Our night among the dinosaurs and boars 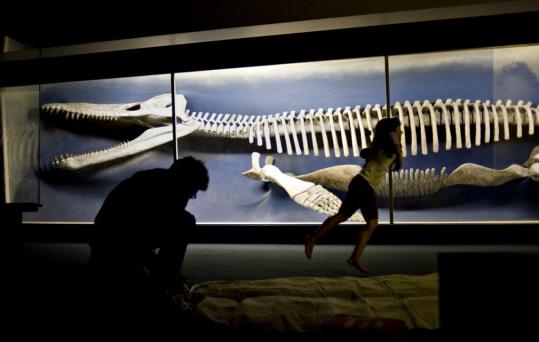 Geoff Edgers and his daughter, Lila (above), prepare a place to sleep in front of the 42-foot-long Kronosaurus while keeping an eye on museum creatures like the wild boar and Mongolian tiger. (Photos By Wiqan Ang for The Boston Globe)
By Geoff Edgers Globe Staff / May 22, 2009
Text size – +

We arrived at Harvard's Museum of Natural History just around 8 p.m., the sun still up but the building closed to the public. Our plan was to spend the night among the dinosaurs, whales, and stuffed birds, which, of course, is the premise behind the sequel that opens tonight to the 2006 movie smash, "Night at the Museum." In that film, the exhibits at New York's Museum of Natural History come to life. My 6-year old daughter and I came to find out what happens when the lights go out on Oxford Street.

Lila, determined to make sure I didn't get scared, loaned me a one-eared, brown stuffed dog.

"Daddy, where do we sleep?" she asked as soon as publicity director Blue Magruder turned the key to let us in.

Anywhere, I told her.

Lila wasn't playing. She walked straight past the stuffed birds and insects and decided we should blow up our air mattress next to the Kronosaurus, the 42-foot-long prehistoric marine reptile.

In the original "Night at the Museum" starring Ben Stiller, and in the sequel, "Night at the Museum: Battle of the Smithsonian," the museum director, played by Ricky Gervais, is a bitter, bow tie-wearing meanie. At Harvard, the 150-year-old museum is run by Liz Werby, a Brookline native who isn't interested in stern lectures. She and Magruder started the night by offering a glass of merlot and slice of zebra-striped cake.

Even though the original "Night" made $574 million worldwide and drew great attention to national history museums, Werby admitted she wasn't a fan.

"They didn't have to do those things to make the museum cool," she said. "I didn't think they had to accentuate some of the oddities to make it cool. The real stuff is just cool the way it is and our imagination can do better than a movie can do."

Werby also didn't like the way the museum director was portrayed.

"He was so stuffy and obnoxious."

Werby showed Lila around, from the live centipede in the arthropods gallery to the massive whales hung in the oldest area, the "Hall of Mammals." Then it was time for the director to turn out the lights, around 10 p.m. And that's when the museum came alive.

My daughter and I both knew that Robin Williams wasn't about to ride in on a horse and that little, dart-shooting men weren't going to attack our sleeping bags. But there was undeniably magic within these walls.

The Natural History Museum is a throwback, proudly retro. No computer labs. No architectural flourishes. Just the beauty of lifelike taxidermy, from the rippled muscles across the Mongolian tiger's back to the multicolored splendor of the ring-necked pheasant.

With a flashlight, I wandered down the walkway housing the African and South American animals. A ceiling fan rattled overhead, the only sound I heard besides my own footsteps. The open mouth of a hippo caught my eye as did the fierce look of a maco shark. In the dark, even the smaller, completely harmless creatures - rats, squirrels, hedgehogs - seemed to become as menacing as lions, and tigers, and bears, oh my.

"It gets pretty spooky," said Tesalon Bishop, a security guard I encountered making his rounds in the dark. "In the daytime you can tell they've kind of been stuffed. At night, out of the corner of your eyes, you might think, 'oh man.' "

Seldom is anyone here at night. In the past, the museum did try to run sleepover programs, but they didn't earn enough money to pay for themselves. And that's also true in the larger museums featured in the "Night" movies. Most filming for "Night at the Smithsonian," took place on a soundstage in Vancouver, not at the Washington, D.C., institution.

"And we don't have sleepovers," said Smithsonian spokesman Becky Haberacker.

By now, Lila, who had been reading, turned off her flashlight and went to bed. It was past 11. I made my way around the galleries. At roughly 30,000 square feet - the New York Museum of Natural History covers 1.6 million square feet - I could easily negotiate the space. I did constantly feel drawn back to the "Hall of Mammals," which is largely the same as it was 100 years ago.

My favorite spot, even from childhood, is directly under the giant right whale, next to the yak. It smells musty, like the inside of a closet. There is so much to see, from the bats to the series of skeletons showing the march from monkey to man.

And that's when I heard it. Not a dinosaur's roar, but a child's voice, calling from down the hallway. It was Lila and she needed me.

It was dark in the Kronosaurus room but that wasn't bothering her. Just a few hours earlier, she had giddily consumed zebra cake and jelly beans before devouring the books she'd brought with her. Now, she turned to me and said, "I have a stomach ache."

Faster than a pronghorn antelope, Lila leaned over the side of the air mattress and began to throw up. I caught most of it on the cover of her Berenstain Bears book, thankfully, but I knew we wouldn't make it till sunrise.

For us, our night at the museum would end at 2 a.m.