Cascade of cute cons doesn't know when to quit 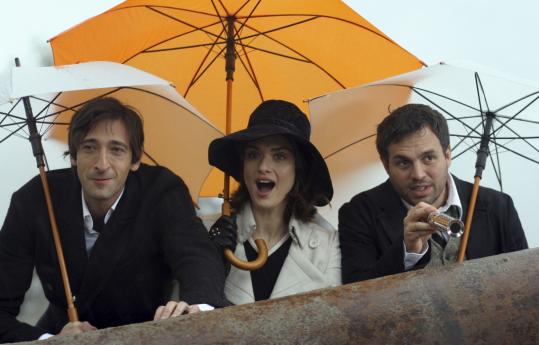 There's clever and there's clever, and "The Brothers Bloom" is so self-consciously, adorably, aggressively clever that it ties itself in knots even before the title credits come on. A con game about con games, the second film from writer-director Rian Johnson is breezily enjoyable for about 10 minutes, until you realize the entire movie is going to be pitched at the same exuberantly manic pace. It's like being trapped in an elevator with a performing poodle that doesn't know when to quit.

There are two brothers Bloom, the older called Stephen (Mark Ruffalo) and the younger simply Bloom (Adrien Brody). Orphaned at an early age, they've spent their childhood shunted from one foster home to another, an experience that has fostered an us-against-the-world mentality and a love of the long con. Stephen's the mastermind; he delights in separating wealthy people from their money, setting up elaborate plans that unfold over months of high-wire living theater.

Bloom, by contrast, is miserable - does anyone mope as spectacularly as Adrien Brody? - because he longs to be more than an actor in his brother's brilliant chicanery. He keeps quitting the life and getting sucked back in, trotting the globe after Stephen until he pulls up, with a start, at the feet of Penelope Stamp (Rachel Weisz), the brothers' latest mark.

They meet extremely cute, Bloom soaring over her yellow Lamborghini in slow motion on a bicycle. Penelope is an unimaginably rich heiress who adopts other people's hobbies out of boredom - chainsaw juggling, making pinhole cameras from watermelons - and she's longing for excitement. The brothers, pretending to be antiquities dealers after a priceless manuscript, are her ticket to adventure, and then there are those longing glances between her and Bloom.

"The Brothers Bloom" isn't pitched as a movie, per se, but as a succession of set-piece scenes, some funny, some flaccid, all racing with knowing but overworked wit. Sight gags, bon mots, inside jokes, studied wackiness - if ever a movie needed Ritalin, it's this one. The problem isn't with the film's hyperactive invention but with the way it calls attention to itself; you never forget how dazzled you're supposed to be feeling. Johnson's first film, the high school crypto-noir "Brick," was just as much a conceit, but at least it breathed.

This, by contrast, is the kind of sophomore slump that may be mistaken for artistic progress. Brightly shot by Steven Yedlin and briskly paced by editor Gabriel Wrye, "The Brothers Bloom" is the work of a very smart filmmaker let loose in the toy room. There are people who love this sort of thing, and if the films of Wes Anderson - to which "The Brothers Bloom" has been rightly and wrongly compared - put you in a state of rapture, by all means go and marvel at this film's glittering pieces.

The most rewarding are the performances, particularly Rinko Kikuchi ("Babel") as the brother's hotsy-totsy silent partner, an explosives expert with fetching taste in headgear. Robbie Coltrane and Maximilian Schell turn up as accomplices in the con, one invited, the other a party crasher. If anyone finds the movie's wavelength, it's Ruffalo, who turns Stephen into a charming, outsize master manipulator desperate to ease his brother's weary soul.

That weariness - an intense emotional exhaustion brought on by oversensitivity to, you know, life - is a worldview that Johnson and Anderson share, and both filmmakers try to keep it at bay with stuff: antic pictorial whimsy that pleases the senses without offering any nutrition. When in doubt, bring on the drunken camel, and does this movie ever. Stephen longs to create the perfect con, "to tell a story so well it becomes real." If Johnson can ever stop using the cinema to play with himself, he might manage the same trick.

THE BROTHERS BLOOM Written and directed by: Rian Johnson