All hail to the brothers grim

Animators Stephen and Timothy Quay are being honored with the Coolidge Award this week. Their work, though often found in the shadows of filmmaking, lights the way for others. 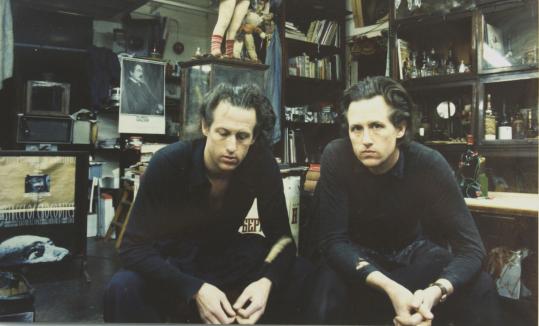 ''What's hidden in the shadows I think appeals to us, what is just on the edge of perception,'' Stephen Quay (left) says of the films he creates with his twin, Timothy. ''You become an accomplice to the unknown,'' Timothy adds.
By Sam Adams Globe Correspondent / May 3, 2009
Text size – +

PHILADELPHIA - Stephen and Timothy Quay - or the Brothers Quay, as they prefer to be called - are often said to finish each other's sentences. But that's not quite right. The twins, who have been making films together for three decades, often don't finish their sentences at all, letting one bleed into the next before trailing off into the ether. Their films, too, seem to issue from a place between worlds, a dim realm in which the line between inanimate objects and living beings is difficult to discern.

With elusive narratives and oblique, even opaque, imagery, the Quays' films occupy a marginal place even in the art-house world. But within a select circle of cinephiles and art school students, the brothers are revered.

Stephen, whose vaguely Eastern European accent belies the Quays' suburban Philadelphia childhood, recalls being invited to give a lecture at the Academy of Motion Picture Arts and Sciences in Los Angeles a few years ago. "We said, 'It's nonsense. You're going to get 17 people there.' Well, a thousand people showed up, and there were queues around the block."

Expect a similar scene on Wednesday, when the Quays will receive the Coolidge Corner Theatre's Coolidge Award as the capstone to the currently running retrospective of their films, which includes some of their rarely seen dance and commercial work. Alongside the screenings, the Coolidge is exhibiting "Dormitorium," a collection of diorama-like "décors" from the Quays' films first mounted in February at Philadelphia's University of the Arts, where the Quays studied illustration before settling in England.

The choice of the Quays for the annual Coolidge Award was part calculation, part inspiration, according to executive director Denise Kasell, who explains that the theater highlights a different aspect of filmmaking each year. Last year's award went to producer Jeremy Thomas; in 2006, actress Meryl Streep was honored.

When they decided to look at film animators this year, the staff knew whom they wanted: the remarkable Quays.

"Part of our mission is to bring you something unusual," says Kasell. "If you can see this person every day, then we're not really meeting our goal."

The call was made and invitation accepted.

"When we announced that they were coming, the calls came flooding in from all over the country, people saying, 'I cannot believe you got them!' " says Kasell.

While it's fascinating to study the Quays' elaborately detailed sets and puppets up close, there's something odd about seeing them in bright daylight. The looming structures of "Street of Crocodiles" (1986) - a haunting stop-motion short film in which a puppet freed from its string bondage wanders through shadowy rooms - don't seem quite so menacing when you can peer into every corner.

The Quays' use of low light makes films like their 2005 feature "The Piano Tuner of EarthQuakes" difficult to appreciate fully outside of a darkened theater. But Timothy, whose years of living in Europe have given him a soft British accent, says that too much clarity would spoil the mood.

"It's crucial to the way you apprehend an object," he says, drinking raspberry-colored beer while the pallid wanderer from "Street of Crocodiles" looks on from a nearby display case. "If you see it in the bright light, you say that is such-and-such an object. But if it's quivering at dusk, and you're having to squint to perceive it, it gives it a different sensibility."

"It's that feeling when you walk into a dark room and it takes the eyes a while to adjust," adds Stephen. "What's hidden in the shadows I think appeals to us, what is just on the edge of perception, of escaping. I think that will always be the allure of it."

In recent years, the Quays have turned toward a hybrid of animation and live action, primarily for budgetary reasons, which also forced them to abandon film for high-definition video after 2000's "In Absentia," a suitably jarring collaboration with composer Karlheinz Stockhausen. Dwindling institutional funding has made things more difficult, but the Quays have always worked close to the bone, spending months on end in their London studio reworking sequences and tinkering with sets.

"It's a very minimal amount of money, but we set our own tempo," says Stephen. "The whole thing is that you know that you're trying to find a language that will suit each perpetration. We're not a studio industry. It's just the two of us, so we don't have to worry. The studio becomes a real, genuine laboratory to discover and try things out."

For the Quays, creating their sets is as much a part of the creative process as designing or animating. "The build is part of the process of discovering," says Stephen. "There might be quite a few false starts. Each one is looking for that thing that we'll intuitively say, 'That's it,' that will vindicate the theme."

He points to a long tracking shot from "Rehearsals for Extinct Anatomies," playing on a nearby monitor, recalling the way they doubled the length of a hallway in the middle of shooting. "We suddenly started to have to build more, because as the camera pulled back more, the space built more. It was something you couldn't foresee, but you knew you had to multiply the space because it told you that implicitly."

"You become an accomplice to the unknown," Timothy continues, "the experience of discovering and constructing it, allowing it to ferment in front of you and capturing it."

The Quays take much of their inspiration from writers like the Polish surrealist Bruno Schulz, whose work inspired "Street of Crocodiles" and whose novel "Sanatorium" they are preparing to turn into a feature. They particularly favor the coded language of works produced under totalitarian regimes, although their own films rarely manifest any political sentiment. Even as children, Stephen says, they were drawn to the covert allegory of Kafka and Robert Walser, whose time in a mental ward inspired the Quays' feature "Institute Benjamenta."

"It was a much more sophisticated language which had to be really read," he says. "It made us feel that you could really multi-layer a realm, and it's not comedy, it's not science fiction: It shifts. You read Walser or you read Schulz, and you realize it's a deep language, and you just try to approximate it with the same depth and density that you see in their work."

In many ways, the Quays' films are best approached as visual music rather than fragmented stories, with recurring themes transposed into different keys. The pencil-tip graveyard of "In Absentia" recalls the spinning screws of "Street of Crocodiles," and several props, like the broken tennis racket slung over a wire in "This Unnameable Little Broom," make repeat appearances in later films.

As Timothy says, "You don't listen to a symphony and say, 'That's a really lousy narrative.' "