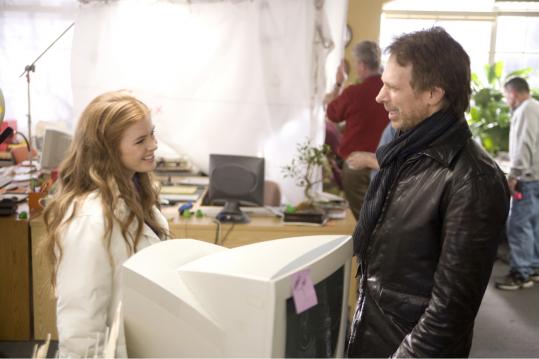 Jerry Bruckheimer has been producing movies for more than 30 years. A lot of them you've heard of: "Flashdance," the "Beverly Hills Cop" movies, "Top Gun," the "Pirates of the Caribbean" movies, the "National Treasure" movies.

Bruckheimer, 63, is also producer of the "CSI" franchise. Over the past decade, he's become an increasing presence in television.

"Confessions of a Shopaholic," Bruckheimer's latest movie, opened Friday. Based on Sophie Kinsella's best-selling novel of the same name and its sequel, "Shopaholic Takes Manhattan," the film stars Isla Fisher in the title role. She's a magazine journalist in New York who should have direct deposit at Barneys. The bigger her wardrobe, the smaller her bank account. Think "Devil Wears Prada" goes on a shopping spree with "Sex and the City," with a soupçon of "Working Girl." Hugh Dancy plays the love interest.

Bruckheimer spoke with the Globe recently by telephone from Los Angeles.

Q. You're best known, probably, for epic undertakings like the "Pirates of the Caribbean" movies. How different is it for you making a smaller-scale comedy like this?

Q. What drew you to this script?

A. It's the character. She's such a terrific girl. You fall in love with her. She's so zany. And her voice.

Q. How do you think the story will play in the current economic climate?

Q. So a movie with subject matter like this might be even more attractive to audiences these days?

A. I think so. Isla Fisher's character has a lot of credit-card debt and comes up with a very creative way to get out of it. It's certainly a lesson we can learn. A lot of us have credit card debt.

Q. How do you think the current economic situation is going to affect Hollywood generally?

A. All the companies are laying off employees. There will be fewer deals. Budgets will be tighter. It will shrink the business, I'm sure. That's not necessarily a bad thing. When you look back on some of these weekends when you have five, six movies opening the same day, they cannibalize each other. So with fewer films it's better for all concerned. Even the consumer - it's easier to decide what to see.

Q. "Producer" is one of those job titles everyone recognizes but nobody really knows what it entails. What exactly do you do?

A. If you're a sports fan, there's a good analogy. It's akin to the general manager. He's the one who hires the coach and players but doesn't own the team. This team - this movie - is owned by Disney. I just run it for them.

A. My favorite is working in the editing room: shaping the movie, seeing it come together. The least favorite is scouting locations. It's a bunch of people in a van driving around for 18 hours looking out the window. Ugh.

Q. You've been producing movies now for more than three decades. How has the business changed in that time?

A. It's changed enormously. The biggest change is the blockbuster mentality. It used to be you could open a movie in just 10, 20 theaters and nurture it. Now everybody goes wide - 8,000, 9,000 screens. There are a lot more screens, too, of course. The movies are a mature business. Whereas before it was still a holdover from the '40s and '50s.

Q. What if you hadn't become a producer?

A. I might have become a photographer, actually. I still have my camera and take photos on the set.

Q. So could you see yourself doing a book of your on-set photos, the way Jeff Bridges has?

A. Maybe some day.

Q. Who plays the lead in "The Jerry Bruckheimer Story"?

A. I have no idea. I leave that decision to more talented people than me.