Coming to grips with end of life 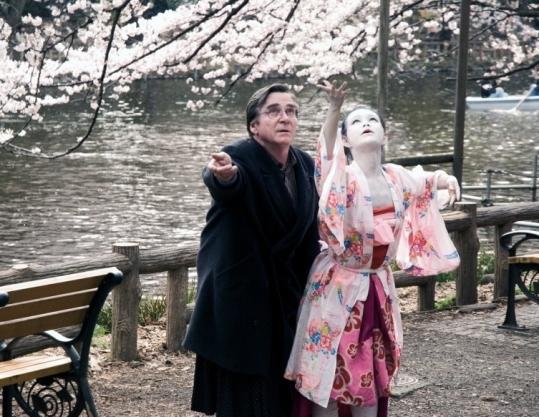 The German director Doris Dorrie has had a wayward and cheerfully bizarre career. After her dry feminist farce "Men" hit big in US arthouses in 1985, she came to Hollywood to make "Me and Him" (1988), a comedy about a talking penis, then returned to Germany for a string of movies in which her love of Japanese film and culture has played an increasingly large part. (She's a practicing Buddhist whose last film, "How to Cook Your Life," was a fine documentary about Zen chef Edward Espe Brown.)

Her latest, "Cherry Blossoms," follows an aging German couple as they come to terms with the end of love and existence. It's a strained but heartfelt work of muted sentimentality, obvious in its symbolism but grounded in a sense of life's preciousness and brevity. Depending on your mood and indulgence, you may weep or you may be left out in the cold.

Curiously, the first hour is a virtual remake of "Tokyo Story," the 1953 Yasujiro Ozu classic that for some people is among the greatest and most humane dramas ever put on film. Again we have the retired country husband and wife (German TV star Elmar Wepper and Hannelore Elsner) coming to the city to stay with their grown children; again the older couple is marginalized and ignored by a younger generation with no time and a basket full of grievances. The daughter played by Birgit Minichmayr is an even nastier piece of work than Haruko Sugimura in Ozu's original, but it's her girlfriend (Nadja Uhl) who takes the role of the one outsider who genuinely cares for the old couple.

Dorrie even replicates Ozu's famed "pillow shots" - still-life images that bridge scenes - but she does have more on her mind than mere homage. The wife, Trudi, is a meek hausfrau with an inner passion for Japanese Butoh; told her husband has a fatal illness, she chooses not to inform him but instead pushes him out of the nest to see the world before it's too late.

At first they get only as far as Berlin and the Baltic coast, but then an unexpected event propels "Cherry Blossoms" past Ozu and into its own territory. The husband, Rudi, takes it into his head to visit Japan, staying with his impatient accountant son (Maximilian Bruckner) in a cramped Tokyo apartment and stepping gingerly out into a head-spinning alien culture.

An odd and touching figure with his thick glasses and Tyrolean hat, Rudi is moved by grief and love to do what his wife never could. Wearing her cast-off sweater and kimono as if to bond with her memory, he befriends a homeless Butoh dancer (Aya Irizuki) and ventures toward Mt. Fuji and farther off the map. The relationship between the old German and the young Japanese girl is privileged and beyond notions of May-December romance - she's his spirit guide, bringing him at last to a place he's always been.

There's meat and sustenance there, but "Cherry Blossoms" too often traffics in shopworn Western notions of Japanese culture; it's a pilgrim's-eye-view of Zen. Dorrie's motives are above reproach - treasure the mayfly moment, honor those who truly see you, dance as much as possible. She's seeking transcendence, but while her characters may find it, the movie never quite breaks its earthly chains.