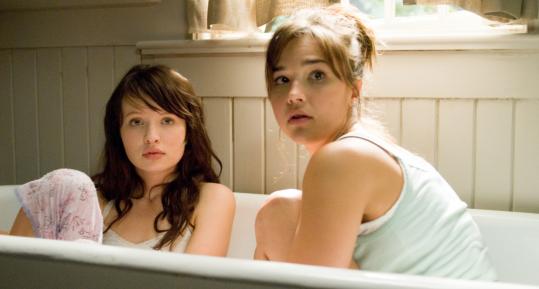 Why is it in horror movies that bad things always happen to the same girl? That girl, who's somewhere between "Juno" and "One Tree Hill," has two emotional gears (scared, not scared) but looks pretty good in layered camisoles and often sees the dead.

I had plenty of time to think about this during "The Uninvited," a brutally inane movie that opens today. Its protagonist Anna (Emily Browning) has just been sprung from a mental institution and is picked up by her author father (David Strathairn, making a mortgage payment). He drives her to their waterfront manse in Maine, where she reunites with Alex (Arielle Kebbel), her sarcastic, inebriated older sister. (This sounds loosely like the beginning of "Rachel Getting Married," but never mind).

Anna lost it after an only-in the-movies house fire killed her mother. Rehabbed, she begins to suspect that her late mother's former nurse, who has become her father's girlfriend, might have set the fire. (Elizabeth Banks plays her with entertaining obviousness.) How does Anna know? The nubile nurse's alleged victims return from the grave to tell her so.

Unofficially, "The Uninvited" is a remake of the passably spooky Korean gothic, "A Tale of Two Sisters." But the name of the original movie's maker, Kim Ji-Woon, never appears in the credits or press notes, where names like Hitchcock, Polanski, and De Palma are delusionally dropped. The film's producers also made "The Ring" and "Disturbia," and it looks like they just decided to hire hacks to make a lucrative new sandwich of their old hits.

Kim's 2003 film is mentioned only as "underlying material." Hopefully, he's been compensated. This Hollywood version required three credited screenwriters and two directors (they call themselves the Guard Brothers), and I defy any of them to explain the movie they've made. I also defy them to explain Anna's father's latest novel. "The Repose of Sand." Really?

"The Uninvited" is a mess of styles and stolen ideas, including a plot twist that would make M. Night Shyamalan roll his eyes and dialogue straight from a CW scene generator. This hardly scared the horror partisans the night I saw the film. For almost 90 minutes they cracked up and sassed the screen. Were we at a scary movie or "Paul Blart"?

No one involved with "The Uninvited" has talent for building suspense. So it's up to ghoulish children, say, to pop from under the stove and jolt us. This kid warns Anna about her wicked - and wicked hot - stepmother-to-be ("You're next!"). I'm sorry, but have you ever looked under the average kitchen stove? What's actually under there is a lot more frightening.