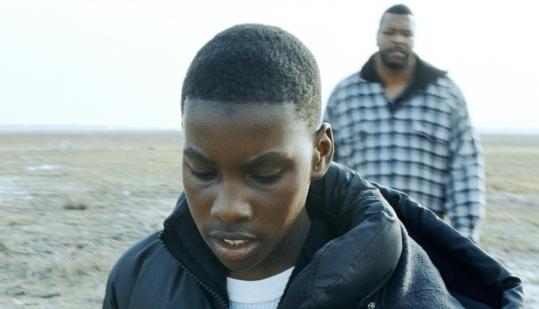 You don't know anybody at the start of "Ballast." The actors are mostly untrained, and the writer and director Lance Hammer had never made a feature. But as you head up the aisle once this magnificent movie has suddenly, bluntly ended, they are all difficult to forget: three people holding onto each other in order to stay afloat and a filmmaker praying for them to succeed.

The movie is a beacon of independent filmmaking, not simply because Hammer opted more or less to self-distribute it, but because it's evident that we're a million miles away from Hollywood.

In part, this is because the movie is set in the Mississippi Delta. In part, it's the result of style. The camera remains handheld for most of the movie, and the staccato rhythms of Hammer's editing create blips of scenes that comprise a story. In other words, "Ballast" is a work of realism. In the second scene, an older white man pulls up to the door of a little one-story house surrounded by almost nothing but gray sky and grass. He knocks on the door. A large, sad-looking black man lets him in but doesn't say a word. The visitor looks around the house and finds a body, on its side in a bed. The large guy - his name is Lawrence (Micheal J. Smith Sr.) - walks out of the house to the home next door and out of the camera's view. We hear a tiny gunshot.

We have no special knowledge of what's going on. And our usual movie-psychic skills are no good here. Scenes seem determined by behavior, emotion, and mood more than screenwriting. The body in the bed belonged to Lawrence's suicidal twin brother, Darius. They lived in twin shacks, and Lawrence spends the rest of movie doubly inconsolable - his brother took his life and he failed to do the same.

When an young intruder pokes his head into Lawrence's front door and holds him at gunpoint, he calmly dares the child to shoot him - "I don't care," he says. The armed little boy happens to be Lawrence's nephew and Darius's son, James (JimMyron Ross), and James needs cash to feed his crack habit.

It's right about there that "Ballast" began to break my heart. Life has just gotten too hard to live. Lawrence honestly believes he's better off dead. No one tells us any of this. Hammer just shows us. The forlorn look on Smith's face is just about the saddest you'll see in an American movie. But the triumph of the filmmaking is how unforced and unsentimental it is. Darius's suicide draws together Lawrence, James, and James's loving mother and Darius's bitter ex, Marlee (Tarra Riggs), a woman too busy making ends meet to save her son from himself. What these vividly imperfect people discover together - about each other and themselves - is hardly dramatic by conventional movie standards, but you can feel the earth move as they adjust the weight of the world on their shoulders.

Hammer collaborated with the actors in developing a script, and he appears to know his European realists well - Bruno Dumont, Claire Denis, and especially the Dardenne brothers, contemporary directors whose filmmaking tends to be loose and organic. But Hammer also belongs to an emerging group of American independent filmmakers - Lodge Kerrigan, Kelly Reichardt, Ramin Bahrani, Julia Loktev, Anna Boden, and Ryan Fleck - who explore race and class through the prism of a less filtered style.

As with most performances in such observational filmmaking, the ones in "Ballast" are mostly interior. But in Riggs, Hammer has discovered a little powerhouse of hurt and rage and quick thinking. One cleverly orchestrated sequence has her trudging between the brothers' houses, and the sight of her from behind (pink sweater, maroon track pants, head scarf) is as funny as it is intimidating.

This is the most significant feature about poor black life since Charles Burnett's 1977 "Killer of Sheep," which was rerelased last year. Compared to Burnett's dreamier film, "Ballast" is like a realist melodrama. That sounds paradoxical, like saying a freshly painted wall looks matte and glossy. Melodrama manipulates situations to wring emotion. Sometimes realism just hides the strings. In "Ballast," the goal of the form is to become so transparent that all we notice are bodies and faces. It's an illusion, of course. But, boy, does it work.