Grieving the personal and political losses of a revolution 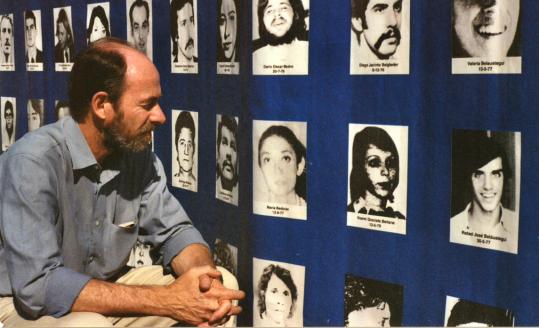 ''Our Disappeared'' filmmaker Juan Mandelbaum looks at images of the Belaustegui children on a tarp with pictures of other missing persons at Memory Park in Buenos Aires. (francisco garcia faure)
By Wesley Morris Globe Staff / October 16, 2008
Text size – +

Many a man has spent a movie searching for a lost love. Few have wound up telling the story of revolutionary South America in the process. But when Juan Mandelbaum went looking for an old college girlfriend back in Buenos Aires, he came back with "Our Disappeared," a tender documentary that recalls how a decade of political upheaval wrecked families, friendships, and whatever was holding Argentina together socio-economically.

Mandelbaum begins the film with a dolorous almost sentimental mission to find Patricia Dixon, an activist he hasn't seen since the early 1970s.

His gauzy personal essay is too luxuriant for the story her vanishing leads him to. The film expands into something altogether more compelling, without forsaking the wistfulness and nostalgia that made him jaunt from his home in Brookline back to his native Argentina, where he reunites with her old friends and his, and with children and parents of old friends. Those friends are missing. They were radicals and activists who, along with thousands of others, were kidnapped, tortured, and never heard from again during the militarist government's anti-leftist campaign.

The film, which was shot on video, deftly weaves the continent's ongoing political upheavals - particularly Argentina's own roiling cauldron of extremism, coups, and corruption - with the recollections of people mourning the missing. The men and women Mandelbaum finds seem comfortably ensconced in today's bourgeoisie, but their memories, angry and sad, demand that their youthful commitment to change be taken seriously. For better and worse, they were once seriously committed to returning the government to the people. Now they, along with Mandelbaum's narration, bring that period of an exiled Juan Peron, deadly military juntas, and tremendous political uncertainty to vivid life.

The filmmaker tours a torture facility or two, but somehow that's not as upsetting as his use of personal photographs and archival images to create a full sense of these disappeared men and women. The movie catches up with Rafael Belaustegui, a conservative businessman, who managed to raise three leftists, each of whom disappeared. Several times the camera pulls up to a single picture of the three kids and on each occasion, after another newly revealed detail - of their relationships with each other, their radical group, and their father - I saw something fresh in the portrait.

"Our Disappeared" precedes "Che," Steven Soderbergh's upcoming film about the Cuban revolution that, among other things, is selectively built around the personality of Che Guevara. Both movies wonder in different ways about radicalism's efficacy, even as the older, wiser leftists in Mandelbaum's film still speak admiringly of Guevara. But something is changed in them now. Not only did the junta take the comrades they love, it stole their fiery idealism.

Written and directed by: Juan Mandelbaum