The unbearable lightness of 'Women' 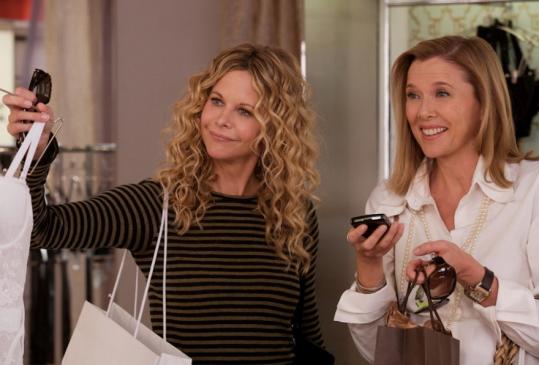 You should start to worry about "The Women" in the first two minutes. Lots of shots of women's legs in expensive shoes come hurtling toward us. We don't get many arms, shoulders, backs, or, God forbid, personalities. Instead, our first close-up is of two sniping dogs.

If Diane English meant to set the tone with a jab of symbolic satire, maybe she could have cast the whole movie with house pets. Instead, she wrangles human stars for her remake of Clare Boothe Luce's manless 1936 play about a troupe of rich New York women - here, Annette Bening, Debra Messing, and Jada Pinkett-Smith - who sic themselves on the mistress (Eva Mendes) of their friend's husband. As the wronged friend, Mary, Meg Ryan trudges through the movie powered on maximum-cute righteousness. Her spunk accessorizes nicely with the cha-cha-cha music on the soundtrack.

Luce's play was dipped in acid, and the film George Cukor made of it in 1939 was a barbed fashion show -cattiness and glamour. Neither one is the riot it must have been all those years ago, but you could see the mockery both wanted to make of rich ladies with too much time on their hands. English has spent years trying to get her remake off the ground. For any number of reasons (many to do with casting), it kept not happening. Now that it's here you have to wonder why she ever fought so hard to see it through.

For one thing, the movie is a work of ambivalence. Is English making fun of these women? Or is she making a pilot for Lifetime? It's hard to tell. Bening's character, the endangered editor of a stagnating women's magazine, is the most sensible of everybody and exhibits what wit the movie has. But within minutes of our meeting her, she enters a Saks Fifth Avenue, and as she eyes the merchandise the screen goes green with a military readout that may as well be from "Predator." We have a bionic shopper on our hands.

Ryan, meanwhile, is all her usual pouts, quirks, whines, and crinkled faces. She's now like a Meg Ryan impersonator. English has given the impersonation all the trimmings, too - galoshes, sundresses, endless golden hair to toss out of her face, a garden to tend while talking on her cellphone, an SUV to climb out of, a giant dog to go bounding around her Connecticut house. Eventually, Mary finds the only trimming that matters: self-empowerment. After the humiliation of a messy public divorce, she straightens her hair (I'd call the new cut Chewbacca Barbie, but you decide) and attempts to make her fashion dreams come true with what can only be described as designer nursewear.

The movie's lightness seems forced to the point of being unbearable: See, girls really do just wanna have fun - and babies and faithful husbands and meaningful careers and anything by Narciso Rodriguez. But glibness doesn't become English - not the woman whose sitcom "Murphy Brown" gave us Candice Bergen as the intelligent symbol of working womanhood and laughed respectfully at the myth of having it all. Now Bergen is playing Ryan's cosmetically altered mother in "The Women" and looking none too thrilled to be. Bette Midler arrives too briefly to make funny faces and a stab at wisdom. But the movie is afraid of gender politics (although Messing's chronically pregnant character might excite Sarah Palin fans) and oblivious to issues of class: Boy, women in the service industry are annoying.

You have to wonder whether shows like "Designing Women" and "Sex and the City," and the shallow movie it produced, long ago obviated the need for a remake of "The Women." Besides it's often less George Cukor or, for that matter, Pedro Almodóvar and more "Sisterhood of the Traveling Pants."

Whenever I wanted to give English the benefit of the doubt, somebody burned a tampon or went on a yoga retreat. Her filmmaking undermines her credibility. This is never more true than when Messing's water breaks and Bening, Pinkett-Smith, and Ryan hyperventilate by her side in the delivery room. Ryan's on the phone. Pinkett-Smith is shoving ice cubes into her mouth and pretending to pass out. Everyone screams while the camera swings like a runaway yo-yo. I wanted something I never thought I would: an epidural.

Written by: English, adapted from the play by Clare Boothe Luce