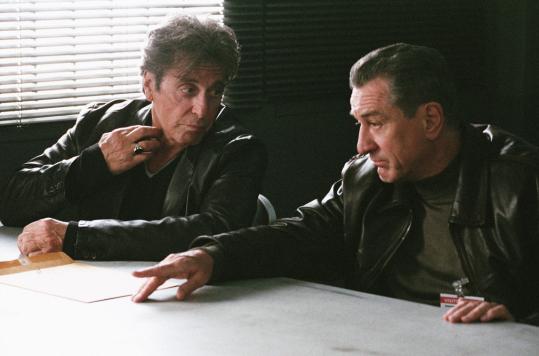 Say it ain't so, Bobby and Al.

Much has been made about how Robert De Niro and Al Pacino seem to have stopped caring about making great movies, but keep working anyway. As hard as that may be for diehard fans to accept, their lackluster performances in director Jon Avnet's misbegotten crime thriller, "Righteous Kill," support the rap.

De Niro and Pacino play veteran New York City detectives who are tired of watching criminals get away with rape, murder, and other heinous acts because of judicial loopholes. Lucky for them, the worst of the thugs start showing up dead, thanks to an apparently like-minded serial killer, who also leaves a poem alongside each corpse. It's as if TV's Dexter failed Poetry 101. Also on the case is a rough-sex-loving crime-scene specialist (Carla Gugino) and two up-and-coming police officers (John Leguizamo and Donnie Wahlberg) who are convinced the killer is a cop.

If it sounds interesting, it isn't. The script by Russell Gewirtz ("Inside Man") is convoluted and often silly; an amusing exchange about the cartoon "Underdog" ultimately feels like Tarantino lite and ("Fried Green Tomatoes") manages to make New York exteriors (the ones that weren't filmed in Bridgeport, Conn.) appear bland and un-cinematic. De Niro scowls his way through most of the movie, and though Pacino starts out strong, he ultimately can't restrain himself and hams up the ending. The pair's mythic collaboration in Michael Mann's "Heat" is a distant memory.

Attention Martin Scorsese, Paul Thomas Anderson, or even Tarantino: Please come calling with some juicy comeback or Oscar-worthy part. Because when actors are as great as De Niro and Pacino, watching them in a movie like "Righteous Kill" is deadly.