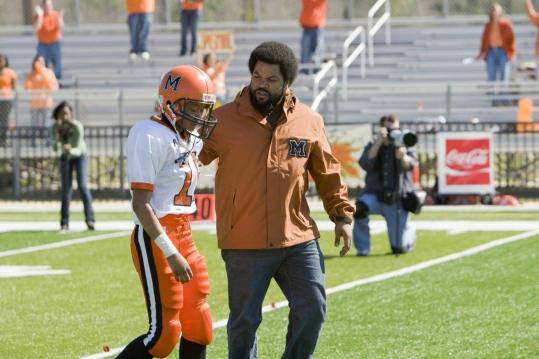 Whose idea was "The Longshots"? It's one of those community uplift family sports movies, this time based on the true story of the first girl to play quarterback in the Pop Warner Super Bowl. But the name above the title is Ice Cube's. He plays a hairy, smelly, loosely depressed ex-football player who trains and coaches his niece, Jasmine Plummer (Keke Palmer) to fame. She's discovered. He's redeemed. And it's entirely possible that the swarms of kids in the audience will care that the grouch from those "Are We There Yet?" movies gets a second chance at life.

But his comeback is at Jasmine's expense. All the oomph and charisma Palmer brought to her last outing as an unlikely community savior in "Akeelah and the Bee" is AWOL. She seems depressed. The discovery that Jasmine has a cannon for an arm brings her some satisfaction, as does using that cannon to take the Minden Browns from Anytown, Illinois, to a weekend in Miami. But this time Palmer never really comes to life. A movie as depleted of color needs some sparkle, and Palmer never gets to provide any. She had more to do in her handful of scenes as a peewee sassaholic with Tyler Perry in "Madea's Family Reunion."

I'm not sure what happened here. "The Longshots" has some nice things going for it. I liked watching Jasmine's chauvinistic teammates come around to her evident talent. And it's nice to see a movie explain the training that goes into improving as a quarterback, since the Brett Favres and Tom Bradys of the world make it look so easy. But it's hard for an adult to fall for any of this.

The loosely misogynistic Limp Bizkit frontman, Fred Durst, directed "The Longshots" from a script by Nick Santora, who's written and produced his share of "Prison Break" and "Law & Order" episodes. Speaking professionally, what Durst knows about the hopes and dreams of 12-year-old girls shows. The movie feels like court-mandated community service and agent-mandated image overhaul. Which might be why the Ice Cube character's redemption dominates the emotional proceedings while Jasmine rarely gets to crack a smile. Tasha Smith, who plays Jasmine's waitress mom, and Jill Marie Jones, who plays Jasmine's teacher, have nothing to do. Two of black entertainment's most no-nonsense women have been asked to play prim, polite props. The uncles and coaches impart all wisdom, while the mom and educators jump up and down cheering in the stands.

"The Longshots" is well-made enough to drive its point home: Girls, you can grow up to do anything, including be directed in movies by a man who once thought you couldn't do much.