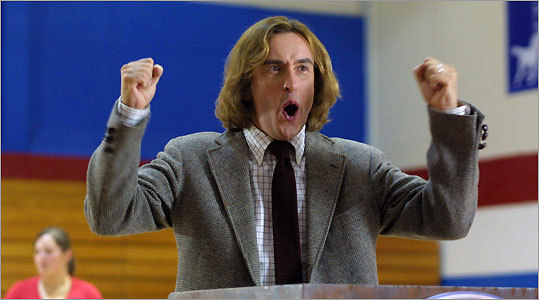 The British farceur and TV comic Steve Coogan has been tickling American ribs ever since he landed here with a splash in 2002's "24 Hour Party People." In the new comedy "Hamlet 2," he comes perilously close to wearing out his welcome. It's actually a pretty fascinating sight.

Coogan plays a failed LA actor and current Albuquerque high school drama teacher named Dana Marschz. The character exists in one of two emotional states, insanely perky good cheer or suicidal rage. But the dream of "the theatah" keeps him propped up, even when no one comes to see his crummy school plays adapted from hit movies like "Erin Brockovich." He has two stagestruck acolytes, a virginal bunny (Phoebe Strole) and a closet case (Skylar Astin), but other than that, nothing. Even Dana's own wife (Catherine Keener, looking bored) thinks he's an infantile twerp.

He is an infantile twerp, and Coogan rubs the character in our face like an industrial-strength irritant. This may be one of the most intentionally grating lead performances in a movie since "The King of Comedy," and it takes a kind of weird bravery to jump out of a plane this high without a parachute. I watched half the movie through my fingers, terrified to see what Coogan would do next in his bid to push the character into new realms of giggling obnoxiousness.

The problem is you never believe this delusional pixie could ever function in the real world the rest of the movie's characters live in. After the school cuts back on electives, Dana's drama class is suddenly flooded with the tough crowd - Hispanics in hoodies, and so on - and the students look upon their bizarre new teacher the way you would an epileptic frog, wondering which way he'll jump next.

The teacher sets out to bring his new flock to the flame of drama, and suddenly you realize "Hamlet 2" is going to be a parody of inspirational inner-city high school movies like "Dangerous Minds," the 1995 Michelle Pfeiffer chestnut. If anything, director/co-writer Andrew Fleming (he made the delightful "Dick" back in 1999) isn't sneaky enough about what he's sending up. The shaky camerawork announces it and so, quite literally, do the characters.

The satire extends to giving the chief bad boy (Joseph Julian Soria) parents who are upper-middle-class intellectuals instead of the poor Mexican trash that Dana (and we) assume they'll turn out to be. They object to their son's involvement in the teacher's new play not because it's sacrilegious but because it's lousy theater. And they're not wrong.

The play is called "Hamlet 2" (the first "Hamlet" was fine as far as it went, but couldn't the ending have been more upbeat?) and Dana pours all his daddy issues into it. He writes in the character of Jesus Christ and gives him a musical number, "Rock Me, Sexy Jesus." The school principal reacts as you'd expect and suddenly Dana and his play are First Amendment darlings, complete with a fire-breathing lawyer (Amy Poehler, not given enough to do).

The big show at the film's end is funny enough but terribly predictable in its toothless desire to offend; only the most humorless bible-thumpers won't have a good giggle. The problem is that few movies since "The Producers" have been able to pull off this sort of shock treatment without seeming smug. In desperation, the movie keeps throwing in wild cards, like actress Elisabeth Shue playing a burned-out fictional version of herself. She's charming and so's the notion of a Hollywood starlet gone to ground, but huh?

Worse is that Dana Marschz never gels into a character that makes any sense. A useful comparison is with Corky St. Clair, the deathless theater junkie played by Christopher Guest in 1996's "Waiting for Guffman." The portrayal was cruel but it breathed real life; you could imagine Corky existing (and having a breakdown) off-screen. Not so with Dana, whom Coogan seems to be making up as he goes. The performance is a series of eccentric riffs without any connective tissue. He's acting in a more daring movie than "Hamlet 2" but it's a far sillier one, too: A one-man show with blinders on.

Written by: Fleming and Pam Brady