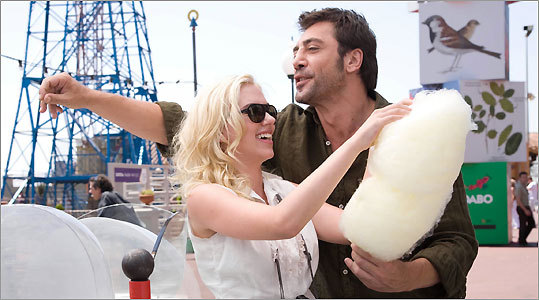 For his last four movies, Woody Allen has been working in Europe - three in London and a new one, "Vicky Cristina Barcelona," in Barcelona. It was initially neat to think of the filmmaker on vacation away from Manhattan (or given his preference for casting Scarlett Johansson, on his honeymoon). It might be time to see what his native New York has to offer again. His next film is set there, but we have to admit that Allen may never come entirely home, if not geographically then artistically.

"Vicky Cristina Barcelona" is fitfully good. It looses two American friends - Johansson's lusty but insecure Cristina and Rebecca Hall's prim Vicky - on Barcelona for the summer. Vicky is doing graduate work on Catalan life and culture. She's engaged to an enthusiastic but unexciting finance guy (Chris Messina), who checks in with trivial updates from Manhattan. Cristina, meanwhile, is trying to figure out who she is and what she wants. According to the narration that opens the film, she's made a 12-minute short about why love is so hard to find.

Both women's lives are upended when a stranger named Juan Antonio invites them both to fly with him to Oviedo for sex. Javier Bardem plays Juan Antonio, and anyone who has yet to forget his grim exploits in "No Country for Old Men" might feel inclined to tell these two to run for their lives. Juan Antonio is a painter, and he comes on strong. If you're waiting for a murder weapon, it's his unrelenting lust ("I came over here with no subterfuge," he assures them).

Vicky is appalled. Cristina is turned on. But they hop in his plane, and Allen manufactures inorganic mix-ups that leave Vicky heartbroken as she watches her friend and this seducer fall for each other. The longer Juan Antonio stays in Vicky's mind the duller her engagement seems. She feels vaguely worse after she discovers Cristina's relationship with Juan Antonio has made room for Maria Elena (Penélope Cruz), another painter and the unhinged love of his life. Could that third person have been Vicky instead?

Vicky compares her conventional relationship to Cristina's sudden, unconventional one and it opens a sad existential void. Simply by staring off into space or squinting into the faces of her costars, Hall, who's English, gives the character real gravity. She's good enough to create an imbalance between herself and Johansson, who has about half the charisma Hall does. How long could a friendship between Vicky and Cristina really last?

Allen has Henry James in his sights. His tale of American women enriched and undone by travel abroad has some resonant insights into the box a committed relationship can trap a lady in. But he relies on trite gags (food poisoning, say) and doesn't go as far as he previously has in dramatizing romantic discontent. The movie doesn't need tragedy, just better realism or better fantasy. For years, the young women in Allen's films - Mariel Hemingway in "Manhattan," Juliette Lewis in "Husbands and Wives," Natasha Lyonne in "Everyone Says I Love You" - actually seemed young. Now his interest in young characters comes at the expense of their youth. Vicky and Cristina could almost have been played by Mia Farrow and Dianne Wiest, and yet they're only somewhat less callow by the end of their adventure.

In too much of "Vicky Cristina Barcelona" Allen is unwilling to apply his wisdom, but every now and then he finds a terrific moment of visual depth. A shot of Johansson radiates in the foreground of an art gallery opening while Patricia Clarkson and Kevin Dunn, as Vicky and Cristina's older, married mentors, gossip nearby. It's the rare time in a movie that Johansson is sexy and believably thoughtful - she flashes the womanly guile her voluptuousness always suggests, and all Allen is watching in that moment is her face. It's a reassuring blip of cinema from a director who lately has been coming up short in that department, too.

During this European interval, Allen has been playing the visitor. He's appeared in only one of these films ("Scoop"), but you can feel him wandering around these cities in bad shorts and a floppy sun hat, holding up a map. He hasn't discovered much as a philosopher or an artist. And only once, in the very good "Cassandra's Dream," have the moral and emotional trappings of the trip compelled him to take some risks.

This time Allen gives us Latin cliches - two hot-blooded, hot-headed artists who use the American who's wandered into their world for sexual tinder. Erotically, the movie couldn't be duller. There's a lovely scene between Johansson and Cruz in the vermillion light of a dark room. But Allen's approach to bisexuality between stars of this magnitude is borderline prophylactic, discussed more than done.

In its way, "Vicky Cristina Barcelona" epitomizes sexual and cultural tourism. Cruz nonetheless manages to transcend mere stereotype. True, she wails, quacks, weeps, hisses, and spits (it's Hurricane Penélope). But there's also tremendous grace in her neurosis. Allen has come looking for postcards for his scrapbook, and this increasingly inspired woman sends him home with a portrait of a complicated lady.

Written and directed by: Woody Allen