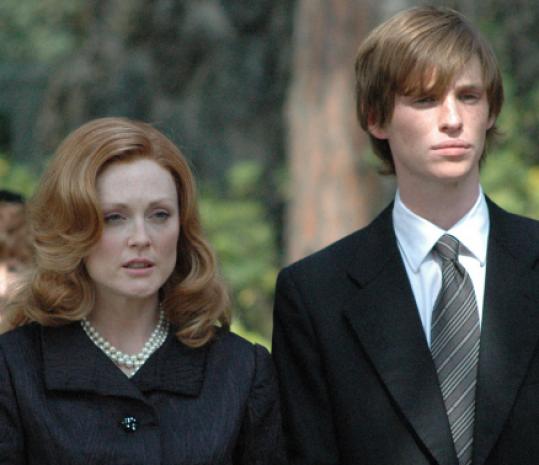 A chilly inquest into very bad behavior, "Savage Grace" is presented to us like an entrée at a five-star French restaurant. It's decadence under glass.

For much of the running time, that's not a bad thing. Based on the 1985 oral history "Savage Grace: The True Story of Fatal Relations in a Rich and Famous American Family," Tom Kalin's film dramatizes the events leading up to the 1972 murder of socialite Barbara Daly Baekeland (Julianne Moore) by her 25-year-old son Antony (Eddie Redmayne). On the surface, it wasn't a crime of passion. Tony was calmly eating Chinese takeout next to his mother's body when the police arrived.

Under the surface was a different affair, and Kalin's approach is to skate atop the ice of this dreadful family's existence and guess at the frigid murk below. The film begins in New York in 1946, when Tony is an infant and his parents have established a mutual loathing punctuated by bouts of wild monkey sex.

Brooks Baekeland (Stephen Dillane, "The Hours") is heir to a fortune - his grandfather invented Bakelite, the all-purpose plastic found in telephones and big clunky bracelets - and Barbara is the Filene's clerk he somehow found himself married to. She's prone to pretentiousness and violent outbursts, and "Savage Grace" shifts limpidly over the years from one European playground to another - Paris, Cadaques, Mallorca - as she descends into the certainty of madness. Because Barbara's very rich, it's excused.

Accompanying her like a faithful dog learning to pull at the leash is Tony. As played from adolescence on by the slim, enigmatic Redmayne (he was Matt Damon's son in "The Good Shepherd"), the character is the sympathetic cipher at the center of "Savage Grace." His homosexuality, elegant and passive, outrages Brooks and troubles Barbara, and it fascinates the director, whose last film was 1992's "Swoon," a pioneering entry in the New Queer Cinema about Jazz Age murderers Leopold and Loeb.

Moore gives a brave performance, as usual; "braveness" has become this actress's hallmark and albatross. She creates in Barbara a monster of selfishness - a succubus who drives off her husband (no prize himself) and pulls her son closer. Moore's features have never looked more bulldog-pugnacious; the most interesting aspect of Barbara is the gauche, grasping shop girl who never fully disappears from sight. Lord, what Barbara Stanwyck might have made of the role.

Sixteen years may have passed between movies, but Kalin is still poking at the blurry line dividing desire and death. "Savage Grace" contemplates passion without sampling it, though, and the film quickly becomes as remote as a magazine spread. Kalin's storytelling style - exactingly composed camera shots, swooping Godardian strings on the soundtrack - remains above the fray, leaving judgment up to us.

This has its advantages. When mother and son eventually cross the line into incest, we look around in alarm; like them, we haven't caught all the warning signs. But there are disadvantages as well: characters so disconnected they never seem quite real, to each other (which is the point) or to us (which isn't). "Savage Grace" gives us a lifestyle in which, to quote one of Tony's lovers, "nothing is true and everything is permitted." That may be fatal to rich families who devour themselves, but it has its dangers for moviemakers as well.

Written by: Howard A. Rodman, based on a book by Natalie Robins and Steven M.L. Aronson