A piercing look at the church's crusading ways 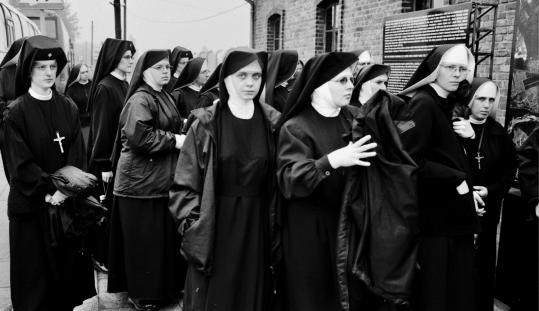 Nuns visit Auschwitz in a scene from "Constantine's Sword," which examines the church's relations with non-believing "others" since the fourth century.
Email|Print|Single Page| Text size – + By Ty Burr Globe Staff / May 30, 2008

A documentary that zooms in scope from the millennial to the profoundly personal and back again has no business working, yet "Constantine's Sword" speaks provocatively to history and our moment. Adapted by author and Boston Globe op-ed columnist James Carroll and director Oren Jacoby from Carroll's 2001 book, "Constantine's Sword: The Church and the Jews: A History," the film is a dense yet fiercely eloquent examination of how and when Christ's message of peace became perverted into an instrument of war.

Carroll's larger point is that this war has been waged over the centuries against non-believing "others" - Jews, primarily, and Muslims - and continues to underlie much Catholic and evangelical Protestant groupthink, up to and including the current US administration. "Constantine's Sword" isn't an anti-Bush screed, though, but a patient condemnation of church fear and power politics from the fourth century AD on.

Through travels to the Vatican and Germany and interviews with scholars, Carroll and Jacoby recast the conversion of Constantine to Christianity in 312 as an expedient way to distinguish himself from the pack vying for control of Rome. "This is the moment when the cross and the sword become one," intones Carroll of the future emperor's vision. "Christianity becomes violent."

The film traces the rise of anti-Semitism as part of church orthodoxy through the Crusades and the Inquisition - "the sin was no longer in [the Jews'] belief but in their blood" - and tosses out fascinating nuggets such as a Jewish family in Rome that has served as dishmaker to the Pope for centuries.

The modern manifestation, and the springboard for Carroll's coolly measured outrage, is the infiltration of evangelical Christianity into the US Air Force Academy in Colorado Springs, Colo., where officers have pressured cadets to convert and marginalized those who resisted. "Constantine's Sword" sees the merging of religious belief and military bureaucracy as a profoundly worrisome development of the post-9/11 era.

"No religion? That's anti-American. We are not an atheistic society," counters pastor Ted Haggard of the New Life megachurch in Colorado Springs. Haggard was interviewed for the film before revelations of his involvement with a male prostitute forced him to step down, and his toothy fatuousness serves as a caricature of hypocritical New Christian zeal.

The film's more valuable for aiming at less obvious targets, such as Pope Pius XII, whom the film accuses of turning a deaf ear to the Holocaust, or the current Pope Benedict XVI, who has blamed the Nazis' "insane racist ideology" on "neo-Paganism" while dodging the church's own culpability. "Every religious person has to take responsibility for the way in which their tradition promotes intolerance and hatred," says Carroll, and his clarity is admirable.

The writer isn't a lapsed Catholic but a deeply disillusioned one who has turned his faith to scouring his church of its entrenched hatreds and blind spots. Carroll's life history is surprisingly germane to the film, since his own father was an FBI agent who rose to become a three-star Air Force general while remaining a devout Catholic; Carroll himself left the priesthood during the Vietnam War era to become a writer, activist, and gadfly.

"Constantine's Sword" should be seen not just as a provocation. Rather, it pulls a viewer back to see the outlines of state-sponsored religious ideology in our history and our current affairs, and it begs us to consider how dangerously far we've come from Christ's message of love for all mankind. The tone is gentle but the message is unyielding: "No war is holy." Period.

Written by: James Carroll and Jacoby, based on the book by Carroll

In English, Italian, and German, with subtitles