In 'Praying,' faith makes a world of difference 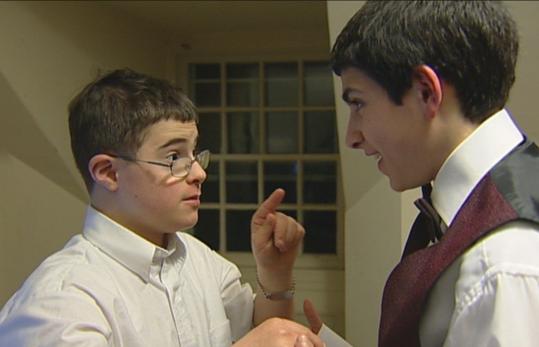 Lior Liebling (left, with brother Yoni), born with Down syndrome in a religious family, is the subject of a new documentary.
Email|Print|Single Page| Text size – + By Janice Page Globe Correspondent / April 25, 2008

Before Rabbi Devora Bartnoff died of breast cancer in 1997, she wrote about parenting a son with Down syndrome. One poignant article in a Jewish newspaper recalls her overhearing someone whisper: "Can you imagine what his bar mitzvah is going to be like?"

Cruel words for any parent to take in. But what the rabbi may not have realized at that moment was they were also an invitation.

In director Ilana Trachtman's "Praying With Lior," Bartnoff's boy becomes a man, celebrating his 2004 bar mitzvah amid more love and tolerance than that whispering cynic could possibly have imagined.

Yes, this is the latest feel-good documentary to turn a spotlight on a much-misunderstood disorder, and per usual it demands that you unleash your sense of humor and table your pity. Fortunately for Trachtman, the lead subject, Lior Liebling, makes that unbelievably easy for audiences to do.

Even in the earliest home movies chronicling his struggles with - and triumphs despite - Down syndrome, Lior is a high-functioning charmer. He smiles continuously, loves unconditionally, and says the darnedest things. But the breadth and impact of his spirit is conveyed most fully in more recent footage compiled when Trachtman follows him around his home city of Philadelphia interviewing family, friends, and Lior himself. As one classmate puts it: Everyone gets tested in life; Down syndrome is Lior's test.

If so, he's passing with flying colors, and part of the reason for that is prayer.

Lior isn't only the recipient of his religious community's blessings and well-wishes, he's also their biggest, purest, least self-conscious voice. Singing louder and flatter than any other worshiper, he davens (prays) day and night, in the temple and on the playground, for no other reason than the joy it brings him.

One of the great things about this movie, which won an Audience Award at last year's Boston Jewish Film Festival, is that no one makes the boy out to be some sort of spiritual leader or miracle just because he's able to chant the Torah and summon speech-ready buzzwords. There's an honest, unfiltered quality to what you see and hear. Lior's devoted older brother remembers calling him a "Chinese frog." His pouty younger sister admits to still being annoyed and embarrassed by him. And his father, Rabbi Mordechai Liebling, reflects on the many tears shed at Lior's birth: "We were mourning hope and possibility," he explains.

That said, a lot of what makes it into this low-budget documentary is mundane, potentially forgettable stuff. There's Lior's speech therapy, a Little League baseball game . . . even a trip to the mall for shoes and other bar mitzvah apparel. It all leads up to a giant party with rich food and awkward dancing, no different from the celebrations thrown for countless other 13-year-old Jewish males.

Janice Page can be reached at jpage@globe.com. For more on movies, go to boston.com/ae/movies/blog.