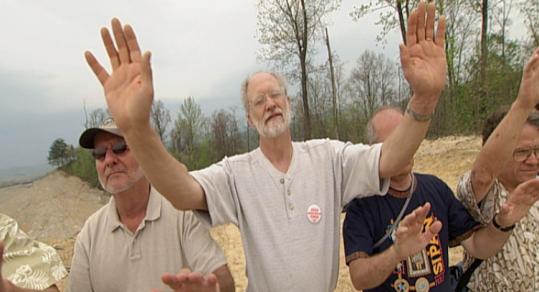 Global warming makes strange but useful bedfellows. "Renewal," a documentary by Marty Ostrow and Terry Kay Rockefeller opening at the Museum of Fine Arts today, traces the rise in environmental activism among religious communities throughout America.

The congregations include evangelical Christians in Kentucky and Muslims in Chicago, Connecticut Jews and Mississippi Baptists. All are striving to preserve what they see as God's creation, and all are increasingly working together as conscious stewards of the earth. Says one of the committed, "What gives me hope on this is that I've never seen a wider coalition."

The film, accordingly, is earnest, idealistic, and fired with the righteous potential of making a difference. And maybe it's right to: When New Mexico Catholics and Native Americans joined forces recently to protest development that was siphoning water from farms, the results were a very pretty community celebration - and pro-environment resolutions passed by the local planning commission.

"Renewal" is really eight short documentaries stitched into a 90-minute whole, each focusing on a local action spearheaded by a different religious organization. Catholics and evangelicals in Appalachia raise awareness of the coal-mining practice known as "mountaintop removal" by flying over in helicopters and videotaping the devastation. (Later they sing "Amazing Grace" while dynamite detonates nearby cliffs.) New Jersey's GreenFaith organization outfits churches with solar panels while teaching them to reduce their own consumption.

California's Buddhist Green Sangha petitions The New Yorker and National Geographic to print on recycled paper; the Teva Learning Center in Falls Village, Conn., teaches Jewish kids about nature and waste. (One of my favorite scenes in "Renewal" shows a group of blindfolded tweeners led up to a mountain ridge and then told to take the blindfolds off. "Oh my God," they exclaim when they see the view, which sums up the film's message in three simple words.)

The two most inspiring segments of "Renewal" - which, after all, exists to inspire - concern Muslims in suburban Chicago and Episcopalians in San Francisco. In the former, a young mother named Shireen Pishdadi contacts rural organic chicken and beef farmers to bring healthy halal food to her religious community. The triangulation between Muslim beliefs, middle American agriculture, and the new philosophy of food promulgated by writers like Michael Pollan gives one hope for the future of eating and civilization.

Led by the Rev. Sally Bingham of San Francisco, the Interfaith Power and Light campaign is a 24-state multi-denominational response to global warming that in one exhilarating sequence descends on Washington to merrily browbeat various elected representatives. "Renewal" documents that religious zeal can be yoked to change as well as conservatism, that differing faiths can speak to each other, and that, really, good works are faith these days. Above all, the film spreads the good news that we're just getting started.

At: The MFA, today and selected dates through March 1