Spoiler alert: 'Cloverfield' lives up to the hype 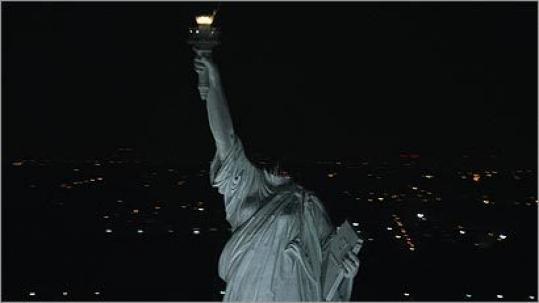 After months of cryptic trailers and postmodern stealth hype, "Cloverfield" turns out to be almost comforting in its simplicity. It's a short, efficient, terrifying monster movie, no more and no less. It's also to New York City and the American psyche what "Godzilla" was to Tokyo: a cinematic fantasy response to unimaginable events. You get scared, you go home, you laugh it off. The real world should play so nice.

The math is preposterously easy, actually: "Cloverfield" equals "Godzilla" divided by "The Blair Witch Project." (And if you want to know nothing more before buying a ticket, stop reading right now.) Told solely from the point of view of one digital video camera wielded by one young guy named Hud (T.J. Miller), the film records scenes from a seven-hour attack on Manhattan by a Giant Thing. It's the first cellphone-ready action flick.

We aren't told where the Giant Thing came from or why it's so mad. Like any proper peep show, the filmmakers (the real filmmakers, I mean) keep us from getting a good look at it, or its little friends, until near the end. At first, it's just glimpsed far down the urban canyons, tossing buildings asunder and using the Statue of Liberty's head as a bowling ball. It is Disaster, literalized.

Hud's fleeing for his life with his friends: brothers Rob (Michael Stahl-David) and Jason (Mike Vogel), Jason's girlfriend Lily (Jessica Lucas), and a sardonic friend of Lily's named Marlena (Lizzy Caplan). They're young, good-looking, generically hip, and played by unknowns who share those qualities. I kept waiting for Scooby-Doo to turn up. Still, casting a familiar face would wreck the movie's this-is-really-happening conceit - it's the gimmick that's the star, and the monster - and the actors' anonymity works for the film. They're just like us, only disposable.

The first 20 minutes of "Cloverfield" take place at Rob's going-away party in an Upper West Side apartment, with some hugger-mugger about his aborted romance with a college friend named Beth (Odette Yustman). Hud's been handed the job of videotaping the farewell testimonials, and we keep catching glimpses of earlier footage he's accidentally taping over, of Rob and Beth's blissful day in Coney Island a month earlier.

These opening scenes play like a "Gossip Girl" episode without the deep philosophical subtext, but soon enough things start going boom downtown. The party takes to the roof for a look, then to the streets, then heads for the hills, which in New York means the Brooklyn Bridge. Given any self-respecting monster's attraction to architectural landmarks, this is probably a mistake. (If you're prone to motion sickness, incidentally, pop a Dramamine; the handheld visuals make the "Bourne" films look like Steadicam work by comparison.)

Eventually, some of our fine young mannequins decide to head back uptown to rescue the stranded Beth, which leads to what's easily the film's best and creepiest sequence: a long journey through dark subway tunnels that ends when someone tells Hud to turn on the camera's night-vision. The suspense waiting for that click of the switch is delicious, the payoff a moment of primal movie terror. You might applaud if you weren't busy screaming.

As with any disaster movie, the film's about helplessness in the midst of cataclysm; late in the game one of the characters moans, "I don't know why this is happening!" "Cloverfield" specifically plays fast and loose with the iconography of 9/11, though: clouds of dust erupting up the city's avenues, the crowds on the bridge, famous buildings sliding down like melting ice shelves. (The filmmakers toss in infectious disease as if it were a free prize.) This would be offensive if the movie were at all pompous about it and about our need to give the real attacks a thorough pop-culture mulching. But "Cloverfield" is content to be a creature feature; that's what makes it bearable and what keeps it from greatness. The genre, not the script, does the psychological heavy lifting.

Yes, there's a script, written by Drew Goddard, a writer and producer for TV's "Lost" and "Alias." The director, Matt Reeves, has written "Felicity" episodes. All three of those shows were created by J.J. Abrams, the producer of "Cloverfield" and the auteur of its brilliant peekaboo marketing campaign. (The title is supposedly the Department of Defense's codename for the attack; actually, it's the name of the street running outside the movie's Santa Monica production offices. It signifies nothing.)

So there's a TV sensibility here that extends to the glossy young cast and the film's short, sharp running time: a 75-minute gallop from the Paramount logo to the start of the end credits. "Cloverfield" isn't a paradigm-buster the way "Blair Witch" was nine years ago, but it does represent the bending of monster-movie cliches to the shallow new world of reality TV and YouTube.

In other words, the movie is fast, personal, and immediate - or it successfully fakes those qualities - and in so doing blows right over its own story holes. So what if one character takes a steel construction rod through the chest and keeps going? Who cares that Hud would need a battery the size of a Prius to power his camera over the long haul? For that matter, why doesn't he put the damn thing down and make a beeline for Yonkers?

Because it's not really happening unless it's on videotape - any kid will tell you that. "Cloverfield" captures the chronic self-absorption of the Facebook generation with breathless, cleverly recycled media savvy, and then it stomps that self-absorption to death. These days, that's entertainment.