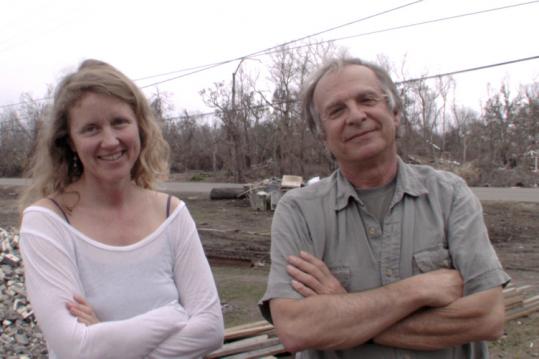 Lucia Small and Ed Pincus co-directed "The Axe in the Attic," a documentary about the aftermath of Hurricane Katrina. (Henry morgan)
Email|Print| Text size – + By Leslie Brokaw Globe Correspondent / January 13, 2008

At the time, Pincus, now based in Roxbury, Vt., and Small, now in Brooklyn, were looking for a project to collaborate on. What was unfolding in the South would be it.

They took a two-month road trip to New Orleans, other parts of Louisiana, Alabama, and Kentucky to collect footage and stories, and have crafted them into a 110-minute exploration called "The Axe in the Attic." For many who saw the events only on television, the title is a grim reminder of news footage of people who had taken refuge in their attics and then had to chop their way out to their roofs when the flood waters didn't recede.

On Wednesday at the Museum of Fine Arts, the movie will be the opening night feature of the Human Rights Watch International Film Festival. "Axe," which got its world premiere at the New York Film Festival last October, will play five additional times at the museum through the end of the month.

"Katrina brought about the largest internal migration in US history, even larger than that brought on by the Dust Bowl," say Pincus and Small in a directors' statement. The movie's dual focus, they say, is "the story of people uprooted and displaced - the Diaspora of Hurricane Katrina" and "what it means to be exiled in one's own country, with a government that is conspicuously absent."

Before he moved to Vermont, Pincus taught documentary filmmaking at MIT for 10 years. Small also lived in the Boston area, and her 2002 "My Father, the Genius" earned her a commendation from the Boston Society of Film Critics for "excellence in filmmaking by a local artist" and the best of festival award at the New England Film and Video Festival.

The co-directors will be at the MFA for a discussion after Wednesday's 7:30 p.m. show.

The annual Human Rights Watch program runs from Wednesday through next Sunday and takes place at the MFA and the Peabody Essex Museum in Salem. It's curated by the advocacy group, which reviews more than 500 films and videos each year to build a traveling festival.

Included on the tour is a reprise from the Independent Film Festival of Boston, "Strange Culture." When it played last April, the Globe's Ty Burr wrote: "In May of 2004, artist Steve Kurtz woke to find his wife dead of heart failure and called 911. The police looked at his art installations, which involved harmless microbe specimens, and called the FBI. The FBI charged Kurtz with bioterrorism. Filmmaker Lynn Hershman Leeson spins an essay on art, government, play-acting, and paranoia; it's easily her best film yet."

The movie is a blend of re-creation and documentary, with Thomas Jay Ryan and Tilda Swinton playing the Kurtzes and an appearance by Kurtz himself. "Strange Culture" plays Thursday at 6:20 p.m. at the MFA and Saturday at 5:30 p.m. at PEM.

The other 13 films coming to Boston and Salem include "Suffering and Smiling," about the Nigerian musician and activist Fela Anikulapo Kuti; "Cocalero," about Bolivian president Evo Morales; and "Enemies of Happiness," about female activist Malalai Joya, who was elected to Afghanistan's parliament in 2005.

CONVERSATIONS WITH: Thomas Doherty, Brandeis University professor and author of "Hollywood's Censor: Joseph I. Breen and the Production Code Administration," will be at the Harvard Film Archive on Friday to talk about the 1934 guidelines that ushered in censorship of "unwholesome" behavior on screen, and the more frank and graphic works that preceded them. (An article by Doherty on the Code starts on N9.) The talk opens a four-day program on "Vice vs. Virtue in Pre-Code Hollywood."

Following Doherty's introduction at 7 p.m. is a double feature from those pre-Code years: the 1932 "Call Her Savage" starring Clara Bow playing, as the HFA says, "a Texas debutante gone bad," and the 1933 "Blood Money" about "a crooked bail bondsman smitten with a nubile and rich nymphomaniac." Details are at 617-495-4700 and hcl.harvard.edu/hfa.

On Saturday, the HFA hosts Thai director Apichatpong Weerasethakul and his 2002 work "Blissfully Yours" at 7 p.m.

SCREENINGS OF NOTE: The Brattle Theatre is in the midst of a week of "Recent Raves," including a double feature of the westerns "The Assassination of Jesse James by the Coward Robert Ford" and "3:10 To Yuma" tomorrow. Casey Affleck was named best supporting actor for "Jesse James" by the National Society of Film Critics last weekend.

The raves continue on Tuesday with a double feature of music biopics: "Kurt Cobain: About a Son" and "Control," about Ian Curtis of the band Joy Division. On Wednesday it's a far quieter highlight: "Into Great Silence" is Philip Gröning's hushed meditation on the life of monks who live in a 17th-century monastery in the French Alps (617-876-6837 and brattlefilm.org).

The Coolidge Corner Theatre is one of 14 independent art houses chosen to showcase selected shorts from last year's Sundance Film Festival. The program opens Friday - the same opening weekend as the Sundance fest in Utah (617-734-2500 and coolidge.org).

Leslie Brokaw can be reached at lbrokaw@globe.com.