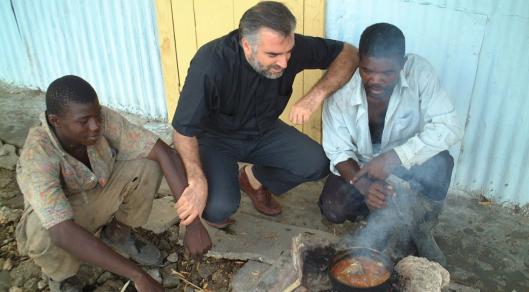 Bill Haney's documentary "The Price of Sugar" offers yet another example of how a lot of what we consume is produced at somebody else's expense. In this case, it's sugar. The movie takes us to the cane fields of the Dominican Republic, specifically those owned by the Vicini family. They staff their plantations with Haitians eager to leave the poverty of home to live a life only slightly less unhappy.

On the one hand, the movie is a messy but moral-minded exposé of the Haitians' horrid working and living conditions and their fight for more freedom and more money than the pittance their employer pays them. On the other, it's a glowing profile of Father Christopher Hartley, the dogged Spanish priest risking his life to fight on the Haitians' behalf. He encourages the cane cutters to go on strike against the Vicinis and brings in American doctors to treat the laborers and their malnourished children (some days, according to the physicians, the workers are left to suck from stalks of raw sugar for a meal).

We meet Father Hartley's Spanish-bred family - he comes from European aristocracy - and hear how they feel about his choice to enter the priesthood. But the movie stints on exploring the fear they must have, knowing that Hartley is in danger. Until much later in the film, when Hartley's English father discusses his son's beleaguered circumstances, we're not sure what his family knows. Hartley is asked to do most of his explaining himself.

He learned a lot about humanitarianism working with Mother Teresa. But his beneficence toward the Haitians infuriates the vaguely better-off Dominicans in Hartley's parish. The perception is that Hartley is helping the Haitians at the Dominicans' expense. Death threats arrive, and banners and signs hang from buildings denouncing Hartley for "Haitianizing" the country (the two nations share one island) and demanding his exit. People familiar with the trouble tell the filmmakers that it's entirely likely that the Vicinis are fomenting the Dominicans' outrage. (According to a story last month in the Los Angeles Times, the family is trying to sue filmmakers; and the furor has become so overwhelming that Hartley was asked by the church to go back to Spain last year, costing the Haitians their most passionate advocate.)

Your heart goes out to everybody in this movie. Apparently so does Paul Newman's. He narrates the film, and you can bet that Newman's Own will be monitoring the source of its sweeteners, if it hasn't already been. But the movie's attempt to individualize the Haitians and show the ways they struggle (while Newman narrates) produces the sort of redundancies that make it feel like an extended pledge drive. Someone has also made the regrettable choice to use shots of raining sugar as transitions between scenes. That kind of mild sensationalism (not to mention wastefulness) seems out of character with the rest of the film.

Of course, the movie, with its statistics about, say, how much sugar America imports from the Dominican Republic, is, in its way, effective. It's been conceived and executed as an instrument of human rights and a tool of shame. But it's the political controversy that's at the heart of this movie - the contempt that one poor country feels toward its somewhat poorer neighbor.

The filmmakers try to find some townsfolk who aren't foaming at the mouth over Hartley. The haters rarely get to articulate their hate, so they seem less than human, which in the movie's eyes is a fair contrast since the Haitians are treated that way. Actually, the rabid Dominicans, namely the local talk-show priestess who leads a charge against Hartley, make for better, if oversimplified, drama. The film culminates with a pair of dueling demonstrations - one for Hartley, one against him; thus one for good, one for bad - and the cutting between the two makes, momentarily, for a riveting movie.