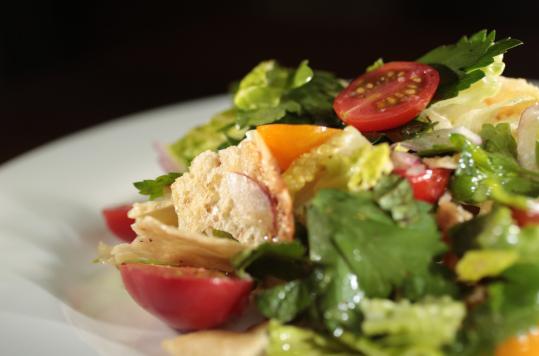 Area Four is less a restaurant than a way of life.

In the morning, it’s the center of the universe. Area Four makes coffee. The good people of and MIT, biotech companies and start-ups, buy coffee. Caffeine fuels innovation. Gears turn. The world changes. All because of coffee. And possibly an almond croissant or scone.

In the afternoon, baristas create latte art and pour-over pick-me-ups. A guy with a ZZ Top beard works at a table, laptop reflecting in the lenses of his Clark Kent specs. Handsome young men wearing oxford shirts in sorbet shades come to fetch iced coffee and sandwiches. The decor is streamlined. There’s plenty of glass, industrial bar stools in silver and red, and concrete floors.

Later, out-of-towners dine solo at the bar, watching food TV and discussing the provenance of vodkas and microbrews with the jovial bartenders. Parents share pizza with precocious offspring. Friends and neighbors run into one another and trade small talk: “How’s the Media Lab?’’ Outside, a woman locks a vintage blue Schwinn to a post that already hosts a nearly identical vintage blue Schwinn.

It’s a Cambridge convergence. Since the cafe opened in May, followed by the rest of the operation in June, Area Four has become Kendall Square’s cantina. It fits into the neighborhood so well it’s hard to believe it hasn’t been here forever.

Area Four takes its name from the Cambridge neighborhood between Central, Inman, and Kendall squares. Behind the establishment are Michael Krupp and Michael Leviton, who last joined forces to open Persephone in Fort Point. That establishment wasn’t as well suited to its environment; it closed in 2009. Leviton is the chef-owner of Lumiere, the consistently excellent French restaurant in West Newton. He’s also chair of the board at Chefs Collaborative, a nonprofit that works within the restaurant industry to promote local and sustainable food.

That’s a focus at Area Four, where the menu is spattered with the names of farms and purveyors. The freshness is apparent in a wonderful take on fattoush, the Middle Eastern salad that here contains toasted bits of pita, romaine lettuce, heirloom tomatoes, cucumber, parsley, red onion, and mint, with a lemony flavor from the spice sumac. It’s apparent, too, in a vibrant gazpacho of roasted local vegetables, or a main dish of meaty, mustard-crusted Chatham bluefish with puckery salsa verde. Paired with scallions, the same catch becomes the centerpiece of an addictive smoked fish salad.

Area Four’s menu features hot and cold small plates, salads, a few main dishes, and seven versions of pizza. Much of the food is produced in the two wood-fired ovens at the center of the restaurant. The kitchen embraces simplicity and lightness, a welcome change from many local menus. Fluffy corn pancakes are paired with sweet roasted corn and a smoky tomato salsa. Smoked tomato is also matched with fresh mozzarella dressed in fennel-garlic vinaigrette. Roasted squid, parsley leaves, chickpeas, olives, and preserved lemon are tossed together for a salad. I loved a version of this dish at Persephone. The first time I try it at Area Four, the squid is rubbery, the flavors out of balance. On a repeat visit, it’s nearly as good as Persephone’s was, a showcase for the underappreciated flavor of parsley.

Even the pizza is relatively light. The crust is thin and on good nights charred and blistered; on one visit the pies were pale and soft, needing more time in the oven. The toppings are applied judiciously, so you can taste them without the pies becoming a gooey mess. The basic margherita is just that - basic. But the pie that features fennel sausage and pickled banana peppers is anything but, with tart and savory flavors. Other worthy choices include a puttanesca pie, with toppings such as green olives, capers, and anchovies, and one topped with cremini mushrooms and fontina, brightened by citrus zest (applied with a too-heavy hand some nights).

Still, the kitchen turns out its share of hearty fare, including a snack of pretzel nuggets showered in sea salt and bits of bacon, with pimento cheese for dipping. It’s concession stand fare made with high-quality ingredients. Macaroni and cheese is creamy and rich, with an unsatisfying croissant crumb topping - soft rather than crunchy. Short ribs are turned into pulled barbecue beef, sandwiched on a bun with slaw and sweet house-made pickles. And if any of the dishes seems too light, never fear - you can add bacon to anything for $2.

Area Four features wine on tap, dispensed from kegs like beer, ensuring freshness and reducing waste. Also available is an assortment of New England brews. The house cocktails are well-meaning, but not up to the level of some of the better bartending in town.

Dessert is one of Area Four’s best events. There’s a dense, fudgy olive oil chocolate cake topped with creme fraiche, salted caramel sauce, and crumbled cookies, and a honey panna cotta with berries and pistachios, both very good. But the highlight is the soft-serve ice cream sundae of the day, based on flavors such as carrot cake, chocolate, and strawberry - whatever suggests itself depending on what’s in season. This can be disastrous, as on the day corn soft serve is featured. It tastes like corn at its worst: starchy, no longer sweet, with the funny aftertaste of canned kernels. Or this can be heavenly, as in a sundae of garden mint and chocolate swirl with marshmallow sauce and sprinkles.

The service is like the soft serve. Some nights it’s on. The hostesses greet guests with smiles and friendly banter, the bartenders crack jokes, the servers are there when you need them, even the cooks manning the wood-burning ovens in the open kitchen smile and thank you for coming in. Like Area Four itself, the staff is relatively, refreshingly attitude-free. Other nights, the servers forget water refills and coffee and any other item you might have requested, disappearing for long stretches. The length of time you must wait for the bill can feel very European or very annoying, depending on your mood.

Kendall Square needed a place that would cater to people’s needs as they change throughout the day, rotating like its seasonal menu. There’s nothing terribly complex about this concept in this location, but for some reason, no one had yet created it when Leviton and Krupp stepped in. Coffee and baked goods in the morning, wine and pizza at night, none of it too expensive to keep you from making it a habit. In a neighborhood of innovators and intellectuals, Area Four is a no-brainer.