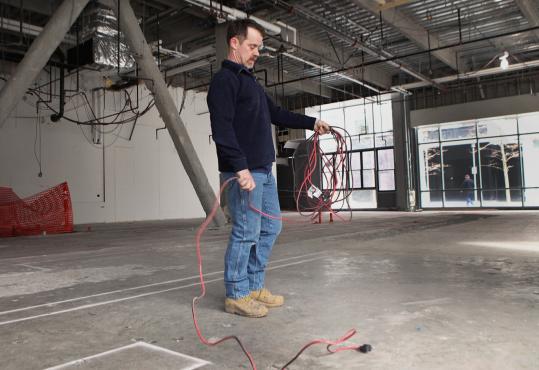 The next big news in biotechnology may not come through a microscope. It could happen over rotisserie chicken and rosemary roasted potatoes.

When Catalyst restaurant opens at 300 Technology Square in Cambridge this summer, it will give the Kendall Square life-sciences complex an advantage over most other business centers: a chef-owned restaurant that caters to corporate culture.

William Kovel, the former head chef at Aujourd’hui at the Four Seasons Hotel in Boston, has teamed up with of Pasadena, Calif., in an attempt to redefine the working lunch for the biotechnology crowd.

“The sale of could be going on in this room and you wouldn’t know it,’’ Kovel said during a tour of the long-vacant first-floor space where he will soon cook in an open kitchen.

For the past year, Kovel has been working with one of the largest property owners in Kendall Square to create a restaurant that would also function as a convention center. Alexandria and Kovel are splitting the project’s costs, which they declined to disclose.

“We’ve had the space there and wanted to find an operator who could create a destination restaurant and a real amenity for our tenants,’’ said Tom Andrews, Alexandria’s regional market director.

The restaurant is in one of the 1.2 million-square-foot office park’s seven buildings. Upstairs neighbors include the biotechnology companies Galenea Corp. and Tolerx Inc.

Alexandria is betting that bistro fare served by one of Boston’s top chefs in a boardroom equipped for video and conference calls will at tract tenants and “serve as a clubhouse for the life-science industry,’’ Andrews said.

Catalyst, which is scheduled to be ready by August, will feature an 86-seat restaurant and function space that can be divided into several zones, using retractable glass walls and an open dining room on one side, a private event space on the other, and a lounge that can double as both. A patio space will accommodate 40 people.

The facility will be able to host up to 120 people for seminars and other events, Kovel said. That’s the magic number for Kendall Square companies that lack conference rooms and have to scramble when they host visitors.

“Once we get to 90 attendees, we are tight on space,’’ said Peter Abair, director of economic development and global affairs at the Massachusetts Biotechnology Council, a trade organization with offices nearby. “Right now, there are not a lot of options in Kendall Square. This is an ideal location in the heart of the center of a lot of activity.’’

Located across the street from MIT’s McGovern Institute for Brain Research and near the David H. Koch Institute for Integrative Cancer Research, Catalyst won’t be in a tourist area. But chefs like Kovel and Jason Bond, who in November opened the popular Bondir restaurant a few streets away, could make this former culinary wasteland a magnet for more than research and development.

“This is the next evolution of how we envision a great restaurant,’’ said Kovel, who was laid off from the Four Seasons when Aujourd’hui closed in June 2009.

On a block with a 7-Eleven and a Quiznos, Catalyst will do more than nourish overworked engineers.

Industry professionals say this culinary-corporate hybrid has the potential to live up to its name. “Having so many bright people bumping into each other helps move our industry forward,’’ Abair said.

While there is conference space at nearby hotels such as the Boston Marriott Cambridge, he said, there is a need for more.

“It’s important to have places for people to meet and to be able to hold meetings in places where people can walk to,’’ said Abair, whose group represents more than 600 companies, institutions, and organizations. “In our industry, if you are off the Red Line, you can’t get people to attend an event.’’

And for a start-up such as H3 Biomedicine Inc., which is expected to move into 300 Technology Square in July, having a convenient place for meetings will allow it to “use the research space as research space, not conference space,’’ Reiter said.

If Catalyst takes off, more urban office parks with such add-ons will pop up, Andrews said.

“There’s been a resurgence of interest in cities over suburbs as places for innovative companies to relocate,’’ he said. “Innovation is fostered in these informal interactions.’’

Abair is already a believer.

“Why didn’t somebody come up with this sooner?’’ he said of Catalyst.