Local menus make the most of its many uses 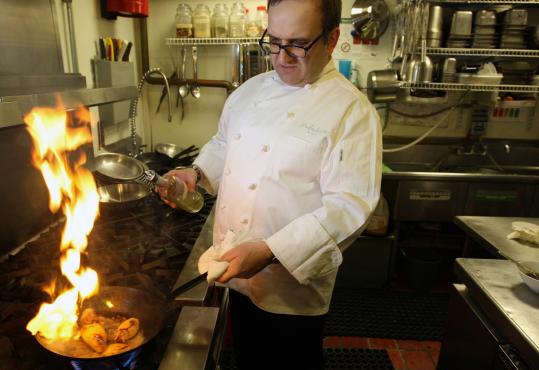 Chef Charles Draghi of Erbaluce puts the squid in a red-hot skillet, searing the edges. He serves it with a vinaigrette or a relish. (Essdras M Suarez/Globe Staff)
By Ted Weesner Jr. Globe Correspondent / March 16, 2011

When Charles Draghi was growing up in 1970s Connecticut, his father liked to return home from work carrying a bag of squid, which he called calamari. It was dinner as usual for this Italian-American family. Most New Englanders had another use for squid: striper bait.

This eight-armed cephalopod has crawled up the food chain. It’s on many restaurant menus. Even sports bars sell fried calamari, which has a wide and ardent following, whether paired with hot peppers, garlic aioli, or just a generous squeeze of lemon. Draghi particularly enjoys working with the small, slippery creature at his restaurant, Erbaluce in Bay Village, where squid might be sauteed and served with a Sicilian garnish.

Squid was once unwelcome on the tables of fussy diners and now is sought after. Carl Fantasia, who runs New Deal Fish Market in Cambridge, attributes it to TV cooking shows and the ubiquity of fried calamari on menus. Fantasia says customers who used to point at squid and holler “disgusting!’’ now hunt it down for a paella recipe.

Fried or baked in paella are two of many preparations. Squid can be put to far more varied and elemental uses. Simmered with chopped tomatoes, a pedestrian pasta sauce is transformed into something bracing and briny. Seared until smoky and delightfully tender, then matched with a toss of watercress and a chunk of toasted baguette, the dish is memorable. The trick to cooking squid might be said to contain a kernel of wisdom. As with a love affair, it’s best given either long or brief attention. Anything in between tends to turn it rubbery and insipid.

Draghi’s father, a lawyer who was often pressed for time, flash-sauteed squid in olive oil and finished it with only salt, pepper, and lemon juice. His son, who turns out distinctive, primal Italian cuisine at Erbaluce, maximizes the flavor but keeps it equally simple. He sprinkles the whole squid, both tubes and tentacles, with salt, white pepper, and a little sugar — a departure from Italian tradition — and drops it in a red-hot skillet. The squid sears on the edges, causing flavor compounds to multiply and smack faintly of licorice. Then he tops the fish with an olive vinaigrette or serves it with a Sicilian-style relish of onion, orange, and tomato.

While squid sees wide application in many cuisines, the Italians also have mastered the long and the slow. A delicious and medieval preparation, originating by some accounts in 15th-century Rome, is called “in zimino’’ and could top the list of easy, healthful approaches to squid cookery. Braised for 45 minutes with onions, carrots, garlic, pureed tomato, and a pile of chopped bitter greens, such as spinach, chard, beet greens or kale, the squid turns toothsome and adds layers of complexity to what would otherwise be a one-dimensional stew.

New Englanders have easy access to some of the best squid in the world. A variety called loligo, or long fin, swims off our shores. The Rhode Island catch off of Point Judith is especially prized. Where supermarket squid usually travels from Asia and tastes relatively bland, the local stock is creamier and finer textured.

Chris Edelman, owner of both Wulf’s Fish Market in Brookline and a wholesale operation, describes his customers, which include some of Boston’s best chefs, as ravenous for the local variety. At Wulf’s, fishmongers who have been in the business for more than 30 years like to cook it up for an afternoon snack. They enjoy it grilled or braised, cooked both short and long. Never in between.

Ted Weesner Jr. can be reached at tedweesner@gmail.com.