A star is born in Hingham 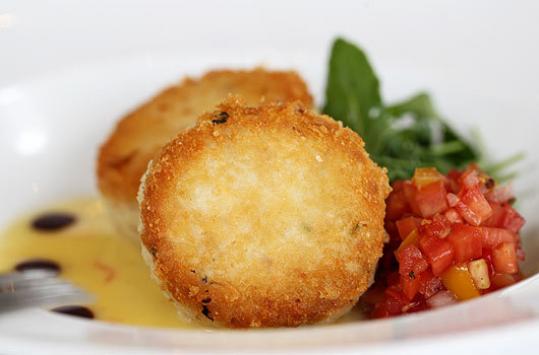 We’re by the fire pit drinking cocktails, because that’s how Hingham rolls — at least since Alma Nove opened here in June. It’s a brisk night to be outside, but business is even brisker. This Tuesday feels more like a Saturday. There’s no room to wait at the bar. Our reservation was for 8 p.m. It’s 9. Inside, the room is all windows and mirrors and white tablecloths, a constellation of lights dangling from the giant wagon wheel-shaped medallion that dominates the ceiling. The crowd is buzzing; through the window, we can see four blondes with collagen highlights liiiiingering over their check. That’s our table. Outside, the drinks are strong, the wind is picking up, and our stomachs are howling. Like a mirage, a man in a chef’s coat appears, walking toward us.

Close. It’s Paul Wahlberg heading our way. He’s the chef brother to actors Donnie and Mark, who are among the investors in this Italian restaurant. (It’s named for their mother, Alma, and her nine kids.) Despite the familial resemblance, it’s clear this Wahlberg chose the right line of work for himself. Previously at Bridgeman’s in Hull, he is a proprietor of the old school — cooking, doling out hospitality, making sure things are running smoothly. “I am so sorry about the wait,’’ he apologizes. “Please, let us bring you some drinks on the house.’’ On another visit, we see him buffing out scratches in the hostess stand.

He also puts together a mouthwatering menu. This is an art not everyone masters. A dish’s description is its calling card, and Alma Nove’s manage to create impressions in a few words: “braised pork meatballs, smoked paprika, coriander, creamy polenta,’’ “tagliatelli [sic], beef short rib, baby artichoke, tomato, braising jus.’’ They are succinct odes to ingredients. (And if the menu is prone to spelling errors and inconsistencies, well, I’d trade my fourth grade spelling bee victories for the ability to make gnocchi as ethereal as Wahlberg’s. They are so light they barely cohere, almost fluffy against a backdrop of meaty wild mushrooms and white truffles.)

The pork meatballs taste exactly as they sound, savory, rich, the smoked paprika bringing their flavor almost into bacon territory. They’re a bit dry, but the tomato sauce pooling around them and the sweet corn taste of the polenta nearly keep you from realizing it.

Eating the tagliatelle is the gastronomic equivalent of putting the down comforter back on the bed for the season. It’s a little sad to leave summer behind, until you dive in. This is warm food but not heavy, the pasta interspersed with tender bites of braised and shredded short rib, sun-dried tomatoes, and meaty little artichokes. It’s incredibly salty, however.

Cod cakes commit none of the sins to which crab cakes are so often prone — namely, a stingy amount of seafood obscured by too much filler. These feature generous amounts of sweet, flaky fish, perfectly crisp exteriors, and a counterpoint of smoky tomato salsa. And a calamari dish is a cleaner, lighter version of the usual fried stuff — here, the squid skips the breading and goes right to the grill, where it picks up a charred smokiness. An arugula salad with lemon-caper vinaigrette extends the light leitmotif.

Halibut is pan-seared, served with a puree of roasted cauliflower. A carrot cumin vinaigrette warms the dish, steering its flavors toward North Africa. The fish is crisp on the outside, moist inside, with none of the dryness that can ruin halibut.

There are times when descriptions are more enticing than dishes. A banh mi with duck confit, pate de maison, cilantro, daikon, pickled carrot, and jalapeno intrigues, far from home on this Italian menu. But the fillings are flavorless and dry, and the bread could double as a puck in a street hockey emergency. Banh mi without a flaky baguette for a base is banh mi best uneaten.

A dish of black olive linguine with seafood also sounds promising, but the pasta doesn’t taste recognizably of black olives; it has a slightly musty, not unpleasant flavor, and a texture reminiscent of whole wheat spaghetti. A special one night features seared scallops with truffle ravioli and truffle cream; the scallops are fine, but you can tell the ravioli is undercooked just by looking at it. A cardboard-textured bite confirms it. A swordfish special another evening features a perfectly grilled, thick piece of fish with risotto that’s properly al dente. But the rice lacks creaminess, and it’s laced with peas and corn that have gone slightly hoary, their natural sugars leached by time.

Pastry chef Christie Radeos turns out desserts that are both simple and surprising. A nut tart is like a sophisticated cousin to pecan pie, a pistachio crust with candied walnuts and a dark chocolate bourbon mousse. It’s a knockout. If the tart is a little black dress, a dessert called “fresh berries’’ is a gingham frock, breezy and light. Macerated berries are layered in a parfait glass with lemon mascarpone, a bit of brown butter cake at the bottom and a drizzle of red wine reduction over the top.

Cocktails tend to be sweet and fruity. If that’s not your pick of poison, you’re better off with a nice glass of Chianti or a Whale’s Tale IPA. The affordable wine list focuses on flavor profiles and highlights several regions of Italy.

Servers are warm, helpful, and attentive, full of advice about the menu and seeing to small details — one evening, for instance, a shared entree is divided between two plates without our asking. But there are pacing issues, and these are dealt with awkwardly. Each time I visit Alma Nove, entrees arrive too quickly, before we’re done with appetizers; the half-eaten dishes are simply whisked away. Pastas are billed as primi but sized like secondi. They can be ordered in half-portions, but the menu doesn’t mention this, and neither do our servers until we ask.

These quirks aren’t keeping anyone away. Alma Nove’s website says it’s “destined to become the new hotspot on Boston’s South Shore.’’ This kind of restaurant prognostication often turns out to be wishful thinking. In this case, it’s simply a fact. Solid to inspired food and stylish surroundings are bringing in the crowds. Fire pits and Wahlbergs don’t hurt either.