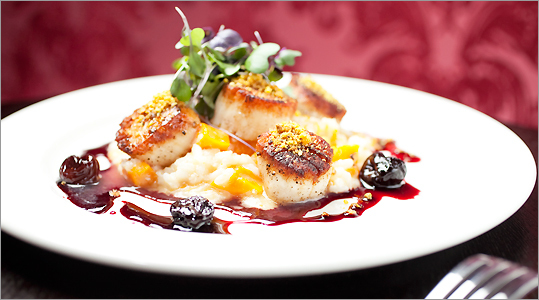 Among the entrees at the Regal Beagle are (above) pan-seared scallops with pistachio crust and a dried cherry glaze, and butternut squash risotto; and halibut with sherry beurre blanc, lentils, and roasted carrots. (Erik Jacobs for The Boston Globe)
By Devra First Globe Staff / January 6, 2010

Come and knock on our door, we’ve been waiting for you . . .

Actually, it’s Coolidge Corner that has been waiting for the Regal Beagle. It’s named for the pub that is the main characters’ hangout in “Three’s Company,’’ that innuendo-rich sitcom of the late ’70s and early ’80s. Every episode involved a hilaaarious misunderstanding. The owners, who also operate the Fenway spot Church, have left no chance for ambiguity at the Beagle. The words “A Neighborhood Joint’’ appear on the restaurant’s sign right beneath its name. The neighborhood has everything it needs in the way of sushi, burritos, Thai food, falafel, and Indian restaurants. But it needed a joint. (Mr. Furley, listening at the door: “Did somebody say they needed a joint? I’m calling the police!’’) Or at least a joint like this, with wallet-friendly American bistro food for brunch, lunch, and dinner, serving late; rotating specials to keep regulars from getting bored; plenty of bar snacks, and the bar to go with them.

Chef Laura Henry-Zoubir has worked at the likes of Hamersley’s, Prezza, Taranta, and the Lanam Club in Andover, and her cooking falls on the ambitious side of pub fare. For bar bites, there are pleasures such as dates stuffed with gorgonzola and wrapped in bacon (why don’t all bars offer these?) and tempura sweet potato fries. These are tender and tasty, even if the batter they’re coated in bears no resemblance to tempura. And orange-tinted pumpkin hummus doesn’t taste like pumpkin, but that’s OK. It’s good hummus anyway, topped with a cool salad of cucumber, feta, and too many red onions, served with pita chips.

Lobster roll sliders could use more filling to offset the little brioche buns, but the salad that is there is well composed, not overwhelmed with mayonnaise. There’s a dish of drawn butter served with the sliders. Are we supposed to dip them? I believe in mayo or butter with my lobster rolls, but not both. More of those sweet potato fries are a slightly odd accompaniment - too sweet.

For some reason, tacos qualify as an appetizer rather than a bar bite. We expect a soft shell but get crunchy instead; they’re filled with pulled chicken, pico de gallo, and avocado mousse. Tacos should burst with flavor. These don’t. They’re bland.

Better is the pork belly appetizer, meltingly braised meat with a simple topping of diced apple salad. A beet salad with shaved fennel promises molten goat cheese, but it’s barely warmed. Satisfying fish chowder features potatoes, pieces of halibut, and a lightly creamy broth tinged with smoke from bacon. It could use a dash of salt and a few shakes of pepper, but there are no shakers on the tables here.

On menus like the Regal Beagle’s, casual is often the way to go. Here, however, it’s the more elegant entrees that please.

Mac and cheese is nicely creamy but blander than the tacos. A burger is standard issue, respectable yet not special, served on a brioche bun with cheddar and sweet pickles. Roasted chicken tastes good, but the skin has gone rubbery by the time it reaches the table.

On the other hand, there are pan-seared scallops with pistachio crust and a dried cherry glaze, served with butternut squash risotto, potentially a disastrously busy combination. Not so. The flavors work beautifully together - lovely scallops with just a hint of pistachio, a nicely acidic sweetness from the cherries, and a well-made risotto. Grilled lamb chops are juicy, thick, and pink at the center, their flavor tweaked with mint and pomegranate syrup. Their goat cheese crust is an anachronism among the otherwise clean, modern flavors. Halibut is a nice piece of seared fish served with sherry beurre blanc, a generous pile of lentils, and roasted carrots. It’s unembroidered and delicious.

Baked fusilli says “Vegetarians welcome here,’’ pasta with roasted cauliflower, chickpeas, tomatoes, ricotta, and more. This, the dates, the hummus, the pork belly, the fish chowder - all things you could make yourself, yes, but things someone else made for you, without charging much for the trouble. At your neighborhood joint, you don’t always want to Dine with a capital D. Sometimes you just want to eat dinner.

And possibly dessert. You’ll find choices such as a plate of cookies; a pumpkin creme brulee in which you can actually taste the pumpkin, more pie filling than custard but good nonetheless; and a comfortingly sweet white chocolate bread pudding.

There’s a little bar area at the back of the room. It’s always packed. So is the restaurant, which is long and narrow, one wall lined in mirrors framed with dark wood, the other covered in crimson damask velvet wallpaper. The waiter might take his time taking your order or bringing you bread, but he’ll joke with you when he gets there. If you sit at the bar, strangers will converse with you. A neighbor might even share his crossword puzzle. The Regal Beagle is about pleasure, not polish. Down at our rendezvous . . .