THIS STORY HAS BEEN FORMATTED FOR EASY PRINTING
Cheap eats

A hangout in the making 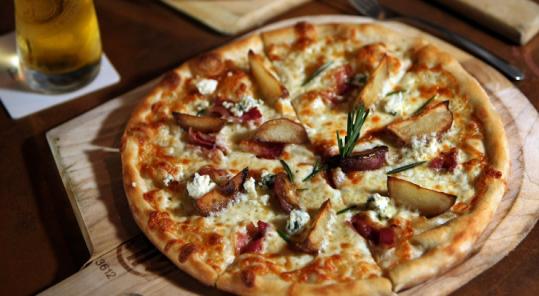 When we step off Causeway Street and into Ducali Pizzeria & Bar, it feels like we’ve left the North End. Two plasmas are tuned to the Sox game, a sound system blares techno tunes, and a young after-work crowd is sipping Harpoon drafts in the spare but cozy brick loft-look space. But Philip Frattoroli had two good reasons for opening his new restaurant right where it is.

Second, Frattoroli, 27, fell in love with Neapolitan-style pizza right around the time he decided the North End needed a new hangout, where locals could watch the game, sip beers, and still sup on good Italian food, sort of a North End version of Cheers.

His formula is simple: $4 microbrew drafts, wine starting at $5 a glass, and $6 to $8 cocktails paired with a brief menu of mainly salads, panini, and pizza.

We start with two pretty trays of antipasti served on wooden pizza paddles. The misto ($8) satisfies with delicate prosciutto; fatty, flavorful rounds of salami; mild provolone; and chips of aged Parmigiano-Reggiano so tasty we let it dissolve on our tongues like hard candy. But while we like that the sott’olio ($6.50) serves up olive-oil-drizzled veggies warm from the oven, they lack flavor.

Over three visits, we witness an uneven kitchen on an upward curve. Just after the July opening, fried calamari ($7.50) with tough squid and a dull coating is disappointing, and a pear salad ($6) suffers from unripe pears. The pizza is, at first, sometimes undercooked and the flavors unfinished.

Later though, a steak and gorgonzola salad ($9) is fabulous, with thin-cut fins of juicy steak seared until crisp at their fatty edges and pink in the middle. Grilled cheese panini ($5) is a gooey, comforting press of mozzarella and provolone on toasty scali bread. And the pizza crust becomes pleasingly thin, chewy, and bubbly.

We enjoy the patate ($8.50 small/$16 large; below), its thin rounds of potato amped up by rich gorgonzola, fresh rosemary, and crispy baconlike pancetta. The tre porcellini ($11/$21) is a meat lover’s feast of peppery sausage, salami, and pancetta. And the margherita ($7.50/$14), though not a classic margherita, would stand out for its flavorful sauce and chopped basil under a chewy layer of browned cheese if they renamed it cheese pizza. But the rugula ($9/$17), a white pizza, needs moisture (mushrooms or red peppers, perhaps?).

Ducali passes the test as a hangout. We’d gladly return for a beer and a pie. As for contending in the pizza wars? Not yet. But this is a spot to keep an eye on.