An early start is crucial to an enjoyable meal 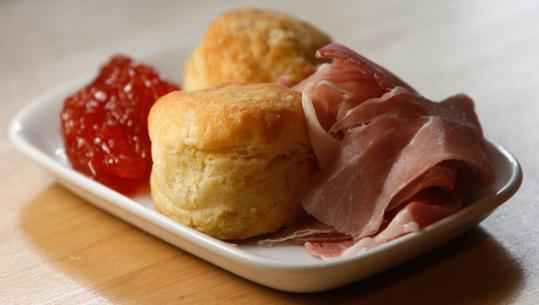 Few sights are as pleasing to the 9-month-old eye as a near-empty restaurant early on a summer evening. Low sun streams in through the windows, glinting off the glassware. Friendly bus staff, not yet busy, play peekaboo as they polish silverware, and every guest who walks into the room gives you the love you deserve. “Oh, a baby!’’ they say, smiling. Someone hands you a biscuit.

When our son was born last October, my husband convinced the owner of India Quality on Commonwealth Avenue to deliver takeout to us at Brigham and Women’s. Since then, the three of us have shared two or three dozen other restaurant meals. Even at 6 months, Alonzo would easily snooze through a Peking duck dinner at Royal East in Cambridge. And one night at Rendezvous in Central Square, a young couple told us we were “like an advertisement for procreation.’’ We were lingering over creamy lemon-buttermilk pudding (one order apiece, because I couldn’t bring myself to share), the baby smiling in his sleep.

But now that Alonzo is in day care and on a schedule, he eats early. Some weekends we’ll go out past his 7 p.m. bedtime to our regular spot, La Voile on Newbury Street, where we ask for quick service and keep him busy with a hunk of baguette. This strategy doesn’t always work. One night, Alonzo tossed his bread aside and insisted on sitting in my lap, so Jason, my husband, had to cut my steak for me. I now tend to order fish or risotto, either of which I can eat with one hand. We have also had dessert packed to go when a meltdown seemed imminent. (Come to think of it, I have a ramekin at home I need to return to La Voile. Restaurateurs are incredibly obliging if you just ask.) And who hasn’t seen a new dad pacing in the bar area with baby while mom looks on, guiltily poking at her main course?

Since restaurants open at 5 or 5:30 p.m., we decided to try dining out then, when we know there won’t be crowds, the specials won’t have run out, and we can all three enjoy ourselves.

The peekaboo-players work at Hungry Mother in Kendall Square, where Alonzo was given that quarter-size, warm biscuit. (The adult version is draped with salty, country-style ham.) After some Gerber and a quick nurse - no one batted an eye, not the staff, not the two gentlemen dining to our left, and not the group of six across the room - the baby fell asleep like a napkin across my lap.

Good thing, too. I wanted to finish my grilled squid with hominy - the excellent dish is very much like the grilled squid with tiny white beans at Delfina in San Francisco - including the fruity olive oil and salty juices on the plate. When my roast chicken arrived next, it was so crispy on the outside, I’d have sworn it was blasted with a blowtorch. (Turns out it’s an air-chilled, not water-chilled, bird, says chef Barry Maiden, so the delicate skin cooks better than most.) Jason got the fried catfish which was crunchy, too, and full of flavor - perfect with his glass of punchy California Zinfandel - and we shared a side of flavorful collard greens, since the main dishes don’t really come with enough vegetables for a nursing mother. Alonzo woke up just as the light buttermilk cake and intense chocolate cream pie arrived; the pie knocked my socks off, sweet and creamy. And the staff moved quickly to bring our check, seeing that their youngest guest was ready to get to bed.

Next up, a restaurant the Zagat guide specifically calls “family-friendly.’’ And it is. At Fire+Ice, parents order giant martinis, sit back, and let their tweens and teenagers roam wild around the sneeze guards. Diners grab bowls and choose from about 100 salad-bar and stir-fry ingredients - thawed frozen corn, raw chicken hunks - and carry their load to a giant iron griddle. Hot-looking cooks, after scraping away what’s left of the last meal and laying down a slick of oil, fry whatever they are handed, trying at the same time to drum up the fun by banging their giant metal spatulas or leading the crowd in “Happy Birthday.’’ The place is so loud you can’t hear yourself chew.

Alonzo loved it. He waved at every passing kid and every passing kid waved back. Our sweet server wondered if there was anything special she could bring for the baby. He gummed a tortilla but didn’t finish his puree from home - he was too busy dancing in his high chair. I didn’t finish my shaved steak (too much gristle) with oily bok choy and lukewarm rice. Jason didn’t finish his flavorless farm-raised shrimp with overly sweet and only-fiery-in-name sauce. At $45 for two dinners, one beer, and one iced tea, we felt ripped off. But baby slept well after all the excitement.

Scampo, in the Liberty Hotel at the foot of the Longfellow Bridge, doesn’t start filling up until 6, so at 5:30 we had our pick of tables, thanks to a considerate host. My parents, in town from Des Moines, were joining us for dinner. Clearly not up for another big night out, the babe fell asleep on the way to the restaurant and didn’t wake until we had eaten, paid, and left. It was like a flashback to the easy old days. The place wasn’t quiet. Two men beside us were doing business over gargantuan 22-ounce veal steaks and families shared selections from the mozzarella bar (we enjoyed grilled asparagus and peaches with soft, mild imported mozzarella and a “pesto’’ of mint, celery leaves, pistachios, and arugula). Butter-poached lobster came with fresh, flavorful Swiss chard; Dad, a gardener, loved even the stems. Sweet, delicately cooked crab risotto came with several bits of crab shell, though it was still divine. I was only disappointed by the fact that I was never brought the takeout box of my meatball pizza, which I had hoped to eat for lunch the next day.

With Alonzo still conked out but the restaurant getting louder, we took a chance on dessert. Meringue Pavlova topped with lemon curd is not exactly in line with Scampo’s mostly Italian offerings, but according to chef Mario Capone, it is one of owner Lydia Shire’s favorites.

But nothing is as sweet as a baby just up from a nap. As the valet was swinging my car around, Alonzo opened his eyes and beamed at his grandma. We hurried home and he ate in his own highchair that night. Soon enough, though, we’ll have him out on the town again - early.

Restaurant critic Devra First will return in a couple of weeks.