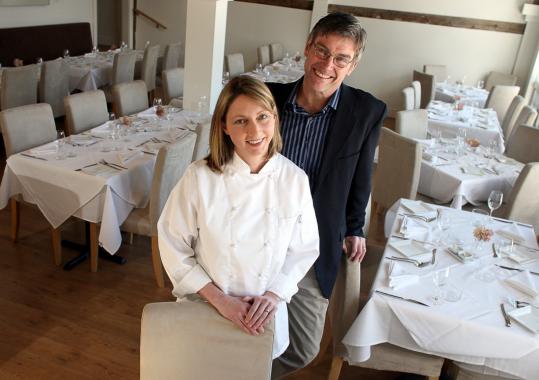 EASTFORD, Conn. - Little in the way of dining or lodging exists in this quiet northeastern corner of the state. "The virtue of our setting is also its curse," says Robert Brooks, who with his wife, Kara, owns Still River Cafe and the surrounding wooded acres that abut the Yale Forest and winding Still River.

Just over an hour's drive from Boston (the last six miles are meandering roads, which roll up and down past farms and forest), Still River has comfy, upholstered chairs and a mostly white, calming, and uncluttered dining room. If the sun hasn't set, you'll have a lovely view of the vegetable gardens out the large picture windows. Restored chestnut roof beams and rafters are what remain of this renovated 150-year-old barn. But it's the food that is the ultimate reward for your travel. Dinner is the culmination of the couple's combined efforts - she is the chef and he the gardener - so she gets to cook what he grows.

There are other chef and gardener partners (one is Cambridge's Oleana chef Ana Sortun and her farmer husband, Chris Kurth), but few had other careers as trial lawyers. Robert, 55, practiced law in Hartford for 25 years; Kara, 39, for seven. When the couple, who live in an 18th-century home on the property, opened Still River two years ago, says Kara, "We were really marrying our two passions of cooking and gardening." Their plans took root during a vacation in St. Barths, when the couple decided to research the island's foods and turned their findings into a book, "Paradise Found: The People, Restaurants and Recipes of St. Barthelemy." What they learned about the inner workings of restaurants was invaluable, they say.

Kara spent the next two years learning how to cook professionally (which included a half-dozen stints in Dan Barber's kitchen at the highly regarded Blue Hill at Stone Barns), while Robert, mostly with the help of two sons, Robert Jr., 28, and Peter, 22, rebuilt the dilapidated barn. He also expanded the existing gardens, producing everything organically, and trucked his vegetables three times a week to local farmers' markets. "I had to prove I could grow on a commercial scale," he says. Today, Robert grows most of the restaurant's produce.

As if these challenges weren't enough, tiny Eastford was one of two remaining dry towns in the state. After the largest voter turnout in the town's history, says Robert, Still River finally got its wine and beer license in December 2005.

Then it was time to develop the menu. Kara decided the entrees and some of the desserts should be tasting plates. The impetus, she says, is "the theory of diminishing returns," which she attributes to Thomas Keller (of The French Laundry and Per Se). "The first bite is great, then the second and third are really good, but after that you get fatigued at some point," she explains. Each of her entrees features three different preparations on the plate, with ingredients and sauces of their own. "The components complement each other but give some variety," she says.

For example, duck comes with a pan-seared breast, house-cured duck leg confit, and a duck liver mousse. Pork lovers will feast on "twenty-hour cassoulet," confit of cured pork belly, and smoked pork tenderloin terrine. And from the sea come seared Nantucket scallops, scallop ceviche, and hazelnut-crusted sea scallops. Plates are artistic without being showy or pretentious. "I don't want to be too cute, but I want the dishes to be visually striking," says Kara.

In all cases, she says, "the garden and the menu work hand-in-hand." Even in the dead of winter, says Kara, "we're serving vegetables we've cellared over such as squashes, beets, fingerling potatoes, Brussels sprouts, and cipollini and sweet onions." Tender microgreens grow in the barn's basement all winter under low-wattage fluorescent lights.

Outside, under translucent, polypropylene mesh "floating covers," are thousands of dormant plants, including radicchio, turnips, leeks, onions, and beets, that have just begun to spring to life with the stronger, late-winter sun. Forty plots of greens, including arugula, mache, and broccoli rabe, are also awakening.

Every week Robert carries kitchen bins of vegetable peels, egg and lobster shells, coffee grounds, and more to the growing compost pile. When the earth warms, he'll add the nutrient-rich mixture to the soil and plant vegetables such as haricots verts, carrots, radishes, and over a dozen varieties of heirloom tomatoes. "We grow a ridiculous amount of summer squash plants because Kara loves their blossoms," he says.

The work is physically hard but satisfying. Even with last year's high gas prices and today's economic downturn, he says, "We have zero regrets."

Remembering his lawyer days, he adds, "After 25 years of making people miserable, it's nice to make people happy."