THIS STORY HAS BEEN FORMATTED FOR EASY PRINTING
smittenkitchen.com | Site Inspection

Big tastes in a tiny kitchen

On her website, smittenkitchen.com, food blogger Deb Perelman describes her kitchen as "80 square feet of fourth-floor circa-1870 New York City walkup tenement building joy with a skylight on top." She has one stainless steel counter, a small gas stove, a carefully curated spice rack, and a pantry full of wedding registry pots, pans, and appliances.

From this tiny space, and usually after a day at the office (she's a technology reporter), Perelman cooks ambitious dinners, everything from hoisin-and-honey pork riblets to Julia Child's coq au vin. She bakes bagels, twists soft pretzels, mixes up English muffins from scratch, and carries on the legacy of her mother's famous chocolate-chip sour cream cake. If the site were a restaurant, I would want to eat there.

The 31-year-old Perelman grew up in central New Jersey, studied psychology at George Washington University, and now lives in Chelsea with her husband, Alex Perelman, an IT manager and part-time photographer for the blog. Deb calls him her "food paparazzi."

The site, launched in the summer of 2006, is packed with the now ubiquitous creatively cropped, shallow-depth-of-field, food-porn money-shot photographs. "I love the process photos, but I hate for the camera to get dirty," says Deb.

Nearly all of smittenkitchen .com's recipes are gleaned from Deb's mother's home cooking repertoire, old issues of Gourmet magazine, The magazine and food section, and favorite cookbook authors such as Martha Stewart, Peter Reinhardt, and Mario Batali. Perelman is not a trained cook, but most of the time she aces recipe after difficult recipe. Her apple pie comes from America's Test Kitchen, but the mounded, lattice-topped beauty baked in her tiny oven puts the pros to shame, and her pretzel rolls - boiled in water with baking soda and sugar, baked to a blistery golden brown, and topped with coarse salt - would be a hit at any bakery. Less successful recipes, such as a "flan flop" that never set and an "irksome quiche" with broken walls, are documented with photographs and good humor.

Perelman had always spent time in the kitchen, but it wasn't until she was married that she began to feel like a cook. "When I got my first apartment I cooked for myself," she says, "but it is so much more fun to cook for two, plus Alex washes dishes, carries groceries, and helps with the leftovers."

And there are plenty of leftovers. To feed the blog, Deb Perelman sometimes has to cook beyond her appetite. "Crazy brownies and macaroni and cheese look great on the home page, but we can't eat that kind of thing everyday," she says. "So we decided that the dinner food is for us, but if I make a dessert it's always for a crowd as well." 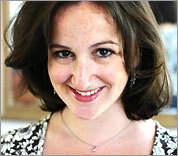