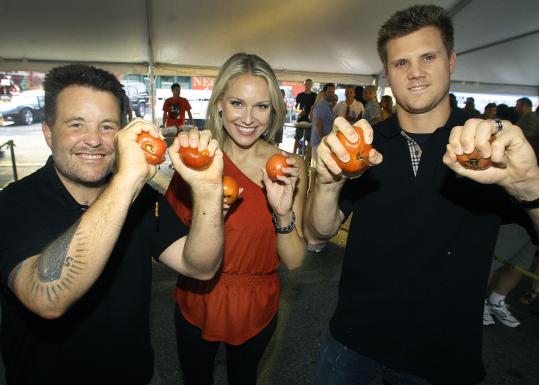 The fallout from the Red Sox historic collapse continued yesterday, as NESN reporter Heidi Watney took to the airwaves to defend her personal and professional reputation. Watney appeared on 98.5 The Sports Hub’s morning show, “Toucher & Rich,’’ to respond to a remark made the day before by Michael Felger, cohost of the drive-time show on the Sports Hub. Felger had referred to an alleged former relationship between Watney and Sox catcher Jason Varitek. (As even casual listeners know, Felger is prone to popping off: He once referred to Bruins owner Jeremy Jacobs as a “thief.’’) Watney didn’t like it. “In the assassination of just about everyone’s character that’s involved remotely with the Red Sox these days . . . [Felger] brought my name in the mix and a rumor that I was linked to when I first got into town,’’ Watney said, “which, by the way, is not true. . . . So [Felger] brings me into this cesspool of garbage that’s being thrown around here.’’ On his show later in the day, Felger seemed contrite, calling his decision to talk about Watney “regrettable.’’ He said even though she’s a “team employee’’ and should be subject to the same scrutiny as owners and players, Watney wasn’t the problem. “It’s not really about her,’’ Felger said. “It’s about the uniformed personnel that contributed to the collapse.’’ Watney didn’t respond to our e-mail.