Celebs flood island ahead of president 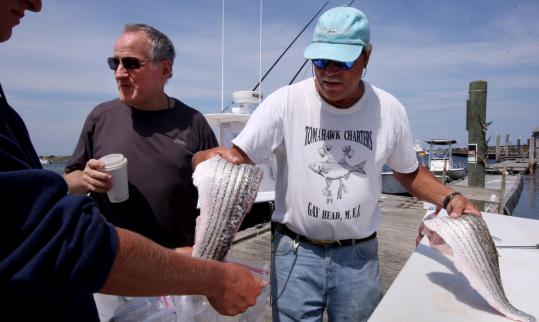 MENEMSHA - To the list of life’s certainties that includes death and taxes, you can add catching fish with Buddy Vanderhoop.

Without fail, the colorful captain of Tomahawk Fishing Charters returns to the dock every day with an armload of fish - stripers, bluefish, sea bass, bonito, fluke, you name it - just as he’s been doing for three decades.

“He’s the best,’’ powerhouse Hollywood director Michael Mann told us yesterday after a successful trip with the Vineyard’s go-to guide. “With Buddy, you go out a novice and you come back a pro.’’

Mann, whose credits include “Public Enemies’’ and “The Insider,’’ is one of several VIPs who regularly fish with Vanderhoop. Conspicuous clients include Harvard professor Charles Ogletree Jr., musician Taj Mahal, directors Spike Lee and Wes Craven, and Rolling Stones guitarist Keith Richards, who’s on the island at the moment and may be going out with Vanderhoop next week. (To be safe, Buddy better pack a bottle of Stoli with the bait.)

Asked if he might finally land the big fish - President Barack Obama - Vanderhoop said he’s hopeful the commander in chief can get off the golf course long enough to catch some bluefin tuna.

For his part, Mann told us he’s been fishing with Vanderhoop for 15 years, and a Martha’s Vineyard vacation isn’t complete without a few hours on the water. The first time, he joined Buddy and actor Jim Belushi, and managed to reel in a 35-pound striper.

“Jim didn’t catch anything that day,’’ said Mann, smiling. “I’ve been torturing him ever since.’’

The director said he’ll probably go out once more before leaving the island later this month. His new HBO series, “Luck,’’ premieres in January.

“It’s about the world of high- and low-life horse racing,’’ said Mann. “It’s got Dustin Hoffman and Nick Nolte.’’

Even amid the heightened security surrounding the president’s visit, no one seemed particularly focused on the first family yesterday - not on the dock at Menemsha; not at Larsen’s Fish Market, where we ran into Lenny Clarke lunching with the Improper Bostonian’s Jonathan Soroff; and not at the Chilmark General Store, where Harvard professor Alan Dershowitz gave us a preview of the talk he was scheduled to deliver last night at an Obama fund-raiser at the Union Chapel in Oak Bluffs. (He was part of a lineup that included Geraldine Brooks, Geoffrey Fletcher, Richard North Patterson, and Rose Styron.)

“I’m talking about the Supreme Court, and who we want choosing the next nominees,’’ said Dersh, who turns the porch of the Chilmark store into his personal office during the summer.

Standing nearby was Lotus founder Mitch Kapor and Seth Meyers of “Saturday Night Live,’’ who said he’s wrapping up a week on the island with his gorgeous girlfriend, Alexi Ashe, and her family.

Meyers, who’s got a gig at the Hampton Beach Casino in New Hampshire Saturday, said he and the “SNL’’ gang get back to work in a few weeks to prep for the show’s season premiere Sept. 24. But, as anyone who follows Meyers on Twitter knows, he’s been working for a while. Last Sunday, just minutes after former Minnesota governor Tim Pawlenty dropped out of the Republican presidential race, Meyers tweeted: “Well, I think I’ve perfected my Pawlenty impression! Can’t wait for the new season to start!’’

Funny, right? Turns out a lot of his 756,000-plus followers just thought Meyers was an idiot.

“It’s amazing how many people don’t get sarcasm on Twitter,’’ he said yesterday.

In Edgartown, where Michelle Obama had lunch last summer with daughters Sasha and Malia, leading the Secret Service to shut down much of Main Street for a few hours, there was a general ho-hum attitude about the president’s arrival. Of more interest are the whereabouts of Richards, the Stones guitarist who’s hardly been hiding during his Vineyard visit. Over the weekend, we’re told, Richards made an impromptu appearance at Nectar’s, joining his friend Ivan Neville on stage.

“It’s sort of like live and let live when it comes to celebrities,’’ said Justen Walker, an employee at Edgartown’s Boneyard Surf Shop, whose customers include Uma Thurman, Bill Murray, and Meg Ryan. “Everyone needs time to chill and be themselves, and Martha’s Vineyard is a nice place to do that.’’