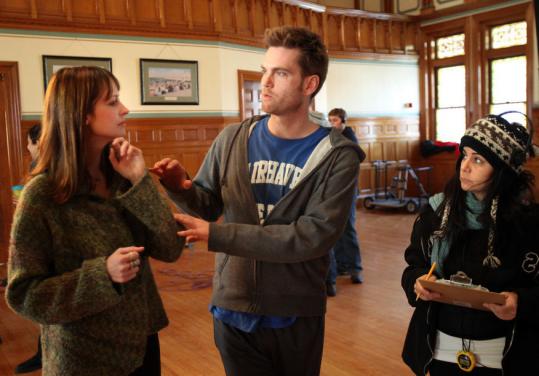 The first floor of Fairhaven’s Town Hall was nice and quiet on Saturday morning, as it should be. But upstairs, the historic building was packed with camera equipment and a bustling movie crew working on the indie movie “Fairhaven.’’ Actors took over the Town Hall’s big, open room and circled around the film’s director/star, Tom O’Brien. A camera followed the Medford native as he and actress Alexie Gilmore, who plays O’Brien’s love interest, finished a scene that involved her character teaching a laughing yoga class. Crew members watched from the next room, giggling at the interplay. Spirits were extra high because it was the end of the monthlong shoot. The out-of-towners were to return home on Sunday and had plans for a wrap party at the Seaport Inn’s bar. “It’s been amazing,’’ said “Fairhaven’’ producer Massoumeh Emami, of the local shoot. “I don’t think we could have made a movie with this budget in many places.’’

“Fairhaven,’’ which is about a local guy on a quest to bring meaning to his life after hearing an inspiring interview with Tom Brady, shot at a long list of South Coast spots including the First Congregational Church near Town Hall and Temptation Gentlemen’s Club in New Bedford. Emami, who produced the 2009 Rosemarie DeWitt movie “How I Got Lost,’’ and worked as script supervisor for the yet-to-be-released Matt Damon movie “Margaret,’’ said she and her crew didn’t anticipate being covered in snow for the entire shoot, but the weather worked out just fine. Actors who live elsewhere (including Chris Messina, of “Julie and Julia,’’ and Rich Sommer, of “Mad Men’’) managed to arrive and depart when they were supposed to, despite the storms. Everyone just kept tabs on how much would fall and when. “Logistically, it wasn’t fun to deal with, but it’s so beautiful,’’ Emami said. No word on when “Fairhaven’’ will be released, but O’Brien and Emami are getting ready to edit. We’re hoping there’s a nice, big local premiere. Maybe at Town Hall?