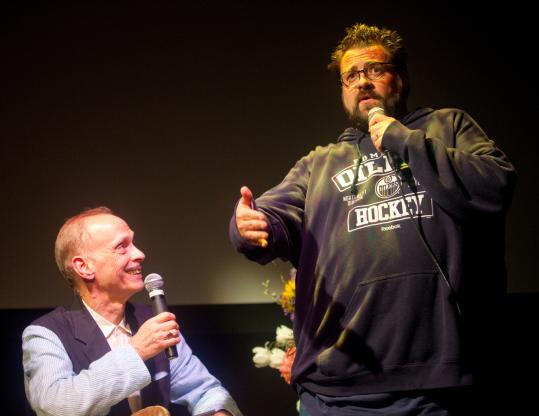 It was the kind of awards ceremony that would have been rated “for mature audiences only’’ if any network dared broadcast it. At what film festival, other than Provincetown, would you find director Kevin Smith talking to legendary P-towner John Waters about everything from battling over movie ratings with the MPAA to Smith’s public fight with last year after he was ejected from a plane for being too heavy? “Can I ask a personal question?’’ Waters said with a cheeky grin. “Couldn’t you afford to fly first-class?’’

Before Waters and Smith had the audience blushing, Scottish actress Tilda Swinton accepted her Provincetown film festival award for excellence in acting. In a conversation with film critic B. Ruby Rich, Swinton said that she does not consider herself an actress and often dreams of retiring to tend to her chickens. Of course it is hard to imagine Swinton, who was looking glamorous at the ceremony and at the intimate after-party with a severe coif and simple black dress and exotic shoes, in the countryside spreading chicken feed.

The after-party saw Swinton laughing with Waters, and “Hedwig and the Angry Inch’’ actor/director John Cameron Mitchell chatting with directors Rob Epstein and Jeffrey Friedman, who were at the festival to pick up an award and show their latest, “Howl.’’ Despite the star power, there were a few disappointed faces because “Howl’’ star James Franco was a no-show. “I can’t believe I got my chest waxed for nothing,’’ said one sad gentleman guest at the party.

. . . and on Nantucket
Not far from the celebs in P-town were the A-listers on Nantucket who gathered to celebrate the Nantucket Film Festival and all things screenwriting. Anne Meara, a staple at the annual festivities, was busy recovering from surgery, but her son, Ben Stiller, was there to crack jokes on her behalf. “She said to say she had open heart surgery and you should feel sorry for her,’’ Stiller quipped. As usual, the highlight of the weekend was the comedy roundtable, which this year featured Stiller, New Hampshire gal Sarah Silverman, Zach Galifianakis of “The Hangover,’’ Andy Samberg of “Saturday Night Live,’’ and moderator Brian Williams.

“Irish’’ Micky Ward, the Lowell-bred boxer who’s the subject of the forthcoming biopic “The Fighter,’’ starring Mark Wahlberg, will be talking about his life in and out of the ring this week. Ward is doing a Q&A with writer Richie Farrell on Friday at Andover High School as a benefit for Team Micky Ward Charities and the Michael Briggs Community Center in Manchester, N.H., named for a police officer who was gunned down in October 2006. “The Fighter,’’ directed by David O. Russell and costarring Christian Bale and Melissa Leo, is due out in November or December.

Covering all the bases

Fenway Park and Yankee Stadium were visited over the weekend by pop divas known for their extravagant, costume-like wardrobes. While Rihanna cheered on her Dodger boyfriend, Matt Kemp, at Fenway, Lady Gaga rooted for the in New York. Who was dressed more appropriately for ballpark festivities? We’re going with Rihanna, who wore simple hoodies and tank tops instead of her usual leather, military-style, and sometimes transparent couture. Meanwhile, Gaga was pantless in a Yankees jersey. Rihanna: 1, Gaga: 0. Other celebs at the Sox-Dodgers games included Tommy Lasorda, Roger Clemens, and Dodgers announcer Vin Scully, who usually stays on the West Coast. The weekend also saw Rihanna partying with friends at the Ocean Club, Sox co-owner John Henry and his wife, Linda Pizzuti Henry, dining at Bricco with Dodgers boss Frank McCourt, and Joe Torre enjoying a meal at Davio’s. . . . Pan-Mass Challenge cyclists rode around the warning track before Saturday’s game to celebrate PMC Day at Fenway. Gathering to mark the event were PMC founder Billy Starr and wives Tiffany Ortiz, Jacque Francona, Stacey Lucchino, and Sue Farrell, who will be participating in the Pan-Mass Challenge in August.

It was boy band heaven at Madison Square Garden over the weekend when New Kids on the Block Donnie Wahlberg, Jordan and Jonathan Knight, Joey McIntyre, and Danny Wood were joined onstage by Backstreet Boys Brian Littrell, Nick Carter, A.J. McLean, and Howie Dorough. The Boston-bred Kids and the Orlando-spawned Boys teamed up during the show for a performance of the Boys’ hit, “I Want It That Way.’’

Christopher Muther of the Globe staff contributed. Read the Names blog at www.boston.com/namesblog. Names can be reached at names@globe.com or at 617-929-8253.