Going with green all the way 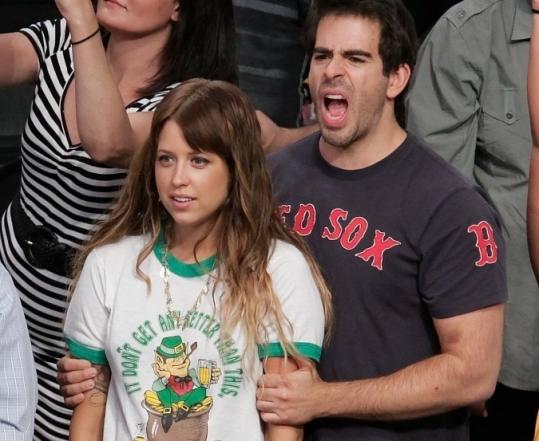 Bring it on. That’s the attitude of Celts stalwarts Maria Menounos and Donnie Wahlberg, who say they aren’t abandoning the green team just because KG and company were crushed by the Lakers in Game 6. Asked whether she’ll be at Staples Center for tonight’s Finals finale, the normally well-mannered Menounos grinned and said, “[expletive], yeah.’’ Menounos, who played hoops at Medford High, has been courtside throughout the C’s improbable playoff run, usually sitting with Arlington-bred comedian Dane Cook. Wahlberg, meanwhile, says he won’t be there. He and his New Kid comrades — Joey McIntyre, Jordan and Jonathan Knight, and Danny Wood — have a show tonight at Radio City Music Hall. “I just want them to win,’’ Donnie told us. “Whether I’m there or not doesn’t matter. It’s about the players and the city of Boston. I got to celebrate with the team in 2008. If I have to miss this time, that’s fine, it’ll be great regardless.’’ . . . What was Newton-bred actor-director Eli Roth’s reaction to his T-shirt making the Associated Press’s game notes the other night? “You know it’s a sad finals game when my T-shirt makes the game notes,’’ Roth said, via Twitter. We’re inclined to agree. Roth attended the game with his girlfriend, Peaches Geldof.

They reign in Spain

Tom Cruise and Cameron Diaz re-created scenes from “Knight and Day’’ on the streets of Seville, Spain, yesterday to promote the made-in-Massachusetts film, which opens next Wednesday.
‘Offspring’ sequel moves to Mass.

Moviemaker Andrew van den Houten confirmed to us yesterday that after being denied government funding to make his horror movie “The Woman’’ in Michigan, he has arranged to film it in Western Massachusetts in August. The film made national news this week after Michigan rejected van den Houten’s request to take advantage of local filmmaking incentives based on the content of “The Woman,’’ a cannibal-themed sequel to the gruesome “Offspring,’’ which van den Houten filmed in Michigan and released last year. Van den Houten told us he has had no problems setting up his shoot in Massachusetts. He added that he’s thankful that Nicholas Paleologos’s Massachusetts Film Office doesn’t consider content when doling out incentives. Van den Houten said it’s dangerous for the government to make choices about what films are worth public funding. After all, what if someone in Boston had deemed “The Departed’’ too violent? “This whole idea of a film commissioner being able to make decisions like that. . . . At what point should the state have input in the content that’s being produced?’’ Van den Houten said he’s pleased he’ll get the chance to make a movie in the Bay State. He went to Emerson College, so he’s familiar with and loyal to the area. “I love Emerson,’’ he told us, proudly. “The Woman’’ will costar Sean Bridges (“Deadwood’’) and “Land of the Lost’’ actress Pollyanna McIntosh.

Boston will face off against Portland, Ore.; Greensburg, Kan.; Austin, Texas; and Salt Lake City for the “Do Something City Award,’’ which will be presented July 19 as part of VH1’s Do Something Awards. Boston was nominated as a do-gooding city for “its commitment to transforming the lives of children through innovative teaching at welcoming schools,’’ according to VH1. You can vote for Boston at www.dosomething.vh1.com. While you’re there, you may want to vote for Matt Damon, who’s nominated against Leonardo DiCaprio, Jessica Biel, Natalie Portman, and Salma Hayek as this year’s Do Something Movie Star. Jane Lynch of “Glee’’ will host the awards show.

manager Terry Francona was all smiles at the Rodman Ride for Kids party the other night, which raised money for at-risk youth. The night included a Q&A with Francona, during which he admitted he knew absolutely nothing about the World Cup. “When the season starts,’’ he admitted, “it’s all over.’’ Francona’s just lucky Sox fans don’t have access to those noisy vuvuzelas. Other guests at the celebration included Glenn Ordway, Paul and Saskia Epstein, Charlie Baker’s wife, Lauren, developer Arthur Winn, and the charity’s chief, Don Rodman (pictured with Francona).

News at the Phoenix

The Boston Phoenix has a new editor. Carly Carioli has taken the helm of the alt-weekly, president Brad Mindich announced yesterday. Carioli, 37, has spent the past four years as the online editor for the Phoenix papers. Lance Gould, who was hired as editor only three years ago, was dismissed in an editorial shakeup, according to executive editor Peter Kadzis.

Fore charity
Actor-activist Michael J. Fox and filmmaker Bobby Farrelly (from left) joined Cam Neely and his son Jack for the 17th annual Cam Neely Invitational Golf Tournament at the Charles River Country Club in Newton Monday. The group raised more than $70,000 for the Cam Neely Foundation for Cancer Care.
King for a day
Author Stephen King (center) was the VIP guest at a Maine Democratic Party event at the Boston Park Plaza on Tuesday night. After the event, Sox diehard King went to the Diamondbacks game at Fenway. He posed with Cynthia Wachs and Stuart Meyerson of the Park Plaza Hotel & Towers.
Around town
Sir John Major, former prime minister of the UK, was seen chowing down at Lala Rokh on Beacon Hill the other night. . . . Backstreet Boys Nick Carter and Howie Dorough partied at Mohegan Sun’s Ultra 88 lounge Tuesday night. . . . Boston Bruin David Krejci was spotted getting a manicure during his Tuesday visit with patients at the Dana-Farber Cancer Institute’s Jimmy Fund Clinic. His manicurist was 4 1/2-year-old Avalanna Routh, of Merrimac (pictured above). . . . Andy Samberg of “Saturday Night Live’’ was spotted at the Sox game last night.