They know (and love) Jack 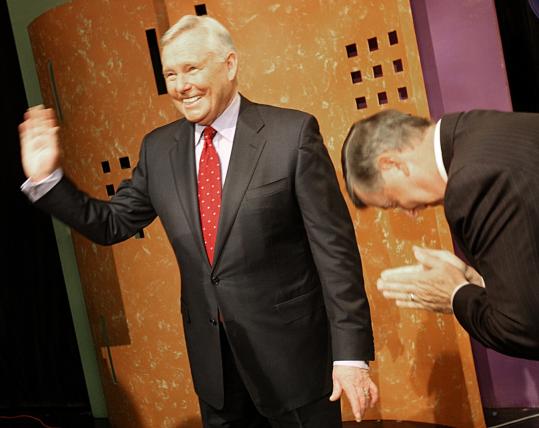 Papi connects for a cause

His on-the-field struggles aren’t affecting David Ortiz’s good work away from the game. The DH sat down with Fox 25’s Kim Carrigan for a banana flan at Big Papi’s Grill in Framingham as part of Boston Bakes for Breast Cancer. About 150 eateries throughout Massachusetts are serving special desserts this week, with 100 percent of sales benefiting breast cancer research and care at Dana-Farber Cancer Institute. . . . Meanwhile, Pats lineman Vince Wilfork and his wife, Bianca, joined RE/MAX of New England VP Jay Hummer to visit patients at Children’s Hospital Boston this morning.

Day's a beauty for little sisters

Boston Breaker Jenny Nobis and a few pretty faces from Big Brothers Big Sisters of Massachusetts Bay got a little prettier during a day of beauty at Stilisti Salon on Newbury Street. The big and little sisters received complimentary braids, manicures and face painting.

Harris, others join in Parker tribute
We’re told actor Ed Harris is coming to town Monday for the memorial tribute to the late, great Robert B. Parker. Harris and Parker became pals while working on “Appaloosa,’’ the western based on one of Parker’s books. (Harris directed and starred in the 2008 film, which also included Viggo Mortensen and Renée Zellweger.) Monday’s event is being hosted by BU’s Howard Gotlieb Archival Research Center, and the speakers will include writers Calvin Trillin, Sue Grafton, and Dennis Lehane.

Made in the shades
Everett’s own Ellen Pompeo was out and about in New York’s West Village this week with her daughter, Stella Luna. Looks like the ‘‘Grey’s Anatomy’’ actress was playing a little dress-up before leaving the house.

Sound advice
Everett’s own Ellen Pompeo was out and about in New York’s West Village this week with her daughter, Stella Luna. Looks like the “Grey’s Anatomy’’ actress was playing a little dress-up before leaving the house.

It’s an understatement to say Leon Huff is looking forward to this weekend, when he and his partner Kenneth Gamble will receive doctor of music degrees at Berklee College of Music. “I’m on cloud nine,’’ says Huff, one half of Gamble & Huff, architects of the famous “Sound of Philadelphia.’’ In their heyday, the pair wrote, recorded, or otherwise collaborated with the likes of Michael Jackson, Elton John, Aretha Franklin, Dusty Springfield, Lou Rawls, Teddy Pendergrass, Patti LaBelle, Harold Melvin and the Blue Notes, and Wilson Pickett, among many others. Huff didn’t spend a lot of time in school, but he wouldn’t advise Berklee kids to follow his lead. “I was born in a house, not in a hospital, and there was an upright piano just sitting there waiting for me,’’ he said. “My path is special to me, but a school like Berklee can really prepare you.’’ Asked if he ever made a perfect record, Huff sighed. “Probably ‘For the Love of Money’ by the O’Jays,’’ he said. “I was looking at the Kentucky Derby on TV and they played it, and later that night, Floyd Mayweather walked into the ring against Shane Mosley and it was playing.’’ Is that good for his bank account? “I don’t know,’’ he said. “But it put a smile on my face.’’

Around town
Geez, there are 81 games at Fenway, and someone had to choose last night to be UMass Night at the ballpark? What with all the hoopla surrounding Nomar Garciaparra, few folks even noticed that outgoing UMass president Jack Wilson also threw out a first pitch. . . . NESN’s sidelined sideline reporter Heidi Watney is getting mostly sympathy from Sox players as she recovers from a concussion. (The cause of the head injury has never been explained.) But appearing yesterday on WZLX’s “Karlson & McKenzie’’ show, Watney said a few players kid her about the concussion, including pitcher Manny Delcarmen, who teased her by singing “If I Only Had a Brain’’ from “The Wizard of Oz.’’. . . ABC’s medical maven Tim Johnson was in town the other night to emcee a health care reform event sponsored by the New England Healthcare Institute.

Food fest in Foxborough
What do Paula Deen, “Top Chef’’ judge Tom Colicchio, Bar-B-Que couple Pat and Gina Neely, and “Ace Of Cakes’’ star Duff Goldman have in common? We’re told they’ll all be at Gillette Stadium June 26 for a food and music fest that will also include Buckwheat Zydeco, “American Idol’’ finalist Melinda Dolittle, and Southside Johnny and the Asbury Jukes.