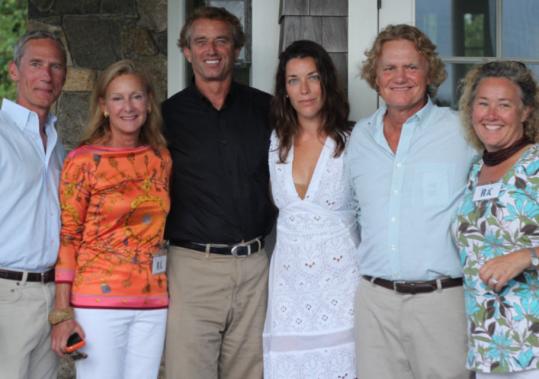 VINEYARD HAVEN - Ah, nothing says gridlock quite like a presidential visit to Martha’s Vineyard during the dog days of August.

Even if the first family lies low on the Rock, their presence here is impossible to miss. The island is accustomed to celebrities, of course, but this is something else: Yesterday’s early-morning ferry from Woods Hole was escorted by a US Coast Guard boat with a semi-automatic rifle mounted on the front. Relaxing, indeed.

It’d be interesting to know if President Obama slept well on his first night bunking at Blue Heron Farm because his neighbors surely did not. We’re told the air space over the bucolic 28-acre estate in Chilmark was buzzing with helicopters dispatched to keep a close eye on the commander in chief.

“Where he’s staying is magic land,’’ said Susan Goldstein, owner of the Mansion House in Vineyard Haven. “It’s a perfect place for children - exactly what an island is supposed to look like.’’

If Beyoncé’s here, we didn’t see her, but Joanna Simon, companion of dearly departed newsman Walter Cronkite, is on the island, staying with kid sister Carly, herself a longtime Rock resident and owner of the Vineyard Haven boutique Midnight Farm.

“People see Carly Simon all the time,’’ said an island business owner. “She’s, like, 10-feet-tall and humming. You notice that.’’ (Almost as much as the 4-foot-long, bright green iguana named “Saint Patrick’’ that was sitting on a man’s shoulder outside Trader Fred’s in Vineyard Haven.)

The filmmaking Farrelly brothers are also here, though on a working vacation of sorts. Word is Peter and Bobby have pushed back the movie version of “The Three Stooges’’ and are instead putting the finishing touches on the script for “Hall Pass,’’ their long-gestating comedy about a married man who’s allowed to have an affair.

Parties on the island so far have included a fund-raiser for the Robert F. Kennedy Memorial Leadership Council that drew members of the Kennedy family and about 75 of their friends to the West Tisbury home of Evercore CEO Ralph Schlosstein. Guests, who heard a talk from Larry Summers about the economy, included Ethel, Robert Jr., and Kerry Kennedy, John and Karen Klopp, Beach Plum Inn owners and environmentalists Sarah and Robert Nixon, Liman, former Rolling Stone publisher Joe Armstrong, actress Gloria Reuben, Carly and Joanna Simon, and Art Buchwald’s daughter-in-law Tamara.

Lively time
“Gossip Girl’’ star Blake Lively made an appearance in Boston over the weekend. The actress was spotted near Fenway Park and in Chelsea for pre-production for the movie “The Town.’’ Lively will play the sister of a member of Ben Affleck’s gang of bank robbers.
Tough time in town
“Days of Our Lives’’ actress Nadia Bjorlin had a rough time of it in Boston over the weekend. The Newport, R.I., native, who was in town with some costars for a Juvenile Diabetes Research Foundation fund-raiser, told us yesterday that her visit to the Hub started with a car accident that almost caused her some serious harm. “We went flying,’’ she said, adding that had it not been for a castmate who held her back, she might have been window-bound. For the record, Bjorlin was not driving (the cast was driven around in a town car). The accident happened on Bjorlin’s way to Fenway Park, where she had been booked Friday to sing the national anthem before the Red Sox-Yankees game. Shortly after she started the song, Bjorlin messed up the lyrics, causing some fans to boo. She blames the sound delay. “I made the mistake of listening to myself. Then my mind went blank,’’ she said. In the end, Bjorlin recovered the performance and fans cheered her on as she finished “The Star-Spangled Banner.’’ Bjorlin said her hosts in Boston asked her to return again. “I said, ‘for a re-do?’ ’’
Disco lives!
Local dancer Jeannette Neill knows how to hustle. That’s why she was called to the Huntington Avenue YMCA at the last minute over the weekend to help extras in Adam Sandler’s movie “Grown Ups’’ learn how to do the Hustle for a 1970s flashback scene. Neill said she spent the better part of a hot day teaching extras the steps so they could break out in a seemingly spontaneous routine. “I have a new respect for extras,’’ said Neill, who has run a dance studio near North Station for 30 years. “It was so hot. Sweltering heat and movie lights. Nobody complained in their polyester.’’ Neill said the scene didn’t include any of the film’s big stars (the “Grown Ups’’ cast includes Salma Hayek, Maya Rudolph, Kevin James, and Chris Rock), but that Sandler stayed on set all day to help director Dennis Dugan. Neill also said that Kate Hudson stopped by to watch the “Grown Ups’’ filming and to chat with her Hollywood friends. Hudson, of course, was in town with her Yankee boyfriend Alex Rodriguez. Apparently, she asked to watch some of the game on one of the YMCA’s televisions.
Facebook - on film?
A number of Hollywood blogs - including EndOfShow.com - reported yesterday that “The Social Network,’’ the movie based on writer Ben Mezrich’s Facebook saga “The Accidental Billionaires’’ - has been given a green light by Columbia Pictures. Filming will begin this fall, say the blogs, which means (if they film locally) even more stars could be coming to town. Not surprisingly, many websites are already guessing who might be cast as Facebook creators/Harvard students Mark Zuckerberg and Eduardo Saverin. Alex Wagner, a blogger with FilmShaft.com wrote yesterday, “Could this be a project for two unknowns or is the prospect of a Zac Efron/Robert Pattinson pairing be a bit too tempting?’’ That sounds like pretty ridiculous casting to us, but we have no problem if Efron and Pattinson come to Cambridge to film later this year. Aaron Sorkin is adapting Mezrich’s book for the screen, and David Fincher is rumored to be directing. Like “21,’’ the film adaptation of Mezrich’s book “Bringing Down the House,’’ “The Social Network’’ is being coproduced by Kevin Spacey.
A hunger to help
Sox guys Mike Lowell, Josh Beckett, Dustin Pedroia, and Jonathan Papelbon were at Fenway Park yesterday afternoon modeling their new “Hit for Hunger’’ shirts on behalf of Labels Are for Jars, which raises money for the Cor Unum Meal Center in Lawrence. David Ortiz was supposed to model a shirt as well, but apparently he didn’t feel like coming out of the clubhouse. (Not surprisingly, Big Papi and friends weren’t in great moods yesterday.) Lowell (right) makes an appearance on behalf of Labels Are for Jars at 12:30 p.m. on Saturday at Newbury Comics on Newbury Street.