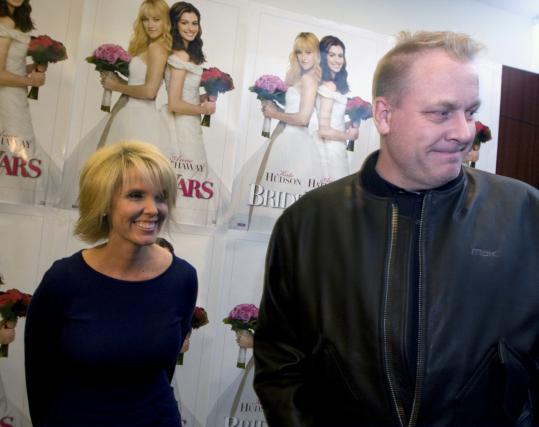 Shonda Schilling, who makes a cameo in "Bride Wars," got a sneak peek at Kate Hudson's new pic last night at Foxboro's Showcase Cinema. (Curt's wife is an extra in a bridal shower scene.) In all, some 250 extras, family, and friends, including Boston casting director Jodi Purdy-Quinlan, attended last night's private screening. If Kate's love interest in the movie looks a little like Tom Brady, that's by design. At the New York premiere of the made-in-Massachusetts movie, actor Steve Howey hinted that Hudson's sweet on the signal-caller. Howey, who looks a little like No. 12, told the Daily News: "Kate actually wanted me to look like Tom Brady in the movie, and I was like, 'Good luck!' " The movie, which opens tomorrow, was filmed in Boston last spring. Because the bachelorette party was shot at The Estate, owners Ed and Joe Kane are offering free admission this weekend to anyone with a "Bride Wars" ticket stub. (And, no, you don't have to enjoy the film to get in.)

Dial it down
A Cambridge man is in big trouble after allegedly making a series of obscene and threatening phone calls to WEEI morning hosts John Dennis and Gerry Callahan. Fifty-seven-year-old David Banner was charged in Brighton Municipal Court this week with two counts of criminal harassment, two counts of threats to commit a crime, and a single count of making annoying phone calls. (His certainly weren't the first - or last - annoying calls to the station.) Banner was released on $1,000 cash bail and ordered by Judge David Donnelly not to call any Boston radio stations. "If someone finds a radio show that upsetting, the appropriate response is to change the channel," said District Attorney Daniel Conley. Banner allegedly made the four calls in October and November. None were broadcast. In an Oct. 29 call, Banner allegedly threatened to kick an 'EEI employee in the teeth. In a Nov. 4 call, he allegedly told a station employee, "Die, you son of a [expletive]." In yet another Nov. 4 call, he allegedly said, "That would be my wish for you to [expletive] die."
Elvis every which way
Our favorite Elvis impersonator, Steve Connolly, will be in town this week from Vegas (where else?) to celebrate the King's 74th birthday. Connolly, of Winchester, will play a free preview show in the lobby of the Cutler Majestic Theatre today, and will perform his full "Spirit of the King" revue at the theater Saturday. Connolly (inset) said when he started in Vegas 10 years ago, he pioneered the " '50s sock hop" Elvis, while everyone else was doing '70s jumpsuit Elvis. "I actually had someone say 'You'll never make it as a '50s sock hop Elvis,' " he remembered. "He said 'If you don't get a jumpsuit you're never gonna make it.' " Now, he said, he does all manifestations of Elvis. "I'll come out in the '50s, probably wearing the gold. Then I'll do the '68 comeback special in black leather. And the ending is '70s Elvis."
Taylors turn to film
His songs have appeared in everything from "Badlands" to "Beverly Hills 90210," but James Taylor's about to take a turn in front of the camera. Word from the West Coast is that Sweet Baby James and wife Kim will film cameos this week in director Judd Apatow's "Funny People." Taylor plays himself in a scene with Adam Sandler and Seth Rogen and his wife is a backup singer.

Late night driving
Local headbangers Bang Camaro took over Conan O'Brien's set Tuesday night, rocking out on "Revolution," a track from their upcoming album, "Bang Camaro II." And they apparently made quite an impression; Conan closed the show with the observation that his house band needs a few more members to make it "The Max Weinberg 18."

New news director
John Verrilli will take over the news directing duties at WBZ-TV and TV38 next month, replacing outgoing news director Jeff Kiernan, who's off to helm another CBS-owned station in Chicago. Station GM Ed Piette announced yesterday that Verrilli will start on Feb. 2. The Emmy-winning broadcast journalist worked previously in Pittsburgh and New York.

Surviving reality TV
We're not surprised Bob Crowley is the toast of Maine for winning $1 million on "Survivor: Gabon." The bow-tied physics teacher (inset) had a day named for him in his hometown of South Portland, and has even received congrats from Governor John Baldacci, according to the Associated Press. But the real shocker? After besting 17 other castaways to become the oldest "Survivor" winner ever, the 57-year-old tough guy went right back to work at Gorham High School. Now, that's impressive.

One for the books
Mark Wahlberg has been up to some local do-gooding through his charity, The Mark Wahlberg Youth Foundation. Brother Jimmy Wahlberg, who runs the organization, stopped by Chittick Elementary School in Mattapan recently to present Principal Michelle Burnett-Herndon with a $10,000 check for a new school library.

Baby's belated b-day
A snowstorm ruined Glen "Big Baby" Davis's New Year's Eve birthday bash, but the Celtics star will be back in Quincy Market on Jan. 18 to shoot hoops and eat cake with kids. The bash is a fund-raiser for the Pitching in for Kids Foundation, also supported by Sox stars Tim Wakefield and Jason Varitek.

Men like a sharp dresser
Framingham native Chris Evans is flattered that he's a favorite of gay men. "I was well aware of that," the "Fantastic Four" actor says in the new issue of The Advocate. Evans, who briefly dated Gisele Bundchen, said he hoped to land a role in Gus Van Sant's "Milk," but it was not to be: "I really wanted to be a part of 'Milk,' but I lost out to James Franco. I guess if you've got to lose, he's the guy to lose to." Evans also dishes on his 2004 appearance in Flaunt magazine, in which he bared his impressive physique. "My current publicist would pull her hair out if I did that photo shoot today," he says. "I have no problem taking my shirt off for a role if the part calls for it, but my publicist says, 'When you're promoting yourself, being you, there's a way to keep it as classy as possible. Greasing yourself up and stripping down may not be the best way to do it.' . . . She may have a point."

Get 'em before they're hot
A collection of rookie Red Sox will be signing autographs tomorrow at the team store on Yawkey Way. For a mere $20 donation to the Red Sox Foundation, fans can get the John Hancock of future stars such as Lars Anderson and Daniel Bard. In all, 13 of the team's top prospects are in town for a two-week program designed to prep players for life in the big leagues. In addition to Anderson and Bard, players taking part include Felix Doubront, Kris Johnson, Richie Lentz, Adam Mills, Dustin Richardson, Mark Wagner, Argenis Diaz, Zach Daeges, Josh Reddick, Dewon Day, who was acquired from the White Sox in October, and Wes Littleton, who was acquired from the Rangers in November.

The express lane to comedy
John Lehr, co-creator and star of "10 Items or Less," was in town for a gig at the Improv Asylum yesterday. The comedian's show kicked off its third season on TBS this week with an episode about bowling with frozen turkeys. The show is a loosely scripted improvisational comedy set in an Ohio grocery store. "We have a very detailed outline, but the cast never sees the script, ever," Lehr said. "In a regular sitcom, you have the actors trying to replicate what happened in the writers' room. We're basically filming the writers' room." Lehr, by the way, also plays one of the uptight cavemen in the famously funny Geico commercials.

Martin Finucane of the Globe staff contributed. Names can be reached at names@globe.com or 617-929-8253.