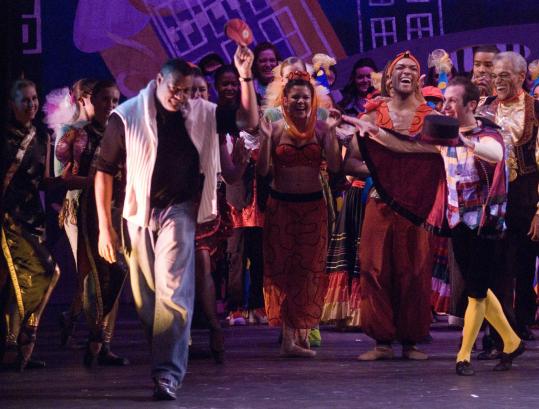 To the surprise of the audience, actor Laurence Fishburne made an appearance at Saturday's performance of Tony Williams's "Urban Nutcracker" at John Hancock Hall. The "Matrix" man walked onstage during a street scene and mingled with dancers. Fishburne's son Langston, a BU student, is in the cast. At the end of the show, the proud father presented his son with flowers and also signed a few autographs for fans.

Distribution problems are a killer
It could be awhile before Southie gets to see "What Doesn't Kill You," the fine first film by favorite son Brian Goodman. The distribution division of Yari Film Group, which produced the movie starring Mark Ruffalo and Ethan Hawke, has been forced into involuntary bankruptcy. The action, which company CEO Bob Yari attributed to a "perfect storm" of financial factors, casts doubt on the future of "What Doesn't Kill You," which was released Friday in LA and New York. Yari Film Group is also producing "The Governess," which was supposed to start shooting with Jennifer Lopez next month in Boston. Yari said in a statement that his company's distribution and production arms are distinct, and work on "The Governess" is going forward as planned. Goodman, who grew up in South Boston, spent several years trying to make "What Doesn't Kill You," an autobiographical tale of two boyhood friends who become small-time crooks. Well received by critics at the Toronto International Film Festival, the film screened in LA and New York for awards consideration. Goodman did not a return a phone call yesterday.
Keep on tokin'
Cheech Marin, one half of the pot-loving pair Cheech & Chong, stopped by WGBH last week to chat with "One-on-One" host Maria Hinojosa (inset). The "Up in Smoke" star also dropped us a dime to talk about - what else? - weed. Marin said he's a big fan of the state's new law decriminalizing possession of an ounce or less of marijuana. "It's amazing," said Marin, who confessed he'd just finished a bag of "Willie weed," herb given to him by singer Willie Nelson. "I just think Massachusetts could be the embryonic region for growth of that movement. It started with the tea party; it's just a different kind of tea. Massachusetts will always be revolutionary and evolutionary. I hope it will spread. And Cheech and Chong will be the spokesmen." Or tokesmen?
'Bunker Hill' day
New Kid Donnie Wahlberg, in town shooting a TV pilot, showed up at Sonsie with a few friends and also dined at the Union Oyster House with a lady friend. Called "Bunker Hill," the pilot for TNT filmed a scene at Joe Milano's landmark restaurant earlier in the week. Wahlberg's costar Bridget Moynahan wasted no time getting to work. Tom Brady's ex filmed a scene on Mead Street in Charlestown the other day.
Holiday partying
Kevin Rudolf got his groove on at The Estate, dropping by Ed and Joe Kane's club for Big Entertainment's holiday party. To the delight of the teeming crowd of 20-somethings, Justin Timberlake's former guitarist played his hit "Let It Rock." . . . Maya Goldman, a.k.a. Cindy-Lou Who in "Dr. Seuss' How the Grinch Stole Christmas! The Musical," was at the Mandarin Oriental yesterday to meet kids from the Home for Little Wanderers, and to help the hotel's pastry chef, Nelson Paz, decorate some Grinch-inspired Christmas treats.