Finding love in the air 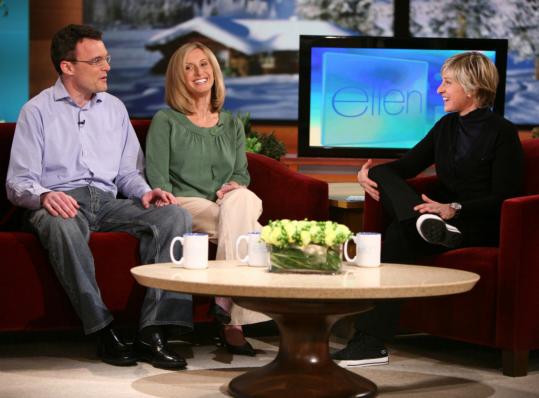 Score one for Craigslist. Brookline's Amy Belastock met Chicago's Dan Poehling after being stuck behind the drink cart on American Airlines Flight No. 1481 last June. The two spent about 35 minutes talking but went their separate ways once the plane landed in Chicago. Neither the 35-year-old Belastock, an administrator at a private elementary school, nor Poehling, 32, who works for an investment firm, were happy with how they left their chance encounter. So their friends and family encouraged them to use the "Missed Connections" section of the Internet site. "I couldn't believe it when I looked online . . . there was his ad," Belastock told us yesterday. That led to an online correspondence, then with Poehling coming to Boston for a first date - a Sox game at Fenway. Soon enough, there were discussions about Belastock moving to Chicago, the duo explained on the Ellen DeGeneres show yesterday. Then Poehling decided to use Craigslist one more time - to pop the question. "He was in Boston and asked me to look at a condo listing, and it was his proposal," Belastock told us. No one seems more surprised by how it all turned out than the happy couple. "This is so not like either of us," Belastock said. "We kept waiting for someone in our families to say this is crazy."

A sex scandal overseas
Hong Kong actor and pop icon Edison Chen is at the center of a media maelstrom that's being called China's biggest Internet sex scandal. Meanwhile, the 27-year-old star may be holed up in Boston, Forbes.com reported yesterday. The scandal erupted a few weeks ago when more than 1,000 sexually explicit images of Chen with some of Hong Kong's best-known starlets were swiped from his computer when he took it to a shop for repairs. According to reports, Chen's photos show him with eight well-known women, including Maggie Q, Bobo Chan, and Cecelia Cheung and Gillian Chung of the pop duo the Twins. Perhaps best known to American audiences as a star of "Infernal Affairs," which Martin Scorsese remade here as "The Departed," Chen reportedly has a girlfriend who attends college in Boston. Chen's US representatives did not return calls yesterday. Considered one of Hong Kong's most likable and bankable stars before this controversy, Chen risks more than embarrassment. In addition to his thriving movie career, Chen has endorsement deals with Samsung Electronics, Pepsi, and Levi's, according to Forbes.com.
It's working out for Hasselbeck
If "The View" cohost Elisabeth Hasselbeck could spend her day in the gym, she'd be happy. "I've been working out like a crazy woman," said the BC alum, who gave birth to son Taylor Thomas 3 months ago. Even though Taylor and his big sis, Grace, keep mom busy, Hasselbeck told People magazine she never tires of workouts. "That's my vacation," said Hasselbeck, who's married to Arizona Cardinals QB Tim Hasselbeck (both at right). "That's the only time I get to myself. [My personal trainer] is like, you get to run six miles today. I'm like, thank you!"
On the scene at the Oscars
Student reporters from Emerson College, visiting LA to cover Sunday's Oscars, scored interviews yesterday that might make some pros jealous. First up was Emerson alum Henry Winkler, a governor of the Academy of Motion Picture Arts and Sciences - the group that doles out the Oscars. Later, they got time with Oscar broadcast producer Gil Cates. ("Friends" creator and Emerson alum Kevin Bright helped line that one up.) The student journalists on hand include Andy Laub, Gabi Conti, Kyle Joyce, Madeira Ginley, Hallie Anoff, and Andrew Nicholson. "[Cates] gave us 15 minutes and a lot of access," Laub told us, "but he wouldn't tell us about any of the surprises."
Boston Ballet to tour
Following on a six-week tour of Spain last summer and appearances in New York and California, Boston Ballet is hitting the road again. In May, the company will perform as part of the Spoleto Festival USA in Charleston, S.C., and, in June, as part of the Kennedy Center's Ballet Across America series in Washington, D.C. "Touring is essential to the growth and advancement of the company," artistic director Mikko Nissinen said in a statement. Among the pieces the company will perform is "Brake The Eyes," a 2006 commission by Boston Ballet's resident choreographer, Jorma Elo.
Natalie's successors
The announcement is only a formality: Heather Unruh and Liz Brunner will both succeed Natalie Jacobson at Channel 5. Since Jacobson signed off last July after 35 years at WCVB, Unruh and Brunner have been rotating in and out of the 6 p.m. weekday newscast. Now, they'll divide up duties, with Brunner taking the bulk of the 6 p.m. slots and Unruh taking most of the 11 p.m. newscasts. The new anchor assignments come after WCVB lost a sizable portion of 6 p.m. viewers (down 40,000 from 2006) in the November sweeps period. Unruh and Brunner will team with Ed Harding and Bob Halloran.
A Boston date for duo
Fresh off a Grammy win, Robert Plant and Alison Krauss announced the second leg of a North American tour for their album "Raising Sand," which includes a stop at Boston's Pavilion June 5. Tickets go on sale March 3 at ticketmaster.com.

Joan Anderman and Johnny Diaz of the Globe staff contributed. Names can be reached at names@globe.com or at 617-929-8253.