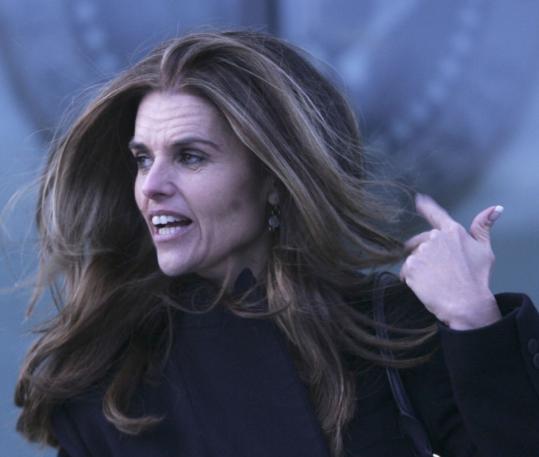 Get Maria Shriver talking about her father Sargent Shriver's service to the country and California's first lady barely stops to breathe. "Daddy's career and his focus was one of service to the country and, yes, even to political aims that advanced that agenda," the proud daughter told us yesterday before introducing "American Idealist," a documentary about her father, who developed federal programs such as the Peace Corps and Head Start. The Bruce Orenstein-directed film was screened at the John F. Kennedy Library and Museum before a packed house including several who worked with the elder Shriver over the years, such as William Josephson and Edgar May, and those who were inspired by his example, such as Be The Change founder and CEO Alan Khazei and City Year cofounder and CEO Michael Brown. Several years in the making, the documentary is now getting its release thanks to a push from PBS that will air "American Idealist" on Martin Luther King Day, something that makes Maria Shriver happy. "That's a holiday of service and I can't think of a better day for it to be shown," she said, noting that the film has screened at the Johnson presidential library in Texas and there are plans to show it at all of the presidential libraries. (Maria Shriver was at the JFK Library about a month ago with her brothers to honor their mother, Eunice Kennedy Shriver, who became ill and spent several weeks at Massachusetts General Hospital. "This is my first trip to Boston that doesn't involve a stop at the hospital," Maria Shriver said.) Shriver said she hopes that when people see the film they will walk away learning more about their history. "Bruce found new footage and there are stories that haven't been told," she said. "I hope young people see it; that would make my family happy."

Longwood Events poobah Jim Apteker knows that his first brush with tailgating - the New England Patriots playoff game at Gillette Stadium on Saturday night - was a special one. That's because fellow restaurateur Steve DiFillippo brought along several from his Davio's crew to make good on an auction item promised to auto dealer turned philanthropist Don Rodman. "I've never done tailgating - it was like having a four-star restaurant making a four-course meal right in the parking lot," Apteker told us of the posh picnic. Meanwhile, inside the stadium before the game, Donald Trump and his wife, Melania, were getting as much face time as their hosts - Patriots owner Robert Kraft and his wife, Myra. ("The Apprentice" mogul even gave a hug to Pats coach Bill Belichick before the game.) As Rockport songstress Paula Cole, sporting a Richard Seymour jersey, sang the national anthem, a gaggle of local notables filed into the luxe suites including Mayor Tom Menino, who stopped by the Reebok box where Paul Foster hosted Celtics president Rich Gotham. Also spotted at the game were state sports and entertainment honcho Rich Krezwick, Sovereign Bank's Joe Campanelli, rock 'n' roll car magnate Ernie Boch Jr., who hosted Godsmack's Sully Erna, and biggies Anne Finucane and Robert Gallery along with chairman emeritus Chad Gifford, whose box is ground zero for Patriots QB Tom Brady's parents Tom Sr. and Galynn. And speaking of Brady, The Razor was abuzz with reports that his supermodel girlfriend Gisele Bundchen made it back from fashion duties in Brazil in time for the game, but no one we know actually saw her in Foxborough on Saturday night.

Singing the praises of women in leadership

Grammy Award-winning singer Gloria Estefan will deliver the closing keynote address and paleoanthropologist Louise Leakey, best-selling author and former Clicquot CEO Mireille Guiliano, and NBC News medical editor Dr. Nancy Snyderman will speak at the Simmons School of Management's annual leadership conference. Planned for May at the Seaport World Trade Center, the daylong gathering will pay tribute to the late Pakistani leader Benazir Bhutto, who delivered the keynote in 1998 and 2005 to standing ovations, for her leadership and personal courage.

Word is that Oscar-winning actor Forest Whitaker and his Boston-bred wife, Keisha, will be in town on Feb. 1 for Boston Common magazine's party to mark the release of its latest edition - the one with Forest on the cover. The glossy publication is known for getting its cover subjects, including Red Sox slugger David Ortiz, "Bones" star Emily Deschanel, and "Rescue Me" creator Denis Leary, to attend their parties. . . . And reality TV darling Brody Jenner is coming to Boston to host an event at The Estate on Jan. 26. Son of the former Olympic champ Bruce Jenner, Brody has been featured on several shows including "The Hills," "Princes of Malibu," and "Keeping Up With the Kardashians." The latter features his stepsister Kim Kardashian.

A three-night stay at Canyon Ranch in Lenox valued at nearly $3,000 is among the items to treat the body and soul that Martha Stewart is giving away to her audience for the show that's slated to air today. Not to be outdone by Oprah Winfrey's favorite things or Ellen DeGeneres's "12 Days of Christmas," Stewart has enlisted former Surgeon General Dr. Richard Carmona in doling out the items to her studio audience, all of whom are subscribers to Body + Soul magazine. In addition to the all-inclusive stay at the swanky Berkshire getaway, the audience members also scored a queen-size BellaSonna Tempur-Pedic bed that's worth nearly $4,500.