A star in the classroom 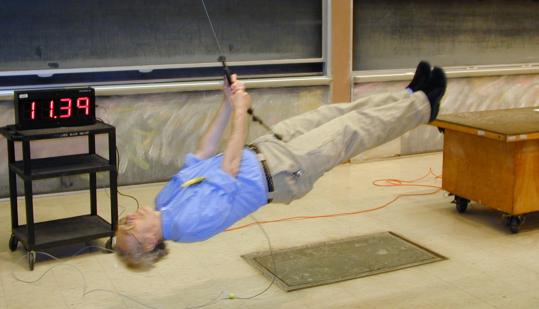 Who says nobody reads newspapers anymore? MIT physics professor Walter H.G. Lewin is mulling countless book and TV offers after being featured on the front page of The . Lewin said yesterday he's been contacted by no fewer than 12 publishers, numerous literary agents, and the schedulers for nearly all of the late-night talk shows in recent days. The sudden attention, while gratifying, has been a bit bewildering for the 71-year-old scholar. "If I am very honest with you, I have never heard of a single one of these shows," said Lewin, who's been approached by the bookers for David Letterman, Jay Leno, Conan O'Brien, and Stephen Colbert, among others. "That tells you how much of an ivory tower I must live in. . . . The famous 'Ellen DeGeneres Show' contacted me, and I don't even know who that is." Even before Sara Rimer of the Times profiled the professor on Dec. 19, Lewin was something of an Internet celebrity thanks to his series of eminently entertaining lectures available free through iTunes U and MIT's OpenCourseWare. As many as 10,000 people a day watch Lewin's lectures, which are always enlightening and rarely boring. (For example, to demonstrate how a rocket takes off, he rides a tricycle propelled by a fire extinguisher across his classroom.) Lewin said he is likely to write a book, but he's undecided about appearing on TV. (On hiatus since November due to the writers' strike, Leno, Letterman, O'Brien, Jimmy Kimmel, and Craig Ferguson all return to the air tonight.) "My reputation is based on being an unusual and very effective teacher. That's my legacy," said Lewin. "It's not clear that these shows will do justice to what I'm good at. I don't want to be seen as a magician or a clown, but as someone who is a successful lecturer. Being funny for the sake of being funny does not interest me."

From prison to prime time
So how did "60 Minutes" correspondent Steve Kroft land an interview with notorious former Winter Hill Gang hit man John Martorano? Turns out that Martorano played football with late "60 Minutes" interviewer Ed Bradley back when the two were high school students at Mount Saint Charles Academy in Rhode Island. Martorano's lawyer started the negotiations for the interview with the CBS newsmagazine about five years ago and came to a deal with Bradley before his death in late 2006. But Martorano was still in prison after pleading guilty in 1999 to killing 10 people and other charges including racketeering, extortion, and money-laundering. "I never thought I'd be sitting here with you, I thought I'd be here with Ed," Martorano tells Kroft in the interview that airs on Sunday. "But I'm sitting here because Ed wanted me to sit here and I'm honoring that." (The duo also walked around Boston and Somerville and made a stop at Ciao Bella restaurant on Newbury Street.) While Kroft and Martorano are on the field at the Catholic school in Woonsocket, R.I., Kroft shows the former mob hit man a photo of his gridiron squad and asks: "That's you?" And Martorano points to himself saying: "Oh yeah, yeah, that's me. That's it. That's me." But then Martorano shows his softer side and points out Bradley, who blocked for Martorano some 50 years ago. "That's Ed. That's Big Ed. That's what I called him, Big Ed."
Emeril smells the Roses
As grand marshal of the 2008 Pasadena Tournament of Roses Parade, Emeril Lagasse waves to the tens of thousands along the route yesterday morning. A Fall River native, Lagasse and his trademark "Bam!" have been on the Food Network for 10 years. Southern Cal played Illinois in the Rose Bowl.
Shriver remembered
California first lady Maria Shriver will return to the John F. Kennedy Library and Museum on Jan. 13 to host a screening of "American Idealist," a documentary about her father, Sargent Shriver, who started several federal programs including Head Start and the Peace Corps. After the screening, there will be a discussion with William Josephson and Edgar May, who are both friends of Shriver, the film's director Bruce Orenstein, and Shriver biographer Scott Stossel. The screening comes just about two months after Mrs. Arnold Schwarzenegger and her brothers honored their mother, Eunice Kennedy Shriver, at the JFK Library gathering that included her siblings, Senator Ted Kennedy and Jean Kennedy Smith. . . . And on Jan. 14, former secretary of state Madeleine Albright will be at the JFK Library to talk about her new book "Memo to the President Elect: How We Can Restore America's Reputation and Leadership" with Harvard prof Joseph Nye.
Home again?
Donnie Wahlberg could be back working on a film in Boston by late spring. Wahlberg, who just finished filming Southie native Brian Goodman's "Real Men Cry" in Boston, is in final talks to direct "The Fallen," a drama based on the life of Michael Yebba, a former Boston firefighter who battled a drug addiction. And it looks like Wahlberg is taking a page from Ben Affleck's book in making his directorial debut with "Gone Baby Gone," which stars his brother Casey. If Wahlberg takes on the project he'll be directing his brother Bob Wahlberg in the lead role. (Their brother Jim is also listed as one of the film's producers.) "Depending upon what happens with the writers' strike, we could be starting by late spring," Yebba told us yesterday. "We expect to film it all here in Boston." Yebba - who's had roles in "Real Men Cry," "21," and "My Best Friend's Girl" - penned the script with Boston writer Emilio Mauro, but it started out as something quite different for Yebba. "This was kind of like a journal for me," he said. "Then it became something else."