How Johnny will read

New technologies, coupled with better understanding of how we do it, will make us faster and more efficient 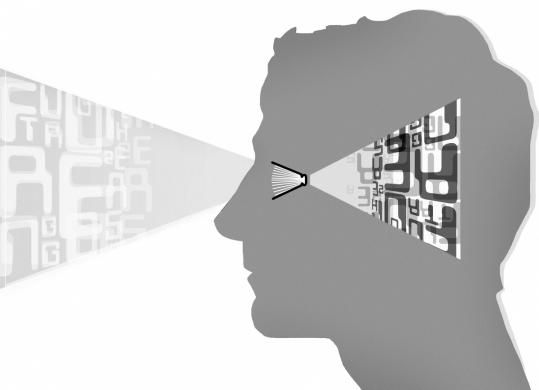 This essay is the last in a three-part series about reading. Part one focused on the history of reading, and part two looked at current readers in transition between the page and the screen.

When I finally relented and ordered a Kindle a few months ago, I thought I was stepping into the future of reading. The explosion of the Kindle and similar e-readers appear to be pointing the way toward a time when books are primarily delivered byte-by-byte rather than page-by-page.

But it’s not really much of a revolution, when you think about it. Because for all its sleekness and usefulness, what’s striking about the Kindle is just how low-tech it really is. Its e-ink is designed to mimic printed text; its basic, minimalist interface limits distractions and conjures up a book experience as much as a gadget experience.

In short, the Kindle is weirdly traditional, a layover between our low-tech past and our presumed e-everything future. In the long run, things are going to get more exotic, as researchers working on both gadgets and the underlying cognitive and visual science of reading gain a better understanding of how to improve the experience.

One example is a “paper computer’’ created by the Queens University Human Media Lab in Kingston, Ontario. Researchers there created an interactive flexible display. You could program it, in other words, to switch to the next page in an e-book whenever you pull the top right corner toward you - as though you were flipping a page. Flexible displays will be lighter, more portable, and less fragile than many of the reading devices used today.

And the Queens University researchers are far from the only ones working on this sort of technology. Cambridge’s E-Ink (of Kindle display fame) and , among others, are at work on their own flexible products. Creating e-pages robust enough for consumer applications is challenging, but videos of prototypes are popping up like cat videos on the Internet, and we’re probably just a few years away.

This is still reading as we’ve always known it, however. It’s a bit harder to imagine how current approaches to reading will give way to newer, more collaborative, tech-heavy iterations.

Johanna Drucker, a professor at UCLA’s graduate school of education, has thought a lot about the transition to digital media. “I think we’ll have fewer long-form readers and fewer long-form writers,’’ she says. But all is not lost, because that “doesn’t mean there won’t be sustained unfolding of narratives or tales. I think there will, but I think they’ll take place in different forms and formats.’’

When you combine this idea with the technology just on the horizon, it becomes clear just how rapidly the reading experience might change for the most tech savvy among us. Take the work of Grace Woo, a doctoral student at the MIT Media Lab. (Full disclosure: She is also a Globe technology intern.)

Woo thinks a lot about screens. Most people see them as devices that disconnect us from each other, but in her work, she asks the question, “How can we use screens to facilitate social interaction?’’

It’s an important question, because she predicts screens soon will be ubiquitous. Not the dumb, passive screens we’re used to today, but screens that can send and receive data to and from cellphones, laptops, and other devices. These screens will help form tighter peer-to-peer communication networks, as well - if you’re sitting two doors down from someone and want to send them a message, you won’t have to do so through Internet or cellular infrastructure that takes that message countless miles away before bouncing it back.

This is an interesting evolution in community away from the everyone-in-the-same-place vibe of the Internet - imagine a collaborative reading or storytelling exercise conducted with only the people in the same building or block as you. Or imagine a setup where nearby screens - with your permission, of course - automatically pull in and display the latest page of whatever e-book or article you are reading at the moment, allowing other passersby to leave their comments or commentary. It’s a weird mix of the private and public, one with a whiff of voyeurism to it - in other words, exactly the sort of thing today’s consumers have shown they have a huge appetite for.

But even as we prepare to dive into a sea of e-readers, flex-readers, and Guttenberg knows what else, researchers are still trying to figure out exactly how reading works - that is, the cognitive and perceptual processes that allow us to magically take in words and quickly extract meaning from them.

This has been common knowledge among vision researchers for more than a century. But more recent advances in cognitive science have allowed researchers to explain the reading process in ever-increasing detail, and it’s only now that we’re in a position to answer some fundamental questions about how reading works.

Barbara Juhasz, a psychology professor at Wesleyan University, explained that one of the big debates at the moment is “whether two words can be processed fully during a single fixation in reading.’’

“Some of my own research,’’ she wrote in an e-mail, “has supported the serial view - that what we do when we read is to identify each word one at a time, and once we identify a word our attention shifts to the word to the right . . . However, there is a large body of research supporting the other position - that during each fixation we are processing multiple words at the same time. Hopefully in the next decade this question will be largely resolved.’’ And once it has been, it “will definitely lay the ground for future research on eye movements during reading.’’

Another area researchers are honing in on is crowding - our difficulty making out objects in our peripheral vision that are close to other objects. Since even though we’re only fixating on one small bit of text at a time, we’re also perceiving text around it, crowding becomes a factor that can slow down the rate at which we read.

“A lot of people believe that crowding is a limitation on reading,’’ says Susana Chung, a professor of optometry and vision science at the University of California, Berkeley.

Denis Pelli, who studies reading at New York University, agrees. His research has shown that crowding is one of the primary factors that “imposes a basic limit on how fast we read.’’

“The thought is that if you could somehow have some kind of training exercise or a change in the way that letters are drawn,’’ says Pelli, “that you could reduce the crowding, perhaps you could increase the size of the window [of text people can comprehend] and proportionally increase the speed of reading. So that’s something we’re working on.’’

Pelli says that there haven’t been any major advances in dealing with crowding, but he’s confident there will be. “We’re doing some things now that we’re excited about,’’ he says, “but we don’t have anything yet.’’

Ways to read faster and more efficiently would obviously benefit everyone, but this work could particularly affect many people with visual impairment. Readers - often aging readers - who suffer from so-called central-field loss have to rely on their peripheral vision to read, and that’s exactly where crowding is a problem. So if Pelli and his colleagues discover new, more accessible ways of presenting text, it could have profound repercussions for anyone who suffers from a variety of visual ailments.

Dealing with crowding isn’t the only way researchers are trying to speed up the efficiency with which people read. One other method researchers are looking into is called Rapid Serial (or Sequential) Visual Presentation, or RSVP. Instead of text being arranged line by line, it is flashed on a screen, one word after another, very quickly. The idea is that this allows for much faster reading without sacrificing comprehension.

“Double your reading speed, wouldn’t that be great?’’ wrote Chuck Bigelow in an e-mail, referring to the claims of some researchers who have studied RSVP. Bigelow is a renowned type designer who won a MacArthur Fellowship in 1982 and currently teaches at the Rochester Institute of Technology. “But, so far, readers don’t seem to like’’ RSVP. Bigelow added that the technique hasn’t been shown to be effective with longer-form reading. And one 2006 dissertation at Uppsala University in Sweden, an evaluation of five studies of reading methods on mobile devices, stated flatly that “[t]he RSVP format did not live up to the expectations’’ (even though it did prove a better method than scrolling down over a long block of text), but hinted at newer, potentially more effective methods currently being developed.

Still, I was intrigued by RSVP. I tried it out by dumping a lengthy New York Times article into a RSVP Web applet I found online, which then blasted the story back to me, one word at a time, at 300 words a minute (most people read at about 250 words per minute or so). The effect was . . . well, strange. I felt a weird tension, almost like eye strain, as my brain and eyes struggled to keep up, but when the article was done I found I had mostly absorbed it (though I probably couldn’t have repeated many of the unfamiliar proper names). On the one hand, I saw why it might be unpopular with readers; on the other, it was clear just how useful it - or something like it - could be given the explosion of small screens that make it hard to comfortably read traditionally presented text. No one likes squinting down at their iPhone, but real estate becomes less of a concern if only one word at a time gets displayed.

We’re at an interesting, uniquely transitional point in reading’s history. Even as we’re buried in tablets and e-readers, we’re reading the same way humans always have. And, to be sure, there’s a chance we’ll always read that way. But given all the work being done on reading - not to mention the limitless commercial applications of devices or methods that can be shown to improve our reading performance or make reading easier for the visually impaired - it’s hard to imagine that breakthroughs aren’t on the way. Tomorrow’s readers may just see my Kindle as a quaint artifact of a simpler, less enlightened time.