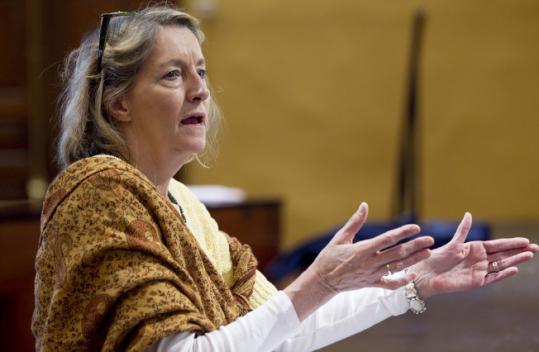 Jeffrey Haddow long dreamed of the project. But it took Needham composer Neal Hampton and the people of Wellesley College to do it full literary — and musical — justice.

“In 2006 Jeff started working on this,’’ said Hampton. “He thought ‘Sense and Sensibility’ could sing.’’

“Sense and Sensibility: The Musical’’? What would Jane Austen think?

Two hundred years have passed since Austen published her novel chronicling the travails of the Dashwoods, two sisters left in reduced circumstances by their father’s death. But Austen’s fans can pass judgment on this new version when the musical opens next week at Diana Chapman Walsh Alumnae Hall on the Wellesley College campus.

Setting Austen’s sardonic phrasing to music — imagine trying to belt out “people always live forever when there is any annuity to be paid them’’ — was no easy task.

But after Haddow wrote the book and lyrics, he met with Hampton, conductor of the Brandeis-Wellesley Orchestra.

“He asked me to join the project,’’ said Hampton.

A couple of workshops were done, as well as a stage reading in Lenox, in 2009.

But setting Austen’s first novel to music clearly remained a work in progress.

“It was in a continued stage of revision,’’ said Hampton. “We added songs and took out songs.’’

“The most difficult part about the music was maintaining a balance for the modern audience, since this is a period piece,’’ said Haddow.

Haddow, a big fan of Austen’s work, decided to blend her book with song when he saw Emma Thompson in the movie version.

“ ‘Sense and Sensibility’ seemed more adaptable to a musical than ‘Pride and Prejudice,’ ’’ he said.

When it came to the songs, Austen’s words were nothing to fool around with.

“We had to have a flavor of the period grounded in contemporary sound,’’ said Hampton.

For example, a duet called “That’s Not Love’’ features the lyrics, “That’s not passion; love is a feast not a ration.’’

So did Nora Hussey, the college’s head of theater. She’s directing the musical, which will open Tuesday and continue through May 1.

Hussey, who usually takes on serious plays or classic adaptations, isn’t daunted by this change of pace. “We did a musical version of ‘The Scarlet Letter,’’’ she said.

For casting, Hussey reached out to college staff members, current students and graduates, even a class dean. For male roles, she cast Boston actors.

“It’s a great group of people to work with,’’ said Hussey.

When Natick resident Karen Wilcox, who is preparing to leave her administrative job at the college, saw the notice for the show, she thought, why not audition?

The Lexington native was Natick High’s musical director for years, and has sung with the New World Chorale.

“It said looking for all ages and types,’’ said Wilcox. “I was retiring and had the time.’’

Of her casting as Mrs. Dashwood, Wilcox said, “What an opportunity. I’m very excited.’’

Chelsea Ennen, a first-year student from Ohio, was active in theater during high school. She also read Jane Austen. And when she found out Hussey would be directing “Sense and Sensibility,’’ she couldn’t resist auditioning. She has the role of Fanny.

Dry has long been active in opera productions and knew Hampton professionally. She also knew of his years of work on the show.

Hampton “asked me, ‘Can we do it at Wellesley?’ ’’ said Dry. “I ran it by Nora. She was thrilled, even though it was brand new and she didn’t know anything about it. We have a strong English department. It’s a good place to do’’ Jane Austen.

Stephanie Kacoyanis, a native of Wenham who lives in Belmont, graduated from Wellesley in 2005.

She said she was inspired to pursue an operatic career by Dry, and welcomed the chance to be in “Sense and Sensibility’’ with her mentor.

“I studied voice with Marion for four years,’’ she said. “I didn’t know anything about opera. She showed me my voice could do something I didn’t think it could.

“When Nora mentioned it I was excited,’’ said Kacoyanis, who will play Lucy Steele. “I like Jane Austen a lot.’’

“There are so many Austen people out there,’’ said Hussey.

For the schedule of performances, visit www.wellesley.edu/Theatre.