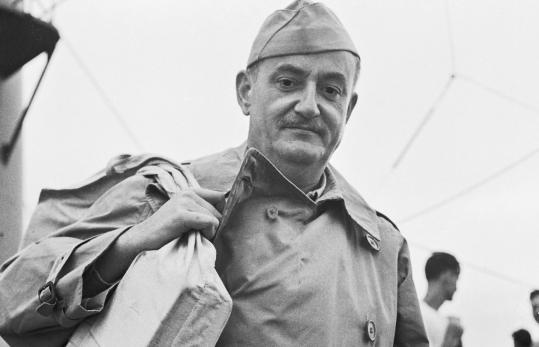 New York Times correspondent Barney Darnton was 44 when he was killed in New Guinea.
By Dan Cryer Globe Correspondent / March 27, 2011

John Darnton never knew his father. Byron “Barney’’ Darnton, a New York Times correspondent, was killed by “friendly fire’’ while covering a US Army amphibious landing on New Guinea during World War II. An American B-25 bomber pilot, unaware that US troops were in the area, assumed he was attacking Japanese ships when he let loose his deadly salvos. Barney was 44, his son just an infant.

John’s mother, Eleanor, known as Tootie, remained single. She raised John and his older brother, Robert, while struggling to hang on to jobs. In lieu of a father, Tootie offered her boys tales of a larger-than-life hero who sacrificed his life in the fight against totalitarianism. Going public, she wrote an upbeat memoir, “The Children Grew,’’ describing her children’s seamless transition to life without father.

The book, it turns out, was as myth-prone as Tootie’s stories.

John Darnton, author of thriller novels and a veteran Times man himself, knew that the memoir was a put-up job. The reality he experienced was far sadder. And since his mother died in 1968, it took all his investigative skills to fill in a portrait of the real Barney Darnton. “Almost a Family’’ is thus two haunting narratives, a sobering account of a fatherless childhood and of the relentless pursuit of evidence about a man he longed to know.

Darnton is clearly more comfortable as clear-eyed observer of these events than as emotional participant. Rarely does he let his guard down. As his story makes clear, this coping mechanism kept him afloat for years.

Tootie, her husband believed as he went to cover the war, was not the sort who “cracks under a bit of difficulty.’’ Thus the brave face in 1943 as she christened the Liberty ship SS Byron Darnton, built to ferry war supplies from Scotland to Russia. Thus the government PR jobs in Washington before joining the Times and being promoted to women’s news editor.

But in a letter that John discovered years later, Tootie admitted to an “unrelieved private desolation.’’ For young John, it wasn’t so much pain he felt as “the presence of an absence.’’

From the Times’ archives, the adult John learned of his mother’s battles to have the paper take women’s news seriously. After quitting in protest, she founded the short-lived Women’s National News Service. As this pioneering effort failed, her personal life nosedived, too. The woman whom the sons continually labeled “groggy’’ was, in fact, a drunk, only belatedly redeemed by Alcoholics Anonymous.

Robert escaped to prep school at Andover (followed several years later by John) and became a Rhodes Scholar and a distinguished scholar of French intellectual history. John, expelled from Andover for a single night of drinking, eventually found his way by following his father’s footsteps to the Times.

Nearing retirement, John set out to make Barney Darnton real, for better or worse. He tracked down distant relatives and professional acquaintances, unearthed letters and documents.

To his surprise, he discovered that his parents had been free spirits who hobnobbed with hard drinking, partner-swapping Jazz Age bohemians. Barney was a witty charmer, a dapper dresser, a womanizer, a restless ego. He was also a first-rate journalist, and a kind and generous man. Both he and Tootie had been previously married, his father twice, facts she had never mentioned. John more or less confirmed her dying revelation that she and Barney never bothered to marry.

However mixed Darnton’s feelings about this parental legacy — in some ways, his adult life seems worlds away from theirs — he clearly writes out of love and respect.

Even after filling in some blank spaces, Darnton admits that he cannot fathom what really motivated his father. If Barney cannot be made wholly real, can he make Barney’s death real?

Thus Darnton’s attempt to interview grizzled war vets, to reconstruct those final hours, to set foot on the very beach where his father died. Of his visit to Papua New Guinea, he writes: “I felt his absence, and I felt as if I were mourning him for the first time.’’ In “Almost a Family,’’ closure arrives cloaked in pain.

Dan Cryer is author of “Being Alive and Having to Die: The Spiritual Odyssey of Forrest Church,’’ to be published by St. Martin’s Press this fall. He can be reached at www.dancryer.org.