THIS STORY HAS BEEN FORMATTED FOR EASY PRINTING
For Children

The good, the great, and the almost 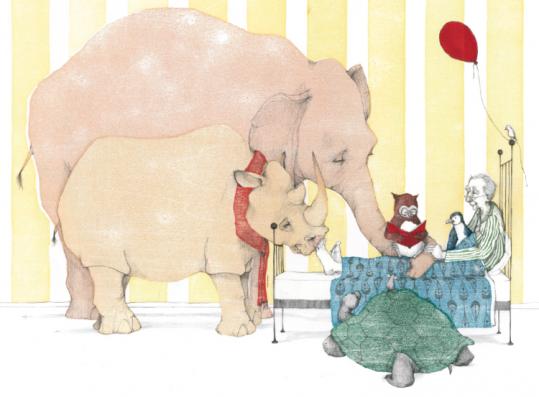 In January the American Library Association announced several important award winners, notably the Caldecott Medal for best picture book; the Newbery Medal for children’s fiction, and the YALSA Award for young-adult nonfiction. As with many prizes, the finalists are sometimes more interesting than the winners, the bridesmaids lovelier than the brides.

I can’t imagine a better pick than Caldecott medalist, “A Sick Day for Amos McGee by Philip C. Stead, with illustrations by Erin Stead, for whom this book marks a stunning debut.

Amos McGee, an elderly zoo keeper, prides himself on keeping a regular schedule. “Every day Amos waited for the number five bus. ‘Next stop, City Zoo,’ the bus driver would call. ‘6 a.m. Right on time,’ ” Amos would reply. He then goes to visit his good friends — he plays chess with the elephant; races against the tortoise; sits with the shy penguin; loans his hanky to the rhino; and reads stories at sunset to an owl who is afraid of the dark.

One day McGee awakens with “the sniffles, and the sneezes, and the chills,” and calls in sick. His animal friends wonder where he could be. They take the number five bus to show their friendship. Philip Stead’s prose is elegantly concise, unafraid of letting the pictures speak. Using woodblock printing and pencil, Erin Stead enters the world of children’s books as if she’s been doing it all her life. McGee is not your generic old man in your generic picture book. He’s sharp as a needle, thin, baggy, bony, expressive, intensely lovable. Erin Stead’s style is realistic, character-driven, reminiscent of great American picture books of the 1940s and 1950s.

Few books are perfect; this one is. It will bear up under many rereadings, thanks to the firm structure of its prose, the visual jokes and surprises throughout.

I wish I were as enthusiastic about YALSA Award winner, “Janis Joplin: Rise Up Singing’’ by Ann Angel. It has potential — a charismatic, complex central figure; triumph and heartbreak; living relations and friends to offer insight. But YALSA finalists Susan Campbell Bartoletti’s “They Called Themselves the KKK: The Birth of an American Terrorist Group,’’ and Paul Janeczko’s “The Dark Game: True Spy Stories’’ are powerful, well-written, in fact, dazzling in comparison.

Joplin was born in 1943 in Port Arthur, Texas, the eldest of three children. Janis was “a bright and pretty little girl in ruffled dresses and blonde curls.” By her teenage years she had bad skin, frizzy hair, divine stubbornness, and a reputation as “loose” and liberal on race relations in a deeply conservative, prejudiced small town. It was the beginning of the end of one kind of life, and the start of legend. Her meteoric rise to fame was rocky, often frightening, always fragile.

But Angel’s rendering is painfully inept. “Oh, how Janis knew the pain of being alone,” she writes. “Man, could she ever sing!” The graphics don’t help. The index is nearly illegible against dark blue paper. Photos, while poignant, are badly reproduced and often undated.

“Janis Joplin’’ will appeal to none of its intended audience — not to lovers of rock ’n’ roll, or rebels, cultural history buffs, outsiders or outcasts. Janis never comes fully alive here. Band member Sam Andrews provides a brief introduction and the most potent prose in the book: “She was the Queen of the Scene and the chambermaid, simultaneously . . . There was electricity in the air when Janis was around, and I will always miss her.’’

I also had difficulty warming up to “Moon Over Manifest,’’ Clare Vanderpool’s Newbery Medal-winning debut novel. Its multiple plot and time lines initially left me bewildered and bored. I suspect some young readers may have the same response. Others, however, may be able to overlook these problems and lose themselves in the story of young Abilene Tucker who feels abandoned when her father sends her off alone to his old hometown, the rundown, dusty Manifest, Kansas. There she works to puzzle out the pieces of her father’s past.

The novel has two distinct narrative paths. One takes place in Abilene’s time, the down-and-out Depression years of the 1930s. The other is set in the 1910s, involving many mysteries, plot twists and turns in a town that needs to be saved from greedy coal mine owners and its own prejudices. Adding to the narrative complexity are scraps of old newspaper articles from the period, letters home from a World War I soldier, and some hilarious old-timey ads for dubious products.

One might think of “Moon Over Manifest’’ as Nancy Drew meets “To Kill a Mockingbird.’’ It’s an almost-great book with a strong voice: “it’s best to get a look at a place before it gets a look at you.’’ “[A] con is the art of distraction.’’ Abilene is likable and brave — a classic red-haired, father-abandoned heroine.

I kept trying to embrace “Moon Over Manifest.’’ It’s a good-hearted book. Vanderpool is clearly gifted and may be capable of true greatness. She knows what it takes and need only follow her own advice: “to write a good story, one must watch and listen.’’

Liz Rosenberg, whose latest picture book is ”Nobody,” teaches English at Binghamton University. Her e-mail address is liz-rosenberg@ymail.com.