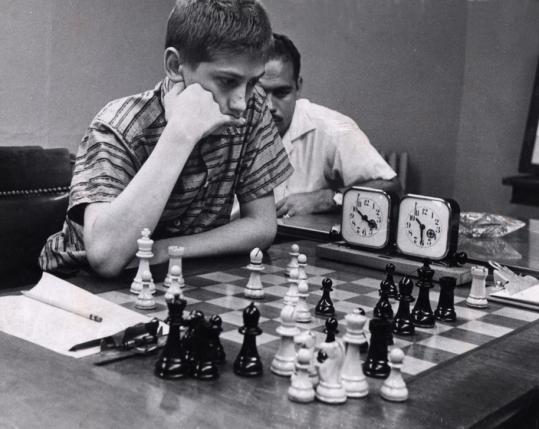 Chess is not the likeliest path to worldwide celebrity, but Bobby Fischer was no ordinary player. The freakishly talented, freakishly flawed Fischer, who defeated the Soviet Union’s Boris Spassky in the 1972 World Chess Championship, one of the great spectacles of the Cold War, played the game as if it was a blood sport. Dick Cavett once asked him in a TV interview “where is the greatest pleasure” in a match, and Fischer responded, with glee, “When you break his ego — this is where it’s at.”

Spassky said of him that “[i]t’s not if you win or lose against Bobby Fischer; it’s if you survive.” Combative and charming by turns, Fischer, for a time, put the cloistered, cerebral world of chess in the spotlight — he even made the cover of Sports Illustrated. But Fischer’s fame curdled into infamy, and in his last years — he died at 64 in 2008 — he was known more for his anti-Semitic ravings and battles with the US government than for his moves on the chessboard.

In “Endgame,’’ Frank Brady, a communications professor at St. John’s University, tells the story of Fischer’s life with dramatic flair and a sense of judiciousness. Fischer could be unruly, pathologically touchy, and repulsively insulting, but he played chess brilliantly. At times, Brady, who knew Fischer and studied his life for decades, cannot quite keep the fiend and genius in balance, however much he fills us with a sense of Fischer’s torments. “Endgame,’’ to its credit, is not written solely with chess aficionados in mind; Brady, a longtime chess hand and founder of Chess Life magazine, explains the technical aspects of the game with an appealing clarity as he tells the story of Fischer’s fame and fall.

Fischer and his sister, Joan, were raised by their doting, caring mother, Regina, a Swiss Jew who came to the United States as a child — the evidence remains unclear as to the identity of Fischer’s father. Fischer came out of Brooklyn with a preternatural gift for chess. By 6, he was beating his 36-year-old mother and 11-year-old sister. Money was a constant struggle. However, Regina, who studied to become a doctor but left school before completing her training, strived hard to provide for her “little chess miracle,” leaving Fischer to the life of a “latchkey child.’’ From early on, Fischer displayed both this trademark social awkwardness and single-minded focus on the game — he would even rehearse chess moves in the tub. “The neurons of Bobby’s brain seemed to absorb the limitations of and possibilities of each piece in any given position,’’ Brady writes, “storing them for future reference.’’

Fischer would draw on these resources as he took the chess world by storm. As a 13-year-old in 1956, Fischer played the so-called Game of the Century against Donald Byrne, a college professor and chess master. Fischer’s tactics shocked the chess world — as he moved in for the kill, he sacrificed his queen, the most powerful piece in a player’s arsenal. The move showed off the kind of daring bravado that would make Fischer famous. Two years later, he would become the youngest international chess grandmaster and was embarked on a run that brought him eight US championships.

Two men moving around pieces on a board may not sound exactly galvanizing, but Brady’s accounts of Fischer’s matches simmer with excitement. And Brady does not shy away from the unpleasant side of Fischer — the anecdotes are too many to count. The chess wiz displayed a lack of self-awareness and uncouth manner that he never quite shed. After winning the Monte Carlo International, for example, he “ungallantly refused to pose for a photograph with His Royal Highness Prince Rainier, the tournament’s sponsor, and at a public ceremony when Princess Grace awarded him his cash prize, he rudely tore open the envelope and counted the money before he thanked her.”

There have been lots of artists who have been scoundrels, and sportsmen who have been thugs, but Fischer’s bad behavior was breathtaking. The same brain that was capable of strategic genius also became a reservoir of hateful and skewed perceptions. He resented the Soviet domination of the game and made it his mission to win the world title.

The match with Spassky almost never went off. Fischer fussed and dithered, delaying the start of the competition, which took place in Reykjavik, Iceland. “[I]t was about Bobby getting his way,” observes Brady. He quibbled over the parameters of the match and the payout. Fischer never liked the press, and newspaper and magazines responded in kind. The Daily Mail sneered, “Bobby Fischer is quite certainly the most ill-mannered, temperamental and neurotic brat ever to be reared in Brooklyn. As far as the international prestige battle goes, the Soviet Union has won the opening round 10 to 0.” A lot was forgiven when Fischer put on one of the greatest feats of showmanship in chess history, losing the first games before staging a comeback and defeating Spassky.

After his victory, Fischer began an odd retreat. He feuded with the World Chess Federation and lashed out at rivals — perceived and actual. His views grew more and more angry and perverse: “Everyone who is a Soviet, and everyone who is Jewish, cannot be trusted.” In 1992, he played a rematch with Spassky in Yugoslavia, which brought more controversy — the Yugoslav wars were raging and US sanctions had been imposed, which Fischer flouted. He denounced the American government for indicting and persecuting him. He rejected his US citizenship, eventually finding refuge in Iceland. He had returned to the place of his greatest win, but even this brought Bobby Fischer little peace.

Matthew Price, a regular contributor to the Globe, can be reached at priceald@yahoo.com.