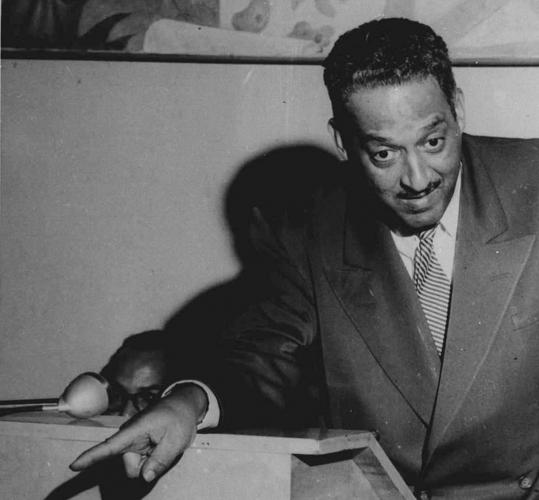 Talking to journalists in New York in 1955, Thurgood Marshall was chief counsel of the NAACP. In 1967 he became the first African-American named to the Supreme Court. (Associated Press/File)
By Kenneth J. Cooper January 17, 2011

A courageous Rosa Parks refused to give up her seat on a segregated bus, and a young Martin Luther King Jr. became a hero and leader of the civil rights movement by steering a black boycott of public transportation in Montgomery, Ala. But behind the scenes, an aggressive, veteran lawyer for the NAACP, Thurgood Marshall, helped hone the boycott’s objective into a lawsuit that brought victory in the US Supreme Court in 1956.

Initially, King’s goal was more polite treatment of blacks riding in the back of the bus. Marshall informed a local lawyer that the NAACP would support only legal action to integrate the buses, counsel that King and other boycott leaders accepted. The NAACP and its chief counsel would not participate in maintaining segregation in any form. A decade earlier, Marshall had advised a Texas civil rights activist, “It is one thing to ‘take’ segregation that is forced upon you, and it is another thing to ask for segregation.’’

Thank Michael G. Long for bringing to a wider public that bit of inside byplay of the civil rights movement and many others in his well-edited collection of Marshall’s letters from 1935 to 1957, which are archived at the Library of Congress. Long, a professor of religious studies and peace and conflict studies at Elizabethtown College in Pennsylvania, assembled a selection of correspondence to and from Marshall that is full of surprises.

There is Marshall, the year before the country entered World War II, complaining to Secretary of War Henry Stimson about segregation in the military, which extended to excluding black men from enlisting in the Army Air Corps. He disputed Stimson’s argument that integration would damage military unity — a contention that echoes the recent debate over “don’t ask, don’t tell’’ — and countered that ending segregation would actually unify the country behind its defense. When a separate air base was established in 1941 to train black pilots, the Tuskegee Airmen venerated decades later, Marshall disparaged the “Jim Crow air corps,’’ in keeping with his anti-segregation stance. He slapped a similar label on black law schools in Missouri and Texas established while the “separate but equal’’ doctrine prevailed.

The origin of the phrase “affirmative action’’ is often traced to an executive order on federal contracting that President Kennedy issued in 1961. At least 20 years before that, Marshall was using the term, which appears a half-dozen times in these letters, though in the broader sense of government action to protect black citizens from acts of racial violence and violations of their voting rights. Appeals to federal officials for such protection recur, and their responses shaped Marshall’s opinion of them. He was an admirer of Harry Truman, but not of Franklin Roosevelt, Dwight Eisenhower or, initially, Senator Lyndon B. Johnson, who in 1967 nominated Marshall to the Supreme Court. He called Francis Biddle, Roosevelt’s last attorney general, “a skunk’’ for not prosecuting perpetrators of lynchings, and wrote to NAACP chief secretary Walter White of FBI Director J. Edgar Hoover, “I, however, have no faith in Mr. Hoover or his investigators, and there is no use in saying I do.’’

Thurgood Marshall the NAACP lawyer comes across in his letters as an advocate of unflagging commitment with a fighting spirit. He advised a Texas NAACP leader that the Dixiecrats who upheld segregation could only be defeated by “hitting back at them every time we can in every way we can.’’ In a 1940 report from Birmingham, Ala., to his boss, White, Marshall concluded, using the language of the day, “I’m all for these Negroes down here. They want to fight.’’

So did Marshall — in court.

Kenneth J. Cooper, a Pulitzer Prize winner and former Globe staffer, is a freelance writer in Boston. He can be reached at kenjcooper@verizon.net.