Retracing the story of the Tea Party, the patriots’ act of defiance in 1773 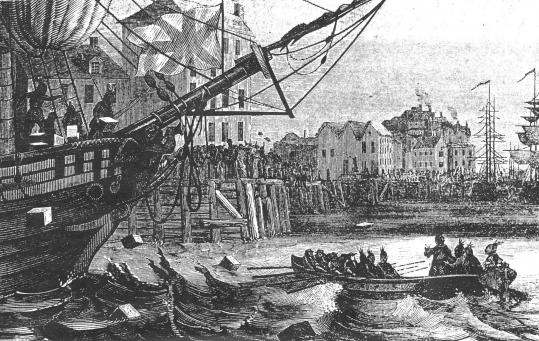 Despite the rise of the Tea Party movement, no one can be sure whether it will remain a political force in the future. But its appropriation of the Boston Tea Party of December 1773 bears witness to the enduring symbolism of that iconic event in American history.

No question that the Boston Tea Party was a trigger for the Revolution, writes Benjamin L. Carp in his sterling account of the event. But, argues Carp, a professor of history at Tufts University, it was not the spontaneous citizen uprising of historic myth. After the success of the Revolution, it vanished from public memory until well into the 19th century.

Carp’s account of how the crisis unfolded is particularly good at illustrating the politics that pitted the “friends of government,’’ led by Governor Thomas Hutchinson, against the Sons of Liberty, including Samuel Adams and Joseph Warren. His account details the efforts Boston’s patriot leaders made to defuse the looming crisis over the British imposition of a tax on tea, a crisis that would heighten with the arrival of cargoes of tea.

The first tea ship, the Dartmouth, arrived on Nov. 28 and had a deadline of 20 days — Dec. 17 — to clear customs. Twenty days, writes Carp, “for the Sons of Liberty to resolve the issue,’’ while three British warships were “[a] menacing presence in the harbor.’’

The negotiations involved the patriot leaders, the colonial government, the ship owners, and even volunteer negotiators like the painter John Singleton Copley, son-in-law of one of the tea merchants who had fled to Fort William (now Fort Independence on Castle Island). Copley rowed out in an unsuccessful attempt to get the cargo returned to England.

With the board of selectmen unable to resolve the crisis, unofficial authority fell to “The Body of the People,’’ townspeople and merchants, who gathered first at Faneuil Hall, then, as their numbers grew, at the Old South Meeting House. On Dec. 16, with the final deadline just hours away, meetings were suspended to allow ship owner Francis Rotch to ride out to Milton in an unsuccessful attempt to get Governor Hutchinson to allow the tea ships to return to England.

What ensued, Carp writes, was “a carnival of commotion,’’ as a group of some 20 young men disguised as Mohawks entered the meeting house and led the way to the waterfront where they boarded the tea ships and dumped the cargo, some 340 chests of tea, into the harbor.

A still “elusive’’ mystery, writes Carp, is the identity of the “Mohawks,’’ and even of who organized them. The actual participants, he writes, “kept the secret to their graves.’’

From the 1850s on, Carp notes, there were occasional uses of the Tea Party imagery by, among others, Abraham Lincoln (in arguing the case of women arrested for destroying a saloon) and Martin Luther King Jr. (in his “Letter from a Birmingham Jail’’).

In “The Whites of Their Eyes’’ (Princeton University), Jill Lepore provides lively reportage of the current Tea Party movement in its historical context.

Lepore, a Harvard historian, is also a staff writer at The New Yorker, where parts of the book were originally published. In her account, reenactors share the stage with Founding Fathers, or as the sign spotted at one rally put it, “Party Like It’s 1773.’’

The Tea Party will always be controversial, writes Carp, as it was “a nonviolent act with a distinct air of menace.’’ And even as it “stands as a dramatic example of popular sovereignty in action,’’ he adds, “it is a legacy that Americans and other peoples sometimes reject and sometimes embrace.’’

Michael Kenney can be reached at mkenney777@gmail.com.

DEFIANCE OF THE PATRIOTS: The Boston Tea Party & the Making of America