In her new book, the Cambridge resident offers portraits both visual and verbal 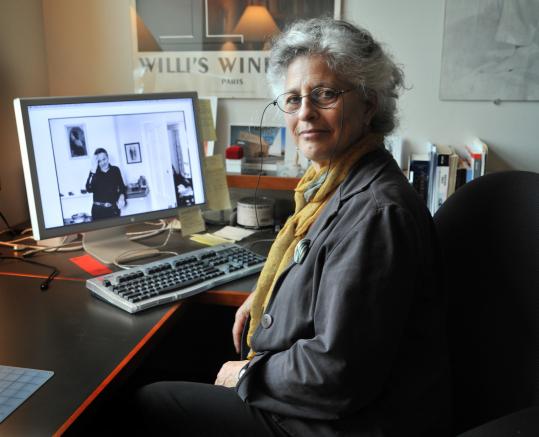 Q. You knew many of the subjects you photographed for the book. Is that harder, or easier, than shooting people you don’t know?

A. It’s not so much a matter of knowing them or not knowing them. What I try to do is notice some gesture or action they’re prone to. I try to observe some little quirk and work off of that, preferably one they’re unaware of. So [the poet] Robert Lowell did not know he was holding his coffee cup the way he was and, in effect, using it as a prop. That became part of the portrait.

Q. You mention Lowell. Your subjects are primarily literary and academic figures. Some of them — Lowell, Saul Bellow, Norman Mailer — must have been pretty daunting to be around.

A. It was fine, really. I don’t feel intimidated, because I’ve got the camera there. I’m trying to do something other than keep them entertained. I also try to have another person in the picture — a spouse, children, professional collaborators. I encourage them to talk and look at each other instead of looking at me.

Q. You’ve had an unusual history as a photographer. Originally you studied city planning, and now you teach graphic design, at Simmons. You started working as a photographer for the Sunday Telegraph Magazine, in London, in the ’70s.

A. Yes, and one of the wonderful things about working as a photographer for a newspaper is that when you get sent out on assignments you’re often accompanied by a writer. So I could study sitters while they were with the reporter and photograph them while talking to him instead of posing for me. Also, my editor liked the idea I was American. With that in mind, he’d do things like send me to [the actor] Ralph Richardson’s wonderful house in Regent’s Park [in London] and I’d be so unknowing I wouldn’t feel nervous.

Q. The “likenesses’’ in your book are verbal as well as visual. You wrote 17 of the accompanying texts, out of 36. Did that add to your pleasure in doing the book or detract from it?

A. Well, I don’t think of myself as one of the great writers [laughs]. Originally, I was asked by the publisher to write a little something next to each of the pictures. I said, “I can’t possibly do it. I’m not an interesting enough person. I am not a good enough writer.’’ Then someone suggested I ask the sitters to write about each other. That made a lot of sense to me. It also felt distinctive and original. In some cases, I ended up writing the text myself, as you mentioned — but not so much that it became a chore.

Q. Do you have a favorite portrait in the book?

A. Oh, I have several. One would be the photo of [the actress] Joan Plowright. She’s there on the beach with her children and dogs. It looks so different from the rest of the portraits.

Q. Here’s an unfair question. Is a picture worth a thousand words?