A lost son of Israel

In his profound new novel, David Grossman explores the grieving soul of a nation in conflict 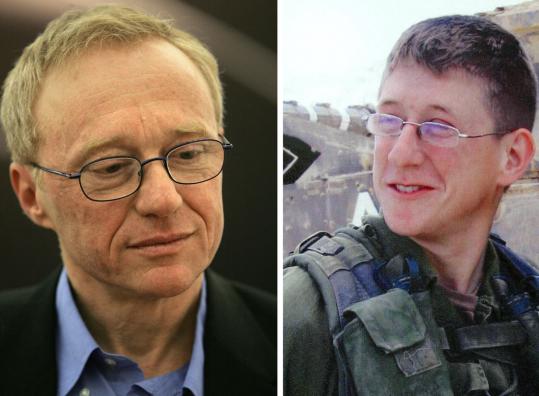 In recent years, through a series of tragic events, the Israeli novelist David Grossman has become more a part of the story than its teller. Grossman’s son Uri, a soldier, was killed on the last day of combat of the 2006 Lebanon war, and Grossman engaged in an acrimonious, yet strangely tender, public battle with then-Prime Minister Ehud Olmert over the necessity of the incursion. Since his son’s death, Grossman has become more than a novelist; he has become the public face of the shriveling Israeli left, its icon of sacrifice and valor and moral outrage.

Now, Grossman’s novel “To the End of the Land,” written while Uri was serving in the Israeli Defense Forces, and completed after his death, has been published in English, and it can be difficult to resist looking for biographical parallels between the life of the writer and his tale of a family fearing the loss of a soldier son. There is, however, a larger, more profound sense of finality to Grossman’s work; it is not merely a single soldier who is facing death here, but an entire country. Is the book’s title a place? A time? A drinking toast? Is this the musing of an anguished father sure that the end of his son’s story is the end of everything, or something more specific? The answer shifts with the book’s moods, and its characters, but that mournfulness — the sense of an ending — never entirely evaporates.

Like its back story, the book is rooted in the workings of a family — in this case, the middle-aged Ora, her estranged husband, Ilan, and their two sons, Adam and Ofer. Ofer, wrapping up three years of mandatory military service, voluntarily re-enlists to fight in Gaza, skipping out on a hiking trip he and his mother had been planning. Ora, superstitiously convinced that staying home means leaving herself open to receiving word of Ofer’s death, decides to flee into the wilderness. She also brings along the shadow member of her family: the damaged Avram, her adolescent love and Ofer’s absentee biological father.

Avram and Ora walk the length of Israel, first fleeing Jerusalem, and then retracing their steps in search of home. As they walk, Ora attempts to share stories of Ofer, hoping to resuscitate Avram’s flagging interest in the world beyond his own painful memories of thwarted love and his time as an Egyptian prisoner of war. “How do you tell an entire life?” Ora wonders, and the sheer inadequacy of words to summon the mystery of human existence is a recurring motif, and a nagging reminder of Ora’s anticipatory mourning. Ora knows she cannot do justice to her son with words alone; and yet she fears that words — those limp weapons — may be all she is left with. All her anecdotes, her tics, and her protective amulets reflect a primal fear of loss: “What am I doing, she thought. I’m telling the earth about him. And she realized with horror: Maybe I’m preparing her for him, so she’ll know how to take care of him.”

Ora the eternal mother is giving birth once more, not to a son but to the memory of one: “By evening the pain of him became so strong that she shut herself up in her tent and sobbed quietly, secretly, trying to muffle the noise. The contractions — that was how she felt: they were like labor contractions — came frequently and sharply and grew into a constant, blinding pain . . .” The presence of Avram, a willfully blank slate, prompts Ora to sketch in the details of her family. By retelling her story, she is, she believes, preparing once more for the end: “She realizes what she’s been doing here all these days: reciting a eulogy for the family that once was, that will never be again.” Avram is, at once, an avatar of personal regret for Ora, and a reminder of what Israel — what any country — is capable of doing to its sons.

That eulogy is also a preemptive lament for a lost son. Ora fears that Ofer is destined for death, but as her story spills out, it is less the end of a life that she fears than the extinguishing of a conscience. She watches, helplessly, as Ofer is “nationalized” into military duty, his boyhood sensitivity to others’ pain replaced by a gruff military smugness. Knowing it is useless, Ora fights her family and her country nonetheless, pitting her nagging feminine sense of wrongdoing against their “annoying, exasperating male wisdom.”

Near the end of the book, Ora remembers a long-ago stroll she took with Avram through downtown Jerusalem: “They passed the jumble of shops on Jaffa Street, the Sbarro restaurant, and then Zion Square, where a booby-trapped refrigerator had blown up in 1975, killing, among many others, the artist Naftali Bezem’s son, whom she’d known in the army. Ora wondered if Bezem had been able to paint after his son’s death.”

Having crafted a symbolic representative of the grieving Israeli soul, Grossman has her glance, as if through a cracked mirror, at her own creator. Grossman has not let death stop him from creating, but there is little optimism left in his portrait of his native country. What there is, instead, is an inversion of Zionism’s famous credo, and a lingering sense of approaching doom: “Okay, it’s all very well to say, If you will it, it is no dream, as Herzl said, but what if you stop willing it? What if you can’t be bothered to have the will anymore?”

Saul Austerlitz is the author of ”Another Fine Mess: A History of American Film Comedy.” He can be reached at swa20@gmail.com.

TO THE END OF LAND

Translated, from the Hebrew,